If you remember from my last post about the bees they had been ‘mis-beehaving’. I had performed an artificial split only for the half without the queen to be a little lax in creating a queen cell while the haf with the queen swarmed anyway leaving no queen cell behind. I think my actions have helped sort things out though. The stronger half without the queen did eventually build a queen cell and I donated some eggs from that half to the other half which then also created a queen cell. I’ve left them alone for the best part of 6 weeks in the hope that they would successfully re-queen and start laying. Last weekend was pretty much the first time I would expect to have seen evidence of this.

It was a lovely day on Monday so I decided to take a look to see what they had been up to. No doubt they wold have been mis-beehaving again and things wouldn’t be as we hoped.

I started with ‘Hive 3’ right at the bottom of the garden. This was the hive that contained the half of the split that had the original queen. She had however since disappeared taking half the bees with her. I had donated some eggs from the other half to what was left of the colony. As expected there weren’t many bees when I opened up the hive. There also wasn’t any sign of a queen either. I did then notice a small cluster of about 50 bees below the mesh floor. I wasn’t sure what they were doing there but decided to scoop them off and take a look. They were quite happy being scooped up. I gently tipped them onto the top of the brood frames. I was hoping that maybe there would be a queen amongst them and sure enough there was.

The bees in this hive have been using a small gap at the back of the hive to come and go rather than the proper entrance at the front. We’ve just left them to it as it wasn’t doing any harm and the front entrance was still open anyway. I’m kind of hoping that maybe the virgin queen had left through the small gap at the back on her mating flight and was then too fat and fertile to squeeze back through it when she returned. Perhaps she had then ended up under the hive instead. You could of course describe her as too stupid to find the other entrance as well! 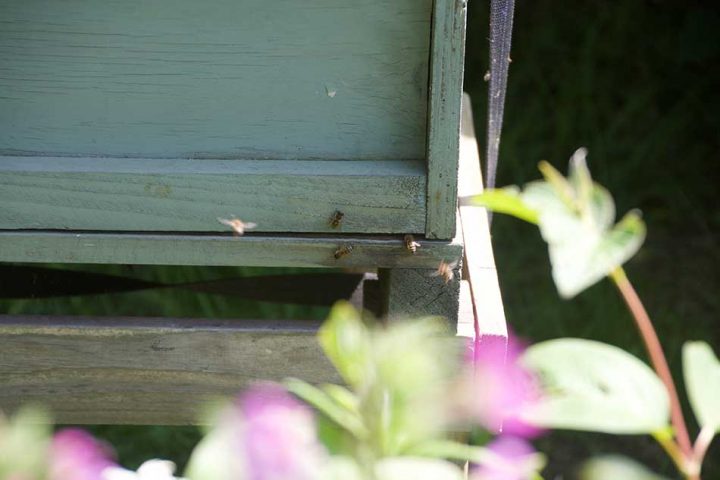 I marked her so that she should be easy to find next time, made sure she was safely in the hive and closed it up. I’ll check in on them in the next day or two to make sure she is still safely in the hive. Hopefully she is a mated queen and will now start laying. The colony certainly needs some young bees on the way as it is a very small and weak colony at the moment

Hive 1 which contained the swarmed half of the split was looking good. The brood box contained about 3 full frames of sealed honey and then another 5 or so frames of brood. There were eggs and some very young larvae so it looks as though the queen had started laying right on cue over the weekend. I spotted the queen in amongst the rest of the bees so caught her and marked her. She was quite big which is hopefully a good sign. There were quite a few bees in here as well so things are looking up.

Obviously we don’t want them swarming so I might give them some more space by putting them on a brood and a half configuration. We often do this over the winter anyway. The worry is that the frames of honey in the brood box might restrict the space for brood which could then lead to swarming tendencies. I could remove the honey frames and replace them with empty frames but that seems a little mean. I also think that bees prefer to build brood vertically rather than horizontally so putting them on a brood and half set up will give them room to do that should they so wish. It will make inspecting a little more difficult and may mean that they won’t store much honey in the honey super at the top of the hive but if it allows them to get stronger then it’ll be worth it.

All in all not a bad inspection and it seems for once that the bees may actually be ‘beehaving’ for a change.

Elsewhere things are looking good in the garden too. The raised veg patch has gone mad. The Rhubarb is massive, the courgette plants are unstoppable and the nasturtiums have run rampant. The strawberries are fighting back and trying to take over though and the beans are going well too. The broccoli has a battle on it’s hands to keep up but seems to be coping!

In the flower borders there is colour galore. You can’t beat the garden in summer