You may recall my recent post about Beetroot Juice for Triathletes and how the high level of nitrates in natural, organic, healthy beetroot juice can improve athletic performance. I’ve been drinking it for a while now and have developed quite a taste for it. I actually look forward to my delicious glass of beetroot juice with lunch everyday.

Well, I’ve gone for the stuff whole-heartedly now and I’ve been offered an Elite Package from Beet-It.

Beet-It came up with this deal during discussions with the England Rugby team and are now supplying most of the UK Premiership Football teams, a lot of Team GB, the New Zealand rowers, and quite a few of their Olympic teams as well – all on the elite package. I’m now in on the deal as well and have just taken delivery of ‘shed-loads’ of the magic ‘purple power potion‘.

In addition to the standard Beet-It Organic Beetroot Juice that I like so much, I’ve also got a case of the Beet-It Organic Shots – the ones that all the performance testng have been centred around and also the new Beet-IT SPORT shots which have just launched – According to my contact at Beet-It these new SPORT shots have a 33% increased nitrate content making them significantly more suitable for sport than the organic shots, and I am the first of their athletes to have access to them.

As I said in my previous post, it’s difficult to tell if beetroot juice actually has any performance benefits, but all of the scientific testing seems to point to the fact that it does significantly improve performance and recovery. That sounds good to me and as it is nothing but natural, organic vegetable juice then it can’t do much harm so I’m willing to accept the scientific studies and give it a go.

I’m now expecting my trips to the bathroom to be more colourful than usual! 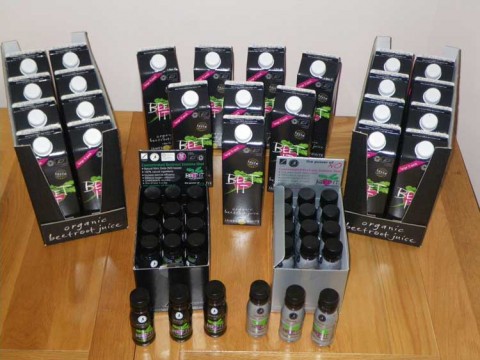