Who’d would have thought it, after a solid twelve hours under wall to wall sunshine in the garden yesterday, there were some snow flurries on my run this morning!

It was pretty chilly out there running around the hills behind Machynlleth but I managed to cover 9 miles up and over a pretty big hill. Other than the few snow flurries towards the end it was dry and the wind wasn’t too bad either so I can’t complain. I also wasn’t running anywhere near the distance to thousands were in London today.

It was then into to pool for a fairly hard swim consisting of 30 x 100m with each 100m in 1min 30secs or less, and all with 20 seconcds ‘rest’ between them. With that over and done with it was time for a coffee and bacon sandwich in the cafe before heading home and then off to the tip.

The task at the tip was extracting all of the junk I had managed to lock in the car yesterday, but the twist was that it all had to be done via the passenger door. We couldn’t use the back door as it was jammed shut and we were unable to get to the latch on the inside until we had emptied the car. Bikes, wheel-barrows, bags of rubbish and loads of pots of paint all had to come out the hard way. It wasn’t actually that bad and it didn’t take long which was good as it was now a dreary, drizzly day.

After a quick stop for some supplies it was back home for lunch and then some more baking. Cake of the day today was Banana Muffins from a Nigella Lawson recipe. We haven’t tried them yet but they smell nice even if the recipe only made ten of them. It’s nice having the house smell of freshly baked muffins. I think they will be a little less sweet than the Baklava muffins we’ve been eating recently – I’ve made a few batches of these now as they were so nice – but the banana muffins will probably be delicious served warm with some butter on them. 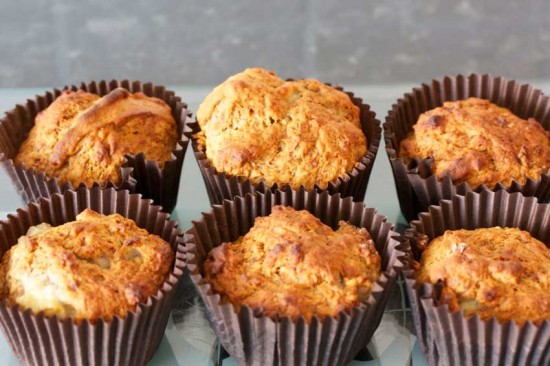 I’ve also made some secret peanut butter and chocolate squares which are in the fridge cooling – Now these really are going to be sweet and very very rich. They contain little in the way of ingredients other than peanut butter, chocolate, butter and sugar, along with some more sugar and butter for good measure! Nothing healthy about thee little beauties! I think they’ll taste like Snickers bars, without the caramel and maybe a little richer – They certainly won’t help me get to race weight that’s for sure!

I’ve also got chicken breast marinading in a yoghurt and curry sauce in the fridge which I shall bake soon to hopefully make a tasty saucy chicken dish that I’ll serve later with rice and some vegetables. I’m looking forward to dinner, complete with two puddings already.