Morgan and I try to get in at least one days worth of geocaching during the school holidays and always seem to enjoy ourselves. Yesterday was no exception and gave us chance to try out the Geo Bucket geocaching iPad app properly.

I’d noticed that with thousands of geocaches in its database Geo Bucket seemed to be running a little slowly. So, before setting off I deleted all of the caches and re-downloaded just a couple of hundred based around Machynlleth. We then packed a bag with food and waterproofs before heading off in the car.

Our first cache of the day was unfinished business with the Roman Stomp series. We did about 5 of this series last time we were out geocaching, but due to the rain had missed one of them. First stop therefore was this one which we found quickly and easily and we were off on a roll.

Next was another quick cache and dash along a roadside where we found a cache hidden within a pine cone – I won’t tell you which one it was so as not to give anything away, but here’s a photo of the cache container. 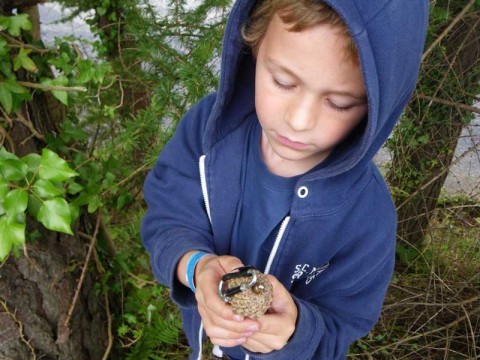 We then drove to a suitable parking space behind Machynlleth and walked out across some fileds to another cache in a nice fake pebble container. Again I won’t tell you which one it is as here’s a photo of Morgan with it. The geocache was in a lovely spot but only a short walk from the road. Just the sort of cache we like as they take you somewhere you haven’t been before but aren’t too difficult. 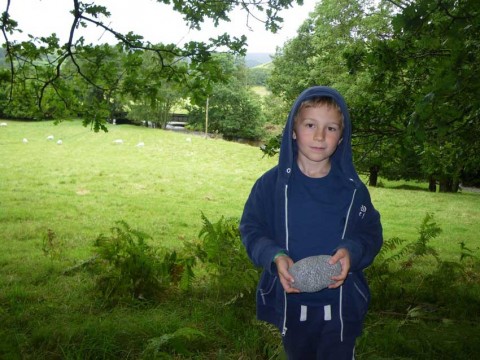 Our next plan was to head to the ‘Heavenly Aberhosan’ cache which sounded as though it involved a bit of a walk up a hill but would reward us with some spectacular views. We decided that we would treat ourselves to a picnic after finding the cache. The walk up the hill was only short and it wasn’t even very steep so it was much easier than we were expecting, but the views didn’t disappoint and nor did the picnic. Although, the wind had picked up quite a bit by now and it was feeling chilly so rather than picnicing in the sunshine we huddled behind and the trunk of an oak tree trying to shelter from the cold and wind.

After lunch we headed into Machynlleth to buy some ingredients for dinner and then did one more cache on the cycle / foot bridge over the river. We’d hidden a cache in this exact same spot ourselves a few years ago but it kept going missing so after several maintenance attmepts we disabled it. It’s therefore good to see a new cache , albeit a tiny micro, in its place. A micro is probably a better option here though as it will need less maintenance.

So, that was that another successful days geocaching and a few more caches under our belts. The Geo Bucket iPad App worked well and we had a good day out in the Welsh countryside.

Back at home it was a frantic rush to fit in a turbo trainer session and then cook dinner and clean the house before Anna came home from work. We just about managed it though and had a delicious curry ready and waiting and even had a little vase of flowers on the table for her as well – picked from the garden of course.