Another good days racing thanks to the Welsh Cyclocross Series. This weekend sand was the order of the day as we rode through the forest and out onto the sand dunes at Pembrey Country Park. I had stayed in the van overnight as I had been racing my mountain bike for 6 hours on Saturday evening in the Tide to Tide event. Not ideal preparation for a Sunday cyclocross race but that’s been the case for pretty much every cyclocross race so far this year. Last weekend I’d been surf-skiing in North Wales before the race, the weekend before that had been a quadrathlon in Cornwall, no doubt there was something going on before the first race of the season as well. The Vet 40’s cyclocross races only last around 40 minutes so I thought I’d survive it.

The weather was awful though. I barely left the van all morning as it was pouring down outside. I did pop out to the toilet and to get my bikes off the bike rack but that was about it. I also braved the rain to register and get my timing chip and race number. Otherwise I was snuggled up with cups of coffee and a book waiting until it was time to get ready.

As the 12:15pm start time approached I ventured outside, left a mountain bike in the pits and then had a little ride around the course with everyone to see what it was like. It seemd fairly flat, quite fast and with a long, tricky sandy section through the dunes. I’m not sure I was looking forward to the sand but the rest seemed fine – if my legs were up to it. They felt OK cycling around but I wasn’t sure what they’d do under pressure.

We were soon lined up. We are seeded based on our overall standings in the series. You gain points at each race you finish based on your finish position. At the end of the year your top 7 finishes count towards your overall score. Obviously at this stage of the season, with only 4 races completed so far, the more races you’ve done the more points you’ve got. Having done all of them I was actually on the second row, but I was surrounded by the usual faces. I also made my usual excuses – this weekend it was the fact that I’d done a 6 hour MTB race the day before.

We were soon off for the usual frantic start.

As always, I do fine off the start line, make up a few places, only to lose them all again as we slow down for the first bend. Today it was only a short dash to the first corner. People streamed past me as I gingerly made my way around the 180º bend. This was immediately followed by another 180º grassy turn and then another. Needless to say I lost a few places on both of these as well. I gained a few on the long flat straight after this and then settled into a nice pace. I didn’t want to go too hard today on the first lap. Last week I started out too hard for the first lap or two and then struggled towards the end. Not only was this a mistake tactically but it wasn’t much fun either. Today I took it a little too easy on the first lap. I wasn’t sure how my legs would hold up after the previous days exertions and I didn’t want to feel terrible towards the end again. I lost quite a few places on the first lap but then as I got into things started to gain some back. By the time I was on my 2nd lap I had sussed out the best lines for me through the sand and started to get the hang of it. By laps, 3, 4 and 5 I was actually looking forward to the sandy bit and rode it well.

Other than the first lap which was too slow, my lap times remained fairly consistent at around 9½ minutes.

I even managed to feature in a few photos taken by Rob Warren. Are you impressed by my green and black colour coordination? Even down to the socks! 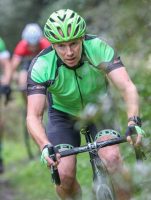 Al in a Cyclocross Race

Cyclocross through the trees