I did another Open Water swim in Abeyrstwyth last night. This time it was to check out a suitable course for the up-coming inaugural Aberystwyth Sprint Triathlon. Conditions were wuite different to my last swim here with increasingly strong winds from thr SW making the sea quite choppy and a little bit of swell as well.

The planned route for the course was to start from the beach just to the south of the bandstand, swim out to a buoy about 300m offshore, around it and then swim North past Bath Rocks, around another buoy and then back to the beach to the north of Bath Rocks. We’d estimated that this would be about 750m, the planned distance for the course so I was going to measure it to see.

The tri club were swimming tonight so we split into two groups with the faster, more confident swimmers coming with me. We set off into the swell and chop and immediately lost sight of the buoy. We knew we would, but it was impossible to see it from the water, not helped by the glare from the setting sun. We did find it in the end and I waited for the other swimmers to catch me. I was drifting North past Bath Rock pretty quickly as I waited so had to swim back towards them a little. By the time we re-convened and had a little chat there wasn’t really any need to swim north anymore so we headed back into to the beach and the proposed exit point. 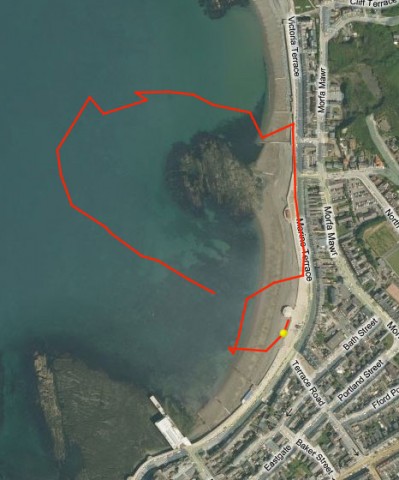 Total distance at this point on my 910XT was 0.57 miles, a little over the 750m we were hoping for, but I had done a few little extra bits whilst waiting for and swimming back to the others.

However, back at the beach it was clear that some people thought that such a route was a little too challenging. I guess for novices it would be due to the fact that it is difficult to keep your bearings and if its rough there is some swell and chop to contend with, so it looks as though we’ll stick to a course within the confines of the Bay. In some ways this will be better not only for less confident swimmers but also for spectators too. It’ll just mean we need a few more buoys and I’ll have to go for another swim sometime soon in order to measure it – That’s not too much of a chore though, especially at the moment with the water so warm.

All of this was followed by coffee and cake from PD’s Diner on the prom and then listening to Anna playing in the Silver Band in the Bandstand – They were on form tonight with the audience dancing around the bandstand to ‘Is this the way to Amarillo’ and a singing dog!