Using an SLR with a Skywatcher Explorer 130M Telescope

I’m really keen to take some photos through our new telescope. I knew this wouldn’t be easy. The world of astro-photography is complex with many diverse techniques that need to be learnt, practised and perfected. Some of the photos you can achieve are truly outstanding, but I think it will be many years before we get that good at it.

It would be great to get just a few basics shots though so that I can share some of what we see through the telescope here on our weblog. Ultimately the goal will be to use astro-photography to reveal astronomical objects that can’t be seen visually through the telescope. Long exposure astro-photos can reveal much more detail and resolution than can be seen with the eye, and some exposures can be taken over several hours, allowing objects that are far too faint to be seen with the eye to be recorded on the cameras sensor / film.

As you can imagine, there is a learning curve, and a steep one at that. We should really start using just and SLR on a tripod, taking photos of things such as constellations and star trails, then progress onto longer exposure SLR photos with the camera mounted piggyback on the telescope, before moving onto prime focus SLR photography where you attach the SLR camera directly to the telescope and use the telescope as the camera lens.

I will of course do all of this, but being the impatient type with a digital SLR and a new telescope, I can’t wait to connect the two and see if I can take photos – even fairly basic ones – of what I can see through the telescope. However, simply attaching the SLR to the telescope hasn’t proved to be as easy as it should have.

The  physical connection is actually very simple. The eyepiece holder on our Skywatcher Explorer 130M telescope has a T-Mount thread on it, so with the purchase of a simple T-Mount for my Canon EOS 350d SLR camera, the two can be connected. I just have to remove the eyepiece(s) from the telescope, screw on the T-Mount and then connect the camera body to it. Nothing could be simpler and the fact that the eyepiece holder on the telescope has this thread would suggest that it was designed just for this. 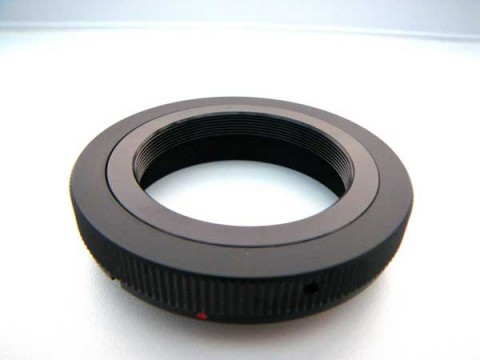 So, my T-Mount  arrived and I was excited to try it out. I attached the two, pointed the scope at the Moon and tried to focus using the Live View image on the cameras LCD. The best focus I could get was by moving the focuser all the way into the telescope as far as it would go, but there just wasn’t enough inward travel to achieve proper focus. I’ve since done quite a bit of research into this and it seems to be a problem that everyone has with this telescope. Despite the ability to physically attach an SLR to the eyepiece holder, there isn’t enough inward movement on the focuser to achieve focus, all you get is a blurry blob where the Moon – anything else for that matter – should be.

Now, amateur astronomers and astro-photographers are of course a resourceful bunch, so there are many possible solutions to this problem. Some sound a little drastic to me, others have their pros and cons and I’ve come up with one or two myself as well.

Simply placing a barlow lens into the eyepiece holder of the telescope and attaching the camera to this should allow focus to be achieved. The barlow lens increases the focal length of a scope, so the point at which focus occurs is extended out of the scope focuser a short distance.

In order to do this an additional (inexpensive) T mount adaptor needs to be purcahsed. This slots into the barlow lens and has a T mount thread on the end of it which allows attachment of the T-mount and camera to the telescope. Alternatively, some barlow lenses themselves come with a T-mount thread built in (2x barlow lens with built in T-Mount thread). I’ve heard that using a barlow lens with a T-Mount thread on it rather than a T adaptor is better, because it is possible that the T adaptor will again add some distance between the camera and the telescope taking us back to square one where there isn’t enough inward travel available on the focuser to achieve focus even with the barlow lens in place.

It should be noted of course that the barlow lens’ primary function is to provide magnification resulting in a reduced field of view. This may or may not be an issue depending on the types of objects you want to photograph.

Some people have moved the primary mirror of the telescope up the tube, closer to the secondary mirror. This has a similar effect to that of using a barlow lens as it moves the focal point of the telescope further out of the eyepiece. In many cases longer bolts have had to be used to move the mirror far enough, although some people have achieved focus by only moving the mirror a few millimetres. The mirrors do of course need re-collimating after moving them and this sounds like a modification that is just a little too involved for me as a beginner at the moment. It does work, but the main issue other than the work involved is that once the mirror is in a position that allows the camera to reach focus, there then often isn’t enough outward movement on the focuser to achieve focus with some eyepieces.

There is a good thread on the subject here: Going to mod my Skywatcher 130P

Another fairly drastic approach would be to modify the focuser on the telescope. Buying an alternative focuser that has more inward movement would work. These however are very expensive and I’m not sure which ones would work as a replacement.

The other option is to modify the focuser that comes with the Skywatcher 130 telescope. The focuser itself is actually a fairly simple, mainly plastic affair that consists of a plastic cylinder with an eyepiece holder inside a plastic housing. The housing is attached to the telescope and the cylinder is moved up and down within the housing using a simple rack and pinion mechanism. The factor that limits the inward movement of the assembly is the eyepiece holder hitting the plastic housing of the focuser. There is actually about 12mm of plastic housing above the rack and pinion mechanism that could be removed without affecting the functioning of the focuser. This would allow an additional 12mm of inward movement that maybe enough to achieve prime focusing with an SLR attached to the eyepeice holder. 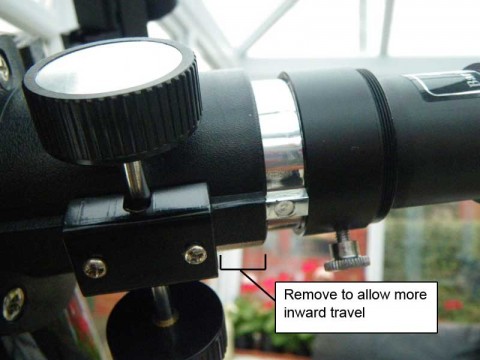 I don’t want to take a hacksaw to our new telescope quite yet, but this does seem like a modification that would work without causing any other issues.

Using a thinner T-Mount may be one of the simplest approaches. The T mount I have is quite thick and probably moves the camera about 10mm away from the telescope. It may be possible to find low-profile T Mounts that allow you to attach your camera to the telescope without this additional thickness, although I haven’t been able to find one. They do have to be a certain thickness and move the camera a certain distance from the eyepiece assembly to prevent the cameras mirror fowling on the assembly though. More research is needed here.

Reducing the Size of the Eyepiece Holder

The Eeypiece holder of the Skywatcher 130M is removable. It is an aluminium ring that screws onto the plastic focusing tube. It therefore has an internal thread that matches that of the thread on the plastic focusing tube, two grub screws through its main body that hold the eyepieces in place and then (as already mentioned) an external T-Mount thread on the other end that allows a T Mount to be attached to it.

As you can see, the eyepiece holder itself is fairly tall (22mm). Someone fairly handy at engineering such things could probably produce one that is half the size. Again, this would allow the camera to be mounted 10mm closer to the scope which might provide enough inward movement to achieve prime focus with an SLR.

Another option would be to attach the camera to the telescope using a digiscoping attachment. In effect this mounts the camera, complete with its own lens in front of the eyepiece of the telescope so that you can take photos through the eyepiece. Whilst this might seem like a goo idea, I doubt that the eyepiece assembly, or the telescope mount would be robust enough to hold a large SLR camera and its lens in this way. It would probably be OK with my small compact camera, but I then lose the detailed exposure controls available through the SLR.

As you can see, there are lots of options to try, some have fewer issues associated with them than others, some are a little more destructive than others. I haven’t quite decided what route I’ll take yet – probably the easiest, cheapest and least destructive is the barlow lens with built in T-mount thread so I shall start with that. If I can find someone who can make me a low-profile eyepiece holder then that may be my next plan of attack. I’ll let you know how I get on.

It is however a shame that this is such an issue, the fact that the Skywatcher Explorer 130M telescope comes with an eyepiece holder that has a T-Mount thread allowing for direct SLR attachment and prime focus astro-photography would seem to suggest that it would be suitable for such a purpose. Unfortunately, out of the box it isn’t, but with just a small modification to the focuser it would be, so its a shame that the manufacturers haven’t addressed this.