Andromeda through my Meade 15mm Eyepiece

Christmas may only be a distant memory now, and my birthday was a couple of weeks before that, but one of my birthday presents was a Meade 15mm eyepiece for my Skywatcher 130 telescope. I have briefly used it once or twice since then but Sunday night was the first time I got to use it properly. This isn’t my fault though, its been purely a factor of the weather and Sunday night was the first properly clear night for months.

I started off with a quick look at the moon. The Skywatcher telescope came with a couple of stock eyepieces, a nice wide-angle 25mm lens and a more powerful 10mm lens. The 25 mm lens has been OK, providing some nice views of the moon, the planets, binary stars, various star clusters and the Orion Nebula. The 10mm lens isn’t great though, Views through it are very dim and it it difficult to get any decent focus with it.

I also have a couple of 2x barlow lenses and tend to use the barlow with the 25mm lens to effectively give me a 12.5mm lens for those times when I wanted a little more magnification. It’s not far off the magnification of the 10mm lens but worked better. The new eyepiece fits in between these at 15mm but is much brighter and clearer than the stock eyepieces. I can of course use it with the barlow lens as well to give me a 7.5mm lens so now have quite a range: 10mm, 15mm, 25mm and then with the barlow lens: 5mm, 7.5mm and 12.5mm.

Last night I started off with some views of the moon and the new 25mm lens was perfect for this. The moon virtually filled the angle of view and was clear and if anything a little too bright – I’m now going to need a moon filter! Features were much sharper than through the other lenses though. Jupiter was looking good too with the bands clearly visible along with a few of the Galilean Moons.

Morgan and my Dad come out for a look as well so I decided to see if I could find Andromeda. I’ve never actually ‘seen’ Andromeda through the telescope although I did manage to get some photos of Andromeda last year simply by aiming the telescope with the camera mounted piggyback on it at the right bit of sky and taking some photos. I’ve since tried lots of times to actually see it through the telescope but without any luck. Tonight I pointed the telescope at the right bit of sky, took a look through the eyepiece and there it was. It was quite exciting to have finally seen it with my own eyes. It may only be a fuzzy patch through the telescope but knowing that you are looking at a spiral galaxy that is roughly 2.5 million light years away is amazing. That little bit of light creating the fuzzy patch in the eyepiece is coming from around 1 trillion stars and has taken 2.5 million years to reach us – Mind boggling and amazing all at the same time. We really are pretty small and insignificant!

I did get a couple of photos using the same piggyback method again but didn’t stay out too long as my parents were visiting so sitting out in the garden in the dark on my own didn’t seem very sociable! But here’s how Andromeda was looking on Sunday evening. 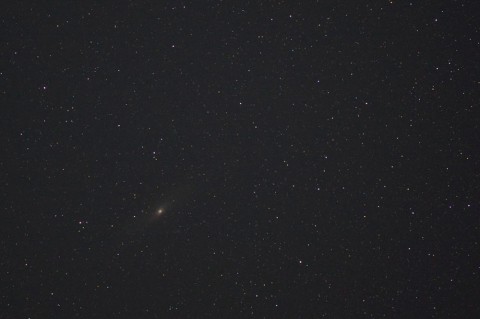