Well, the meeting of ‘The Beast from the East’ and Storm Emma were certainly a potent combination. Along with some input from out local katabatic wind Ivor, it led to some new weather records recorded by the Borth & Ynyslas Weather Station here.

First to fall was the ‘Feels Like’ temperature which hit a low of minus 16.9ºC on March 1st. This beat the previous low of minus 15.9ºC recorded in the big freeze of 2010. The feels like temperature is a complicated calculation that takes into consideration the air temperature, wind speed, relative humidity and the way in which heat is lost from an appropriately dressed human body. Minus 16.9ºC is cold in anyones books!

Then, as storm Emma intensified, air temperatures remained low. This led to a strong katabatic airflow down the valley allowing Ivor to blow his socks off too. Gusts were hitting 85 knots on Thursday night, an all time high. More notable really was the fact that the sustained wind speed was up around 70 knots. Usually it’s just one or two big gusts to hit those sorts of numbers but we were getting 10 minute average wind speeds of close to 80 knots at times. It was absolute madness out there. It was snowing heavily the whole time too, but the wind was just blowing it all away.

We then hit a new record wind speed of 89.5 knots overnight. That’s 103mph, breaking the 100mph mark for the first time.

Here’s how today’s current weather looks from the weather station. 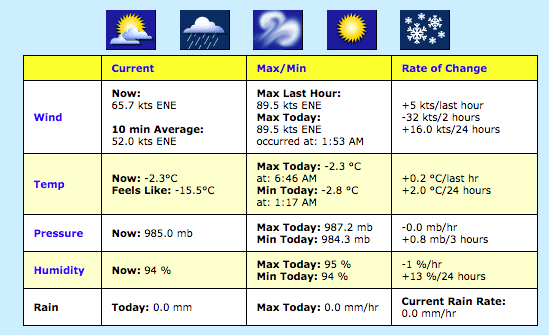 As you can see, it’s still blowin’ a hoolie and freezing cold out there. It’s always exciting to beat some weather records!