The sun was shining, Morgan was off school and I’d promised him we would get the canoe out and go to the beach. So, after a meeting in the morning that is exactly what we did.

Slip, Slap Slop and we were ready to do battle with the sun and the waves. Our inflatable canoe that we bought several years ago from Lidl is perfect for us. Morgan and I fit in it comfortably and it is relatively easy to transport to the beach aboard my trusty wheel-barrow. We only manage to get out a few times a year but it’s always fun when we do. We could do with some new paddles mind you as ours are pretty old, the blades are delaminated and the shaft tends to leave fibre-glass fibres in your hands. Morgan could do with a new life-jacket too as his a little tight so it was a toss-up between the risk of drowning and the ability to breath. We decided that breathing wasn’t so important so he wore it and just had to put up with being a little uncomfortable.

I pumped the canoe up on the beach and we set off with a rucksack packed with food. We headed North along the beach watching diving seabirds as we went and charting our progress both by landmarks on the beach and with my Garmin Forerunner 910XT GPS watch which told us we were making steady progress into the wind at about 2.4mph.

We rounded the point where we could see that the beach at Aberdovey was packed with people enjoying the summer sunshine in Wales. Once in the mouth of the estuary we stopped for a while and allowed ourselves to drift whilst eating lunch. The wind and current were pushing us in towards the point so I had to re-adjust our position a couple of times but we didn’t drift too far. 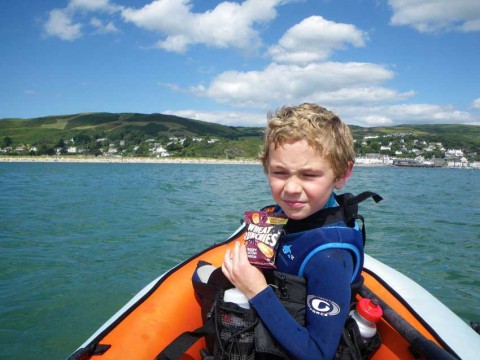 After lunch we set off across the choppy water of the main channel and then across to the clear green, calm waters of Aberdovey. Once on the Aberdovey side we investigated a few bouys and beacons as Morgan wanted to see them. We then saw a young boy swimming out to try to catch a beachball that had been taken by the wind. It was blowing offshore and there was no way he was going to catch it so we sprung into action, rescued it and took it back to shore for him… Good deed for the day done.

We then headed over to the jetty and paddled underneath the wooden piers where people were, as always, crabbing. We should have taken our crabbing equipment with us really but I hadn’t thought we’d make it quite this far. We then explored the coves of Aberdovey a little before heading back across the estuary, weaving our way between the boats moored in the main channel. They were still facing out to sea so the tide was still coming in which meant I’d be paddling against the tide in order to get out of the estuary. It was only a neap tide though and should be now close to high-water so the flow would only be slow.

Next was the long slog back along the point, navigating our way through forests of seaweed and then along the beach and back to Ynyslas. I don’t paddle much so by now it was getting hard work, but I kept going and we were soon back having covered 5 miles with an average speed (including stops) of around 2.4mph. Not a bad day out and we both enjoyed ourselves.

Morgan then played in the sand whilst I chilled in the sunshine and packed up the canoe. Don’t you just love the summer. Here’s the route we took.