It doesn’t seem that long since we had to say goodbye to Robbie – a long standing and much loved member of the family. We really miss her so it didn’t take long to start putting a plan in place for a replacement. Now Robbie was always a bit of a weird cat, with a feral background she never really liked people much and certainly wouldn’t have anything to do with Morgan. What we wanted was a nice friendly cat that would like lots of cuddles.

As ever things don’t usually go to plan. We’d looked around and then a colleague at work mentioned that she had some kittens – quite old at 8 months and they lived on a farm with little contact except for feeding. She sent some pictures and before long a plan was hatched to provide a loving home where they would be loved, well fed and looked after.

The warning signs should have been there when the discussion turned to how we could catch the kittens to move them to our house. Alarm bells should have rung when Alan phoned to say he had been bitten within an hour of their arrival. We should have put out an SOS call when Alan was put on antibiotics within 24hours for an infected finger due to the cat bite.

However, instead we have gone down the long path of patiently coaxing and doing our best to help the kittens settle in. 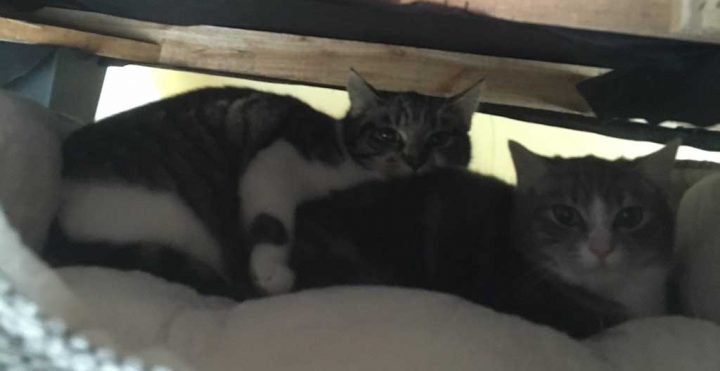 They were soon named Luna and Cosmo although we were still unsure if they were boys or girls or one of each. This led to the next dilemma. What we REALLY didn’t want was a houseful of kittens so we had to get a move on and sort out a visit to the vet. The pair were soon booked in for their first visit to be neutered. We really hadn’t made much progress by this stage and spent most of our time figuring out where the latest hiding spot was. It turns out their favourite place was inside the sofa in the conservatory (inside the lining) so the only way to get to them was to chop the lining off. They were coming out at night to eat but we really saw very little of them. Once we got them out of the sofa lining it became clear we had a feisty pair of cats on our hands. Cosmo wasn’t too bad and I could at least pick her up but Luna wasn’t going to come quietly and I was glad we had some leather gloves to prevent to worst of the biting and scratching.  he vet wasn’t too impressed either when we turned up with 2 vicious cats but they were soon neutered, microchipped and back home, and not ready to forgive us for any of it. We did at least find out that we have 2 girls who are both healthy.

Slowly, slowly we have continued to make progress.  We started to use a Feliway diffuser and Cosmo started to come out more and really likes sitting on the pot plants in the conservatory. 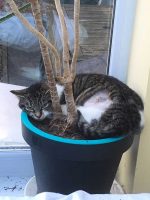 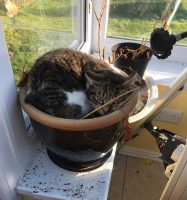 She would tolerate a rub of the head occasionally and then all of a sudden turned a corner.  She will now take food from my hand and is waiting for a head rub and a play before bed. 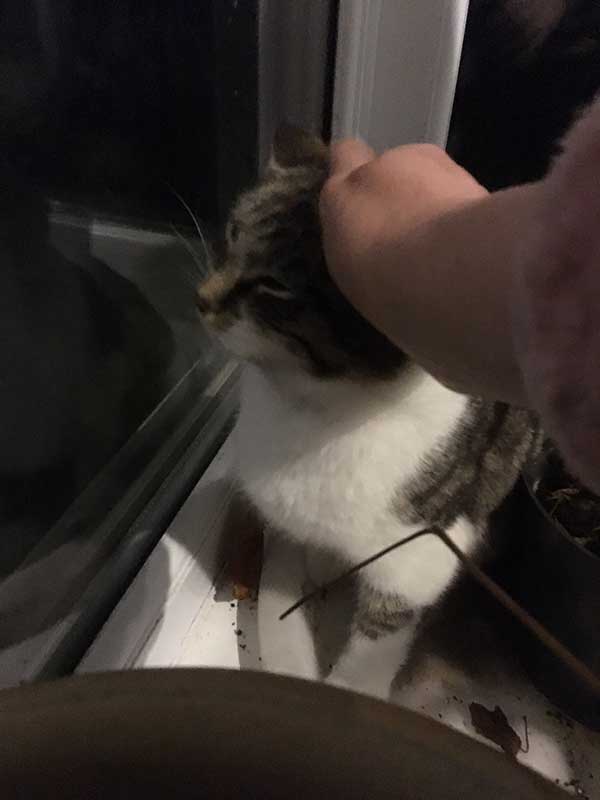 Luna is getting braver too.  She has taken up residence under Morgan’s bed and is still quite feisty if you try to get close. I use a feliway spray on a cloth under the bed rather than a diffuser. She does enjoy a treat although I have to throw it in her general direction but she comes out a night and her and Cosmo like to play and charge around the house once we have gone to bed.

I’m sure it will only be a matter of time before they are much more settled. Before long it will be warm enough to leave the doors open so they can head outside. I do wonder if Luna will decide to be an outside cat but we will just have to wait and see.