Sadly we had to say a final farewell to Robbie on Friday. 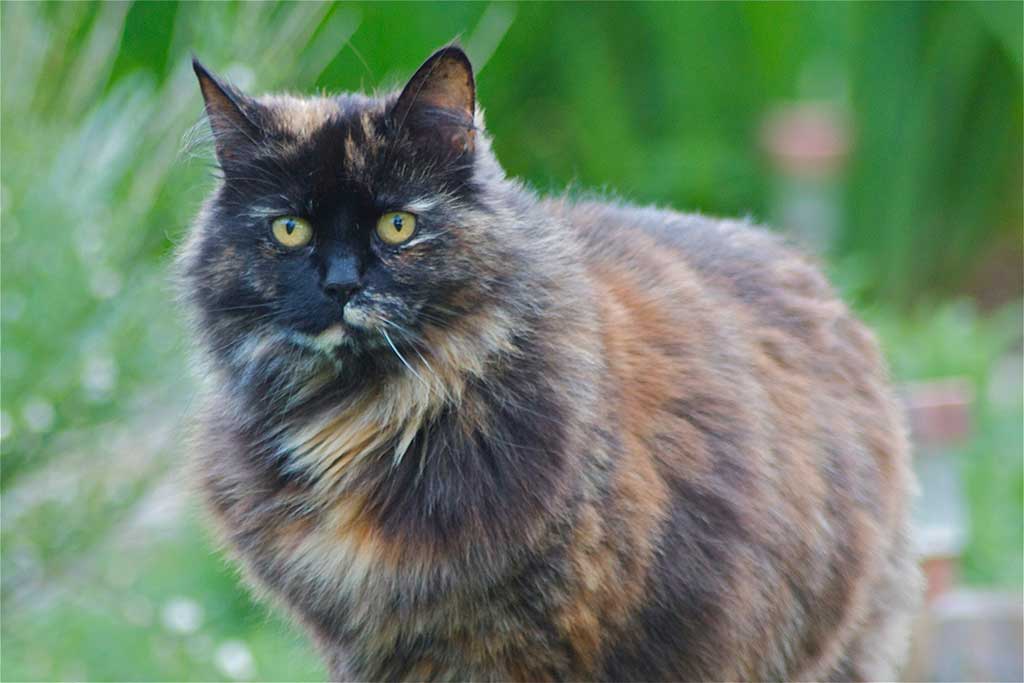 Robbie was our crazy cat that we have shared a life with for the best part of 17 years. She (yes, despite the name she was a girl) came into our lives almost 17 years ago when Anna received a phone-call to say that there was a cat locked in the band-room in Aberystwyth. As a member of the Silver Band, Anna had the keys to the band-room so we headed into Aberystwyth to let the cat out.

When we arrived there we discovered a tiny (probably about 6 week old) half-starved little kitten. Obviously we couldn’t just let it out with nowhere to go so we set about catching it so that we could try to either find it’s owner or re-home it. Steve happened to be with us that evening and was soon ripped to pieces and covered in blood after trying to catch the kitten. It was certainly a vicious little thing and probably a feral cat that had managed to get locked in the room. We managed to catch it in the end, although I ended up a little bloodied in the process too.

Back at our house we kept it in a lidded box, fed and watered it and tried to find it a home. We didn’t find any previous owner – we think it was probably feral anyway, and the RSPCA and Cats protection League couldn’t help either. Although, to be honest I think they secretly knew that we would keep the kitten and look after it so they probably didn’t try too hard. By now the vicious little ball of fur was still in a box and still likely to rip your arm off whenever you tried to feed it but we were becoming a little attached to it.

With no alternatives we decided to keep it and try to tame and house-train it. We’d already called it Robbie so there was no turning back really. We discovered that Robbie was in fact a she on her first visit to the vets for vaccinations etc but the name stuck. We did however live in a student house at the time where pets weren’t really allowed. The house was on a main and very fast road so we didn’t want to let her out as she would probably have been squashed by a passing truck within no time. She was therefore kept as a reluctant indoor cat for a couple of years. Reluctant on her part, not ours.

She never warmed to people though and only really tolerated Anna and I, she quite liked Steve as well but was never what you wouldc all a friendly cat. She did start to settle down, but reverted back to being a neurotic scaredy cat one day when a huge storm ripped through the house and blew a barn into the main road I mentioned earlier. the road was closed, fire-engines came out with blue lights flashing to secure the area and we offered some of the fire-crews a cuppa. As they stomped into the house with their big boots Robbie decided that enough was enough and ran off to hide for several hours. Ever since that day when anyone approached the house she was the same. Even before they came in she would be off and hiding. She would count people (and their cars) into and back out of the house and wouldn’t come out of hiding until she was sure they were gone.

The next stage in her life was when we started building our house in Ynyslas. We were now on a much quieter road and living temporarily in a caravan while the house was built. It was a much safer environment for Robbie and there was no way we could squeeze into a little caravan with her 24/7 anyway so we let her out.

She loved the outdoors and has pretty much been an outdoor cat most of her life since then. She did drive us nuts whilst in the caravan though either meowing loudly outside the door to our room or from outside the caravan itself. She didn’t really like the caravan life and kept us awake most nights, but it was only for a couple of months as we were then able to move into our newly built house.

Robbie moved in with us but continued to spend most of her time outdoors. She did generally come in at night and would sleep on the bottom of the bed, but would stay out some nights too. We did have to let her in and out when she wanted to go either way though as she never quite got the hang of a cat-flap. She could be quite insistent and certainly made her wants well known to us. 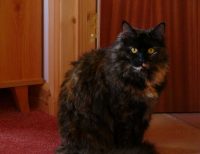 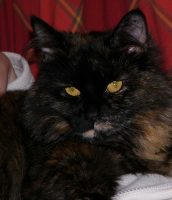 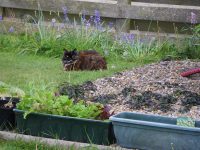 She did have to take a bit of knock-down when Morgan was born though. Not only was she no longer number one but she was kicked out of our room and kept out of his when he was young. She wasn’t best pleased with this and if anything became even more of an outdoor cat. By now she was quite friendly with Anna and I and would sit on our laps, but she still hadn’t warmed to other people and wouldn’t let anyone else anywhere near here. Steve was allowed to stroke her head but that was about it. Eventually she let Anna’s Mum and My Mum stroke her too and as she aged occasionally would pretend that she didn’t realise it was Morgan stroking her at times. She secretly liked it but wouldn’t admit it!

She never really warmed to other cats either. There were two cats around for a while, a ginger cat that we imaginatively called ‘Ginger’ and an ugly looking cat that with equal imagination we called ‘Ugly’. Robbie put up with them but only because I don’t think she had any choice. She certainly didn’t like them and they didn’t share food.  They disappeared from the neighbourhood after a while.

Next on the scene just over a year ago was a little ginger Tom cat that I named Parkin – Much more imaginative by now! Robbie was by now quite an old cat and quite a grumpy one too. Parkin was quite small and despite being a male was put in his place by the grumpy old lady Robbie. They did seem to get on fairly well after this with Robbie as boss and Parkin just going along with whatever she dictated. Parkin hasn’t let us get close to him yet but we do feed him and he does come into the house when he thinks we aren’t looking! 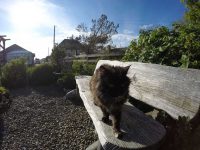 As I said, Robbie was now very old and had a couple of times been on what we thought were her last legs. She had recovered each time but now spent lots more time sleeping, was quite stiff and getting deaf. She’s actually been almost completely deaf for a while now and if anything this was a blessing in disguise. Her deafness meant that she couldn’t hear people coming and she therefore became much more chilled. There was no more mad panic when a car pulled up onto the drive, no more flailing about trying to get behind the sofa when the doorbell rang. Once she got the hang of this she was much more relaxed. Parkin even taught her how to use the cat flap (but only if we removed the flap) so she could come and go as she pleased. Old age was catching up with her though and now she tended to come more often than go and spent most of her time curled up asleep.

Things came to a head last weekend when she suddenly went completely blind. She was fine when I saw her on the windowsill at 7am, but by 9am she couldn’t see a thing and was bumbling around the house bumping into things. After a trip to the vets there was nothing they could find that had caused it, although they did comment on her irregular heart-beat, mentioned the possible presence of a lump in her stomach and hinted at the fact that she didn’t have long left. We of course knew this already.

We left her for a few days and she was managing to find her way around the conservatory but we couldn’t let her out and we couldn’t leave her in the house unless we were with her as she was unable to find her way back to her food, water or litter tray. It didn’t seem fair to keep her locked up in the conservatory. With what was presumably little quality of life left now that she was completely deaf and blind we had to start making the decision about putting her to sleep. Robbie didn’t make this easy for us – she’s never been an ‘easy’ cat. In many ways it would have been nice if she just passed away in her sleep one night as that would have meant we didn’t have to make the decision. Instead, she kept going and would even appear quite content asleep on Anna’s lap in the evening. She was still eating and drinking too and purred when given treats so it wasn’t all bad. The conservatory would be getting cold soon though, and she was locked out there much of the time. She wasn’t always managing to find her litter tray and with no vision would often stand in her poo when scraping at her tray. This then got trodden around the room a little and she wasn’t great at cleaning herself anymore either. She was therefore now quite smelly as well as deaf and blind. She wasn’t quite as grumpy as she used to be which was a bonus but it didn’t look like she was having much fun and she looked quite sad whilst inching her way around the house trying not to bump into things.

We decided in the end that it would be best for her and for us to have her put to sleep before things got any worse. It’s never a nice decision to make but it was the right one and hopefully now that’s it’s done it will be something of a relief for all involved.

Robbie was certainly one crazy cat. She’ll be missed of course, but thanks to us she had a good life and did surprisingly well for one so highly strung!