It was Morgans birthday at the weekend. Quite how he got to be 13 already I’ll never know. It was also half term last week so Anna and I took Friday off so that we could have a long weekend away. We therefore headed off after work on Thursday to my parents house just North of Bristol. We had booked a ‘room escape’ activity for Morgan on the Saturday and had the rest of the weekend to amuse ourselves.

I went for an early morning swim on Friday while the others had a slow, lazy start to the day. The three of us then headed into Bristol on a glorious but cold sunny day. We visited M Shed which is a museum of Bristol life. I’m not sure I like museums like this – I tend to associate museums with things from days gone past. Trouble with this one is many of the exhibits are just the way I remember Bristol anyway! Maybe I’m getting old. We had coffee and cake and a full blown ham and cheese toastie for Morgan in the cafÃ© and took a look at the Banksy ‘Grim Reaper’ that they have before leaving. 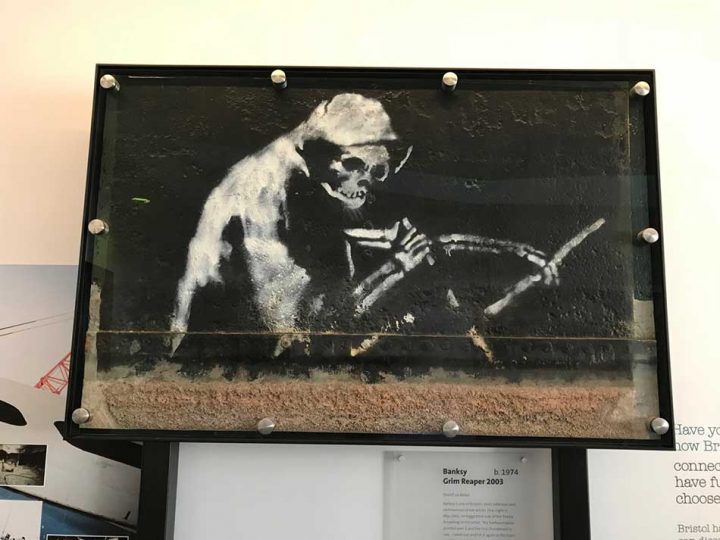 This used to be on the side of the Thekla, an alternative floating nightclub that I used to go to many years ago.

We then wandered around the docks and over what to me is a new bridge and into the new harbourside area. Again, I think I’m showing my age here as this isn’t new to most people in Bristol anymore. I remember it well when there was nothing at all here, just a few dilapidated warehouses. Now it’s a modern development filled with restaurants, bars, shops and hotels. 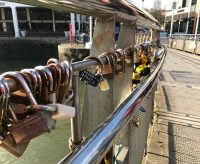 We headed up past my old school and into a little street where we saw another Banksy called Castles in the Sky – this time a real life one in its natural habitat! 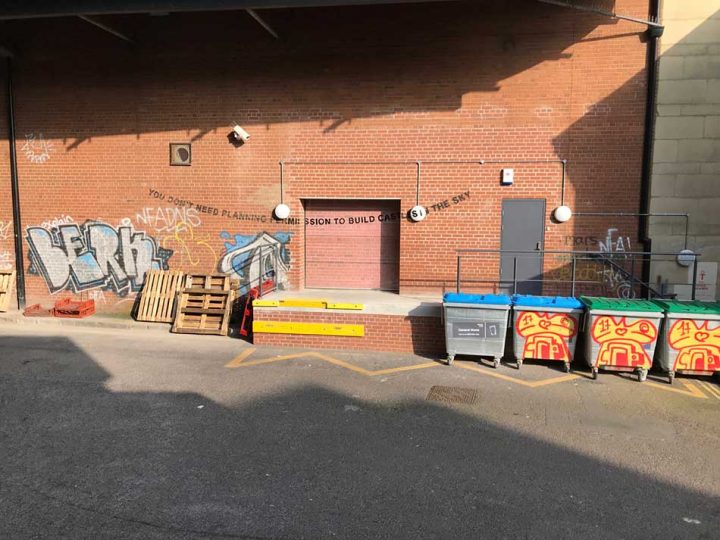 Castles in the Sky

We then headed into the Cathedral – somewhere I spent quite a bit of my time whilst at school so I was able to show Morgan around, show him some little secrets and show him my old school classrooms. Thankfully not much had changed in here!

After a stroll across college green we took a look at one of the more famous Banksy artworks, ‘Well Hung Lover’ and then walked up Park Street to the museum. 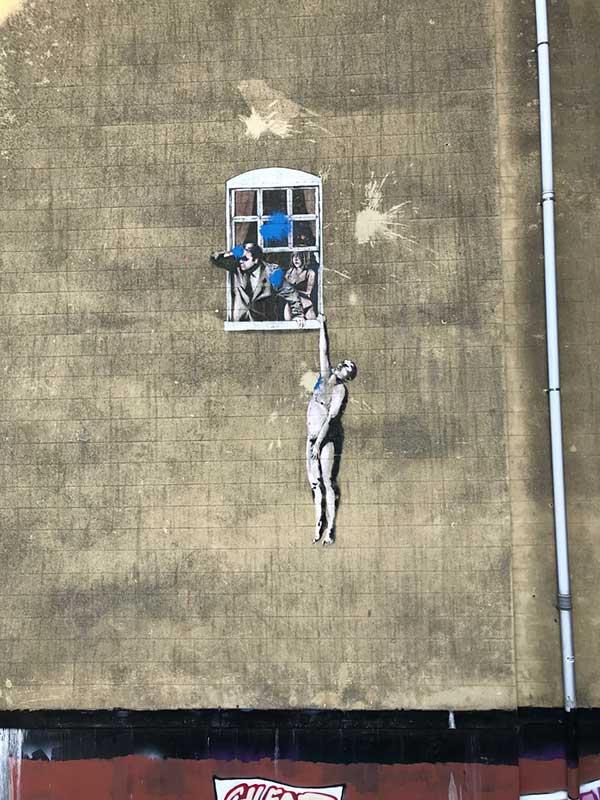 Almost every shop on Park Street has changed since I was there. We didn’t look around the museum though, just took a look at the Banksy ‘Paint Pot Angel’ that is in the main entrance hall. 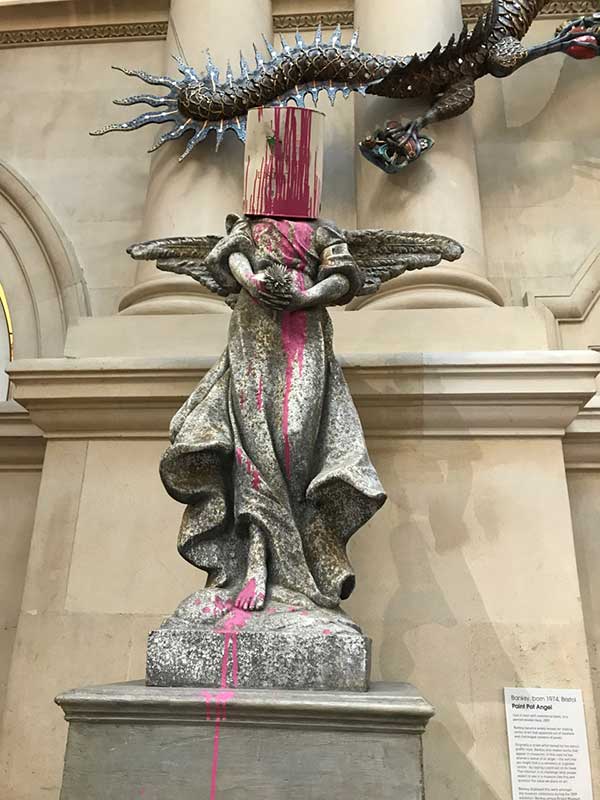 We then spotted what looked like another one on a building in Park Row. I’m assuming it’s a Banksy but it could be a replica done in his style. 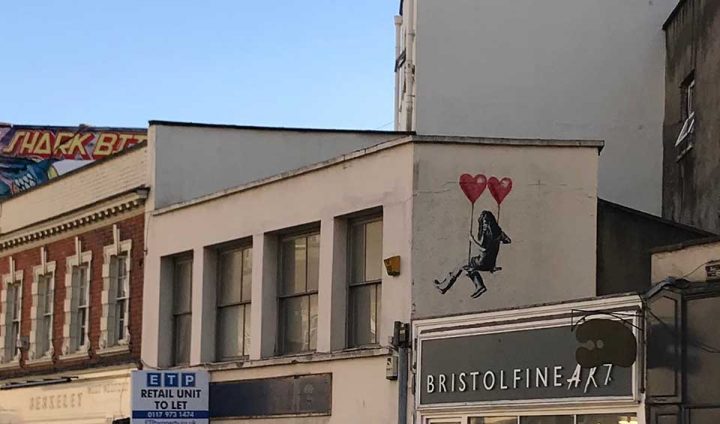 Girl on a Swing

We then heaed back to the car and off to look at bathroom suites to get some ideas for our bathroom before heading back to my parents house for dinner.

Saturday was another early start for me with a short but sharp run session comprised of several hill reps.

We then headed into South Bristol, not far from where I used to live for a ‘Room Escape’ activity at City Mazes. Essentially we got locked in a room and had to solve various clues and puzzles in order to get out. We met my brother Jay there along with Morgan’s cousins who were joining us for the ‘experience’. After a brief safety talk we were given a walkie talkie that we could use should we need any clues and were locked into the room.
I won’t give too much away but we managed to get out with 5 minutes to spare. The puzzles involved combination locks, various colours, clocks, magnets, mazes, ropes, lights and a few other things too. All good fun. Some were a little more difficult than others and we did have to ask for help a couple times. Although each time we did it turned out that it was only to avoid red herrings. 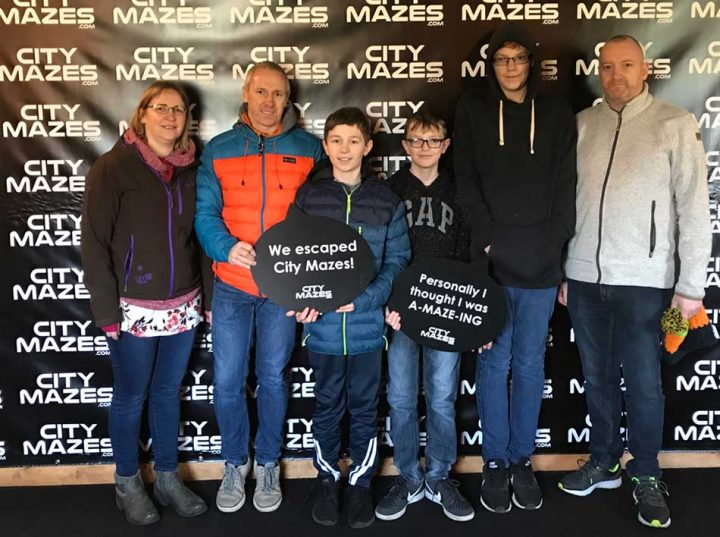 Once we were out we headed off to Cribbs where we were meeting everyone else for a birthday lunch at Frankie & Benny’s. We had a bit of time to have a quick browse in some of the shops in The Mall first. Lunch with 14 of us was the usual manic affair but Morgan enjoyed some time with his cousins, enjoyed his pizza and even had Happy Birthday sang to him along with his cake! 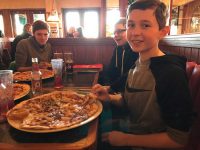 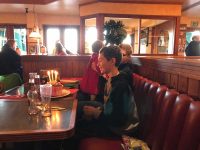 Afterwards Anna and I took a look at some more very nice bathrooms while Morgan headed back to my parents house. We met him there later for dinner and a chilled evening.
Sunday was a birthday breakfast of pancakes for Morgan and a nice drive home through a cold but very sunny Wales.