New Addition to the Household

You may remember that Morgan’s pet guinea pig Squeak died a few months ago. Morgan was heart broken at the time and it also left us with a dilemma. Morgan had another guinea pig called Bo. I was concerned that Bo would get lonely on her own. She is only about 3 years old and as guinea pigs can live to around 7 years old she should still have a good few years in her. We asked around for advice and did some research on the internet about getting a new friend for Bo.

Pets at Home, where we got the original pigs from, said not to introduce a new one, they would never get on. Info from Guinea pig owners online seemed to suggest otherwise, as long as introductions were gradual and the right mix put together.

Bo lives in the house so does get a lot of daily contact from us as we go about things but this can’t be the same as living with another guinea pig. One website said “imagine you are kept in a cage by a big giant that doesn’t speak you language with no other humans. No matter how nice the giant is to you, you would still prefer to have another human living with you, even if in a cage next to yours.” This made up my mind, we’d have to get another guinea pig although I didn’t want to end up with 2 pigs living in different cages. Now I just had to find a guinea pig looking for a home and convince Alan it was a good idea.

The plan all fell into place after talking to Christine who used to run Borth scouts. She has loads of guinea pigs and seemed to think introducing a slightly younger pig to Bo would work well. She had some we could choose from and if the first didn’t get on we could try another until we found a good match.

We popped round just before Christmas as a surprise for Morgan and picked a lovely little chocolate brown guinea pig which Morgan quickly named Flash.

Now for the introductions. The plan was to take it nice and slow and see how the guinea pigs got on. First we put them together on the floor and just let them find each other. Flash was quite timid and Bo just gave her a good sniff and lick all over and then sat down and had a wash her self. Looking good so far. Given this was going well we decided to take it to the next step. We put them both in a big box, neutral territory, together with a couple of hiding places and sat by to watch what happened. Pretty soon they were both snuggled up together in one tunnel. This sealed the deal and they were soon back in Bo’s freshly cleaned out cage and I sat by watching for any trouble. We made sure there were lots of hiding places but Flash quickly ran into Bo’s bed. If there was going to be trouble now was the time…..Nope, nothing. Bo walked over with a bit of cabbage in her mouth and let Flash take it from her leaving Bo to go and get some more.

I think Bo thinks Flash is her baby. She is certainly very protective of her and doesn’t mind when Flash takes her food at all but doesn’t like it if we take Flash out for a cuddle. Flash is still quite timid but we are just giving her time to settle in and I’m sure she’ll be fine.

Obviously Bo was lonely and I’m glad we found a friend for her. We wouldn’t have done it without Christine’s help as it was important to find the right friend and maybe we were just lucky it worked first time. 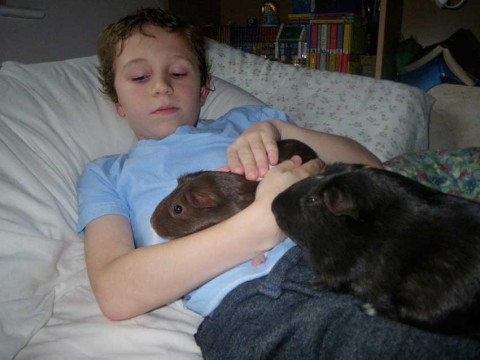