I haven’t mentioned my aquarium or the aquascape within it for quite a while. It was all looking really good lately though and the plants, fish and shrimp inhabitants were all doing well. That was until I noticed the bracing piece of glass in the middle of the tank had fallen off! Actually, one end had fallen off and it was hanging down inside the tank. 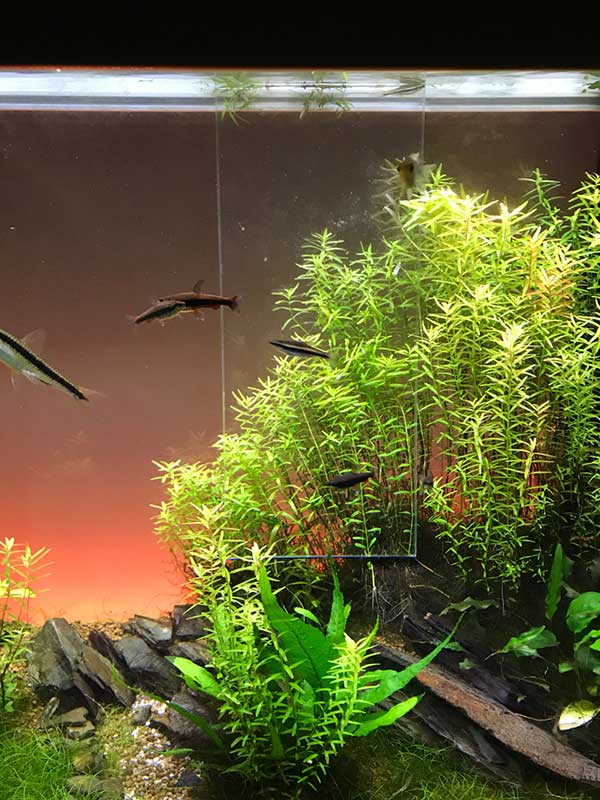 This was obviously a little worrying as usually this piece of glass is there to stop the glass at the front and back of the tank from bowing and potentially cracking.

However, closer investigation revealed that this bracing piece of glass was only ever siliconed directly to the front and back of the tank. Usually there are a series of horizontal braces running around the periphery of the top of the tank and the centre brace attaches to these so that it has a nice strong attachment point and the whole thing is anchored into a strong bracing system. This was only attached with silicone and had nothing to brace itself against. It would never stop the tank from bowing like this as the strength of a small bead of silicone at either end would never be enough to counteract the forces of a bowing tank.

I contacted the manufacturers and they told me to just clean it and reattach it with silicone. I’ve tried this using some special underwater bonding sealant rather than silicone but with limited success. There’s actually quite a big (at least 5mm) gap between the tank itself and the bracing sheet. This reduced a little when I drained the tank but as soon as I fill the tank this gap increases and the bond breaks. It failed first time so I’ve tried again, this time with more water in the tank so that I could fill the gap with the sealant too. I don’t hold out much hope though. It was sat there for a while with the sealant drying and a piece of garden cane holding everything in place.

The fact that there is a gap means that the tank is bowing somewhat but I don’t really see how attaching a bracing strip directly to the front and back of the tank will prevent that. The weak spot is always going to be the sealant holding that together and it is always going to pull apart. I’m sure simply filling the gap with sealant as I have done isn’t doing any good at all though. The sealant itself also looks a bit of a mess now as I’ve had to use it to fill gaps as well as bond the glass and have done it a couple of times. Thankfully all of this is hidden by the hood though.

Talking of the hood, I think it’s actually an aluminium frame that fits around the top of the tank. It’s about 3 inches deep and has some internal ribbing to it.  Hopefully this gives the top of the tank some structural integrity as well. Lets hope so.

I have told the manufacturers what happened and have asked just how essential the bracing sheet is. As far as I can tell it couldn’t have been doing much. However the fact that the gap between it and the tank increases when I fill the tank with water also proves that the tank is bowing a fair amount without it. The tank itself is constructed of fairly chunky 8mm glass so hopefully it’ll be OK without it. I don’t fancy having to start all over again with a new tank. Especially seeing as it had been looking so good. 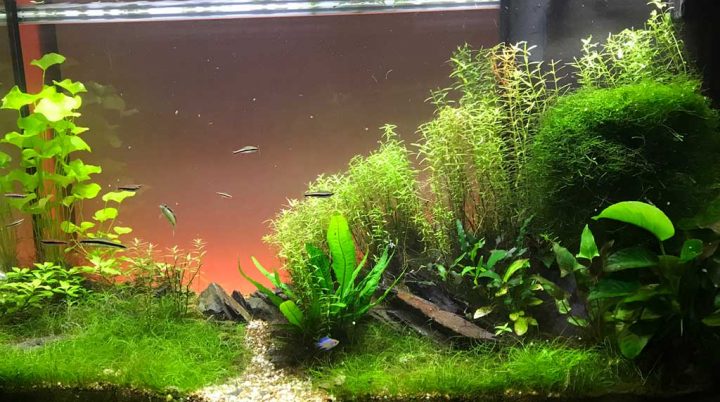 I did however get a panicky message back from the manufacturers saying:

Important: removing the bracing piece altogether will compromise the structural integrity and security of your aquarium and put you in danger.

As this first attempt was not successful as expected, we kindly suggest to proceed in the same way (removing all traces of silicon and cleaning very well with alcohol) however, instead of draining 1/3 of the water tank, make it 50%, in order to reduce the water pressure on the tank walls and therefore, allowing the glass structure going back to its normal state (minimizing the 5mm gap). Afterwards, silicon the glass piece and secure it in place, as previously, and double the drying time without any kind of covers or flaps (avoiding any kind of humidity).

I guess I’ll have to try again, starting from scratch and draining even more water out. Maybe waiting longer before re-filling the tank will be the solution, giving the sealant time to set so that it’ll all hold together when I refill the tank. Quite when I’ll have time to do this now I don’t know so I hope the current botched repair holds up for now. It’ll also mean turning the filters and heaters off in the tank for a week while the sealant sets fully. I don’t think this will do the inhabitants much good. But then again, if the front of the tank gives way that’ll do them even less good.