Monday’s Offa’s Dyke run looked like a fairly straightforward one. It was short at only 14 miles, had 3 big hills and best of all easy bus links between the two places. Although, after checking the bus timetables I wasn’t really sure what time the bus would leave Kington. It was either 7:50 if it was a school day or 8:26 if it were a Saturday or a school holiday. It definitely wasn’t a Saturday, but it was Half Term here in Wales. Knighton is of course in Wales, but the Offa’s Dyke path does of course cross into England and Kington is in Herefordshire. I therefore checked the Herefordshire County website and sure enough, it was half term there as well. I therefore assumed that the bus would leave at 8:26. However, being me I decided to leave at 6am so that I could get to Kington in time for the 7:50am bus just in case! It would mean a bit of a wait but I thought it would be better to have a 40 minute wait for that first bus rather than wait for the next bus which wasn’t until 10:10.

The drive through Wales was dark and very misty. It was therefore very slow too and I got to Kington just before 7:50 deadline. I wasn’t too worried though as I knew the bus wasn’t really coming until 8:26. Most notable about the drive, other than the mist, was the fact that this was the first time since starting my circumnavigation of Wales that I was heading south from our house. In the past I’d driven out to Tre-Ddol and headed north or East. Today I left via borth and headed south. I must be making progress!

It was a good job I was there on time for the school-day bus. It was also good as it meant I was getting an earlier start than I had anticipated. I was the only person on the bus as there weren’t any school kids about. That’s the way it stayed without a single stop all the way to Knighton where I got off and finally a single school-girl got on the bus.

I made my way to the Offa’s Dyke Centre and started my run for the day. First through the quiet streets of Knighton and then up through a little housing estate and onto a steep muddy climb. This took me through a little woodland where Great Tits where screaming ‘Tee-cher, Tee-cher’ as I ran past and woodpeckers could be heard drumming away in the trees overhead. The path took me alongside the Golf Course and then eased off in gradient as I crossed several muddy fields. Although muddy, this was slippery, claggy mud rather than the deep, wet mud I’d become familiar with over the past few weeks. Clouds hung low over the hills, the sky was grey and the world was a little damp. It wasn’t actually raining though and I was feeling good.

The Dyke itself made an appearance over the top of the hill too, as a low embankment to my right topped with leafless trees.

The path took me through numerous gates and along the boundaries of fields as it skirted around the summit of Ffrid hill. The views out to the west were all a little grey but I imagine they would be nice on a summers day. The path continued through fields as it dropped down from the hill towards the B4357. I followed this for a few hundred yards where it joined the busier B4355 which I had to run along too. There was no real path here and no real verge so I was glad it was still fairly early and the road wasn’t busy.

The path soon took me off the road and started heading up once again towards Hawthorn Hill. Again I was following the ridge of the Dyke, often running along it’s top. 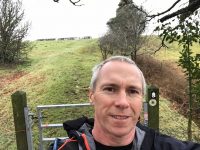 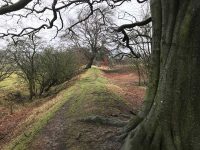 I crossed the B4355 again and into a little wooded plantation. This then took me out through some gorse bushes that were just beginning to flower and onto some rolling green fields where the Price monument stood proudly in the grey light.

From here the path climbed steadily, following the dyke up to the summit of Hawthorn Hill.

It then ran across lush green fields where the running was easy. Views out across the Welsh Hills opened out to the west. 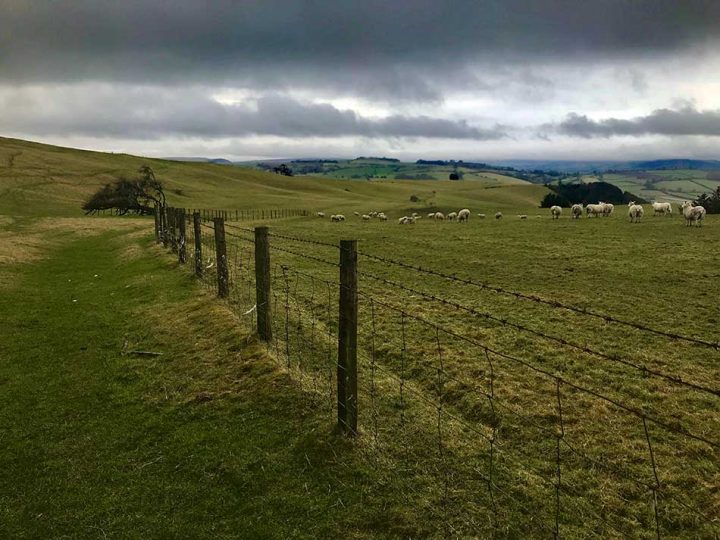 Running across the Hills

True to its name there were old, contorted Hawthorn trees here and there on Hawthorn Hill. 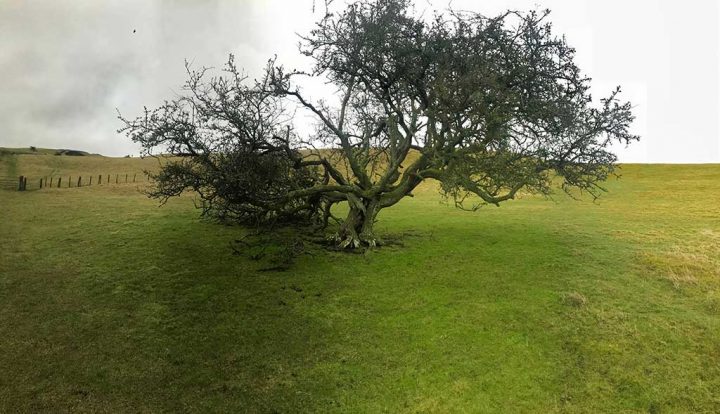 The descent from Hawthorn Hill was fast. I was covering the ground well and making good time. Although, to be honest, part of the pleasure of this type of running is not worrying about time or pace or anyone else. It’s just nice to be out there on my own, following the signs and plodding along at whatever pace suits me. So far today that was a moderately quick pace for this kind of terrain. I hadn’t seen a single person since leaving Knighton and it looked set to stay that way!

The River Lugg and Pen Offa

The trail took me around Furrow Hill and then dropped steeply along a muddy track to the road at Dolley Green. Here I followed the road for a short while before crossing some fields alongside the River Lugg. It was wet underfoot here and the bridge across the river was slippery. The river itself was flowing well with some impressive meanders in it. Just beside the bridge was a particularly intricate meander that has left just a narrow, wiggly strip of grass between it’s twists and turns. 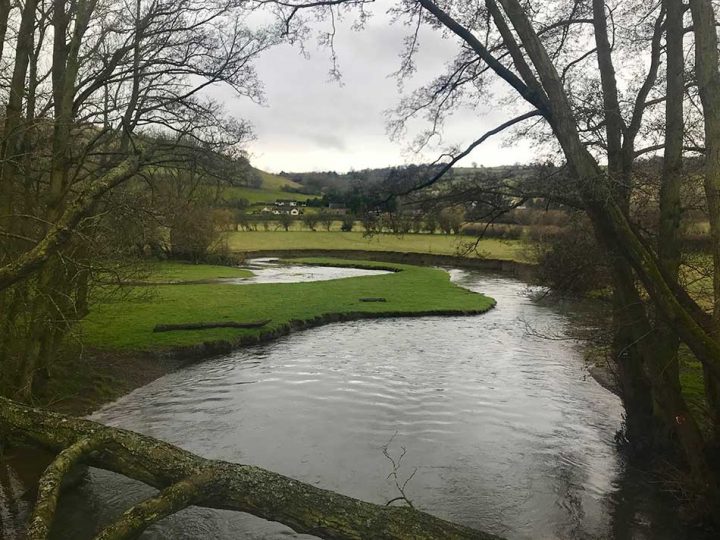 A few more fields and the crossing of a small road then led to a steep climb up towards Pen Offa. It was slower going up this hill through fields, crossing from one side of the dyke to the other, across another small road and finally through a small plantation on top of the hill.

Next I entered the damp paths of Granner Wood. The running through here was nice too, jumping over slippery roots and descending several sets of steps as the trees closed in around me. 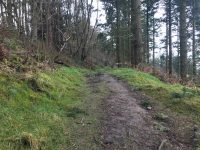 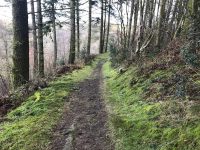 I then dropped gradually down alongside the dyke which is huge here and runs alongside a deep ditch too. The path descending gently so my pace increased once again as the hills of Burfa Bank and Herrock Hill loomed ominously in my path.

I crossed a little track and joined a muddy track that ran alongside the huge and rambling barns and outbuildings of Old Burfa. I spotted a slightly out of place neon ‘Top of the Pops’ sign out of the corner of my eye. I then saw a teenager wielding a pool cue behind the glass fronted facade of what must be a games room. It was pretty much underground, covered with a grassy garden and just the glass front visible from outside. I imagine it to be a pretty cool games room for a teenager. 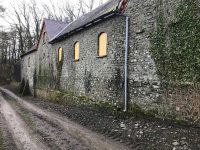 I didn’t take any photos of the Games room though as it was clearly inhabited with teenagers enjoying their half term holidays.

The muddy track took me into the woodland that surrounds Burfa Bank, a massive Iron Age Hillfort. It rounded the hill following the contours and the descended onto a small road at Ditchyard Bridge. Here it joined the B4362 for a while. Luckily the road was quiet today but it was quite a fast road with lots of blind corners and no verge so running along here on a busy day would be quite unpleasant.

Thankfully I left the road behind me at Lower Harpton Farm, ran through the farmyard and then up along a gentle rise onto the northern slopes of Herrock Hill. These gentle slopes soon become much steeper as the path swung around to the right. It then started climbing over muddy tracks up the eastern side of the hill with amazing views of the lush green valley below me.

I was forced to walk in places but eventually emerged out onto the bracken covered Herrock Common. 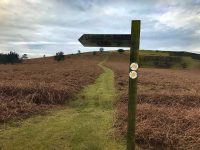 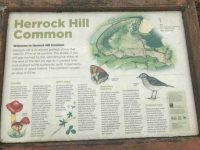 After a few photos I continued on my way, only to stop again to take more photos of the views out to the West. 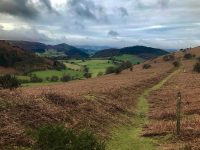 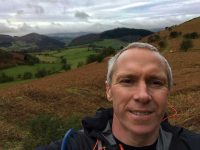 It was still quite a grey day but the clouds were lifting somewhat so that the solid grey murk at least had some definition to it now.

The path descended a little and then rounded Rushock Hill following the low mound of the dyke. Eventually the dyke petered out and I turned right across some large fields, leaving it behind me. I think this may be the last I’ll see of the dyke itself for about 50 miles. 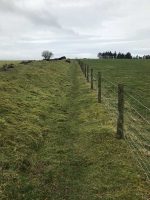 End of the Dyke

I was now on the flanks of Bradnor Hill. This section consisted of crossing a few fields, bypassing a small woodland and skirting around a large house with an old red telephone box in it’s grounds. I then came out onto the greens and fairways of Kington Golf Course where I caught a glimpse of the first people I;d seen all day long. I ran across the fairway and then descending quickly alongside the golf course across a couple of lanes and then down through some small paths to find myself at a crossing of the busy A44. I crossed the road and was in the back-roads of Kington where I discovered that my van was parked on the Offa’s Dyke Path itself.

A relatively short run today so I felt quite fresh as I ate a banana, drank a chocolate milk and started my journey home. Another good day on the dyke and yet more miles ticked off. Just the rest of Offa’s Dyke and the entire southern half of Wales to go!