Next the power company was out in force replacing the overhead cables and updating our electricity supply. We used to get power-cuts all the time and the lights would dim every night at 9pm. Since the updates all has been good.

And now they are in the process of installing mains drains. I won’t go into all of the details of our battles with the water companies over the past 14 years or so but here’s the quick version of the story. When building our house back in 2013 we were told that mains drains would be installed at Ynyslas within the next few years and it was therefore OK to build the house. We therefore spent the next few years without any drains at all. We had a portaloo in the back garden for calls of nature and had to be very frugal with water use, and particularly water waste. Laundry was done at the launderette. Washing up water was used to water the garden and washing and bathing meant siphoning the water out onto the garden afterwards so we tried to shower at sports centres and such like where possible. Eventually after much fighting with Welsh Water we gave up hope and spent around £10,000 on a septic tank so that we could finally use water in the house. Meanwhile the Environment Agency continued to battle with Welsh Water telling them that they had a duty to install mains drains here. Now, 14 years later they are finally doing so. 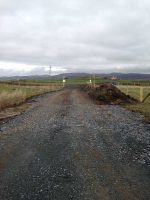 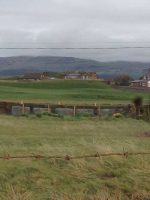 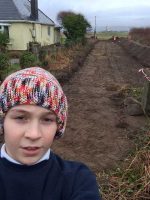 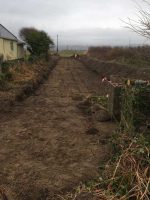 There are also a few houses on the other side of the road so a trench has also been dug that will contain a pipe to connect these house as well. Although this looks more like a canal at high tide at the moment. 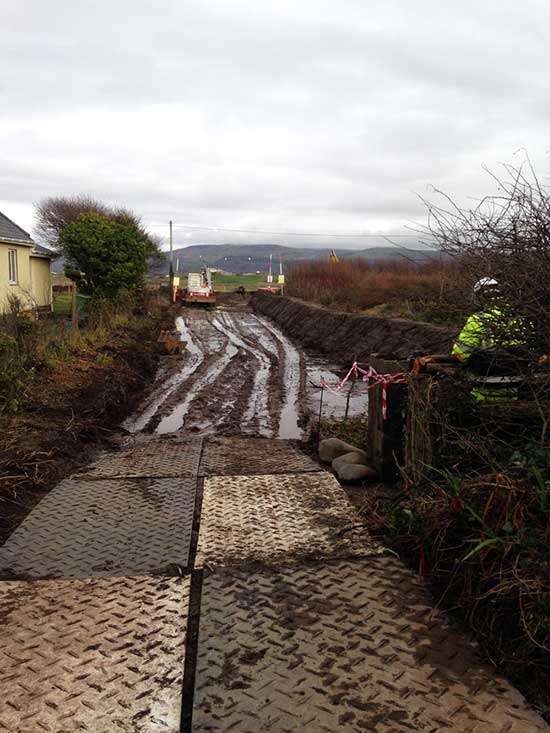 As far as we are aware, the piping will come to each property and stop there. Each home owner can then choose whether or not they connect and the cost of connection will be £500. Now, having spent £10,000 on a septic tank – that seems to be working as it should – we don’t really want to spend more on connecting to mains. Not only will it be more expense when we can’t afford it, but it’ll also mean that we have a very expensive septic tank sat redundant under the back garden. The £500 is only for the connection to the edge of our property as well, we’ll have to fork out ourselves to join that to our drains.

On top of that it will also mean digging up the garden yet again. We’ve already had it dug up several times in the past 14 years. Once to install the septic tank, once while building the conservatory, once for BT to install new cabling and again for a new drive. I’m not sure we want to go through all of that again. Oh, and we dug it up to install the trampoline!

On the other hand, we will want to connect at some point in the future, and we don’t want to miss out now only to find out that the pumping station is at capacity and we can no longer connect sometime down the line. We’ve been assured that this won’t happen, but somehow I’m not convinced that if we leave it for now it will still be easy to connect in the future. Maybe we should just bite the bullet, dig deep into our depleted pockets and enter headlong into the 21st Century at Ynyslas.