We had been planning on building a lean-to along the back of the house for a while but then all of a sudden due to other commitments and arrangements the weekend that we’d be able to do it was upon us. It wasn’t supposed to be quite so soon but it was the only weekend we had free and my parents had free and they wanted to come up anyway to see Morgan in the Junior School Proms. With things suddenly shifted forward a few weeks it meant I had a frantic time measuring up and deciding what material we needed for building a lean-to.

I soon worked it out and had things ordered. The wood, concrete and various fixings soon arrived from Huws Gray and I had scheduled the plastic sheeting for the roof to arrive on Friday when I would be there for the delivery. This meant we could make a start on building the Lean-to on Friday and hopefully get close to finishing it off over the course of the weekend.

Clearing the Site for a Lean-to

My parents arrived on Thursday evening so that we could make a start on Friday morning. I had hoped to clear some of the site beforehand but what with work and other things going on just hadn’t had time. I had dismantled and moved the raised bed and dug out lots of soil. I had also moved all of the bags of compost, buckets and other things that had been stored behind the house. We had also cleared out one shed and moved its contents to a new gardening and beekeeping store. 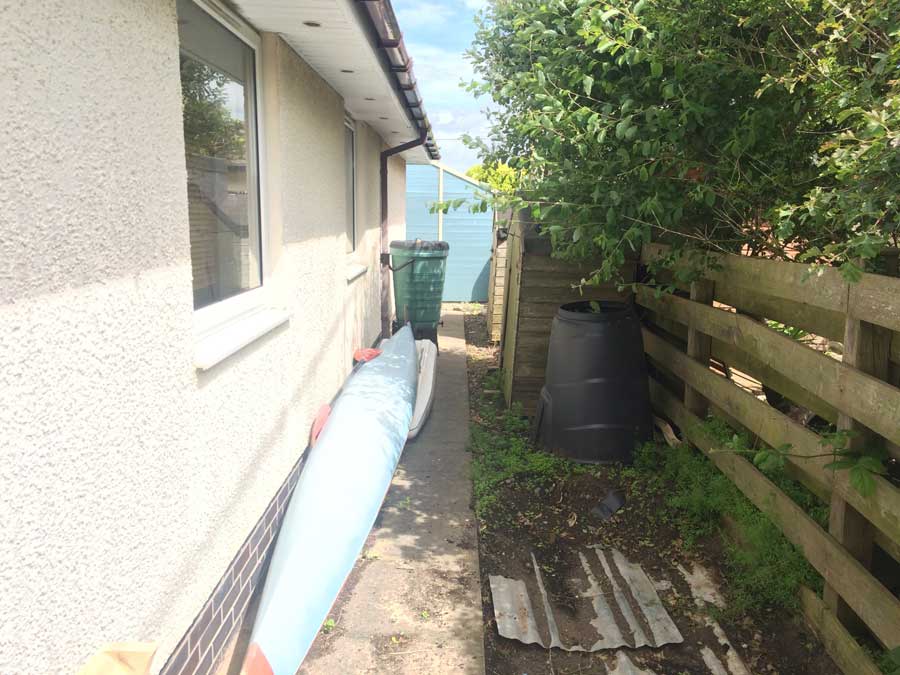 Site of the new lean-to

There was still lots to do though so I was in the process of moving compost from a compost bin that was behind the house when my parents arrived on Thursday and then started again on Friday morning, moving yet more compost, emptying the log stores and moving the canoes. Next we had to dismantle the old fence and trim back some trees. 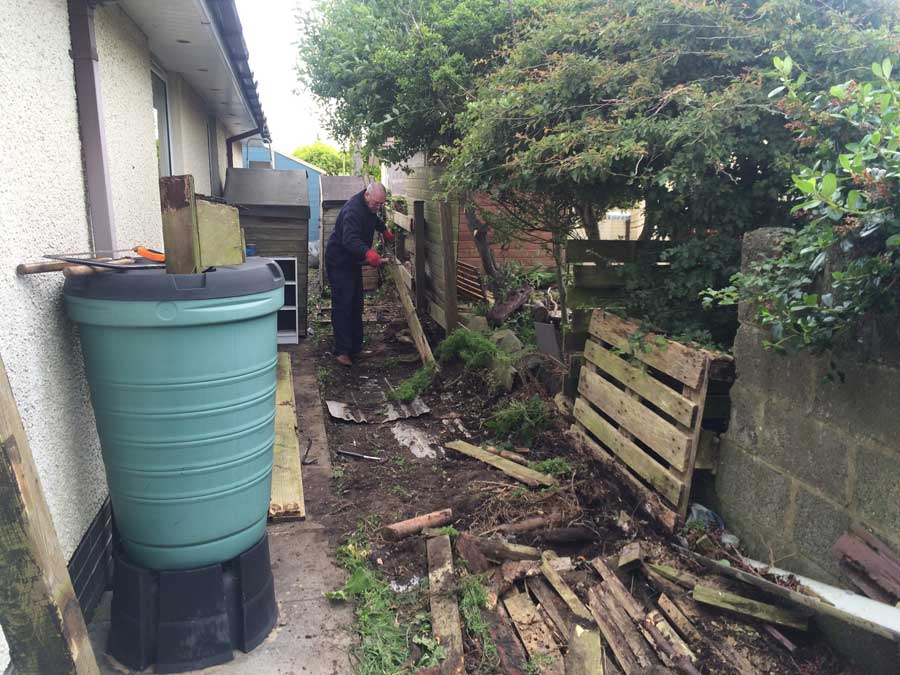 Already the front garden was filling up with various piles of discarded wood and vegetation. 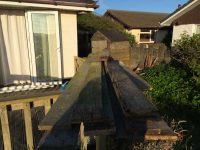 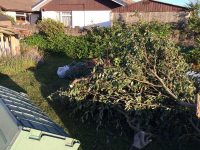 Not to worry, we’d be able to re-use the wood elsewhere and will have to make up a new plan for the removal of garden rubbish.

With the area semi-cleared, or at least clear enough for us to get to where we needed to get we could start work on building a lean-to.

The first job was to put in some new 8ft 4″x4″ fence posts. Digging the holes for these was nice and easy thanks to the fact that we live virtually on the beach and the ‘soil’ here is just beach sand. It would however have been nice to have had the plastic sheeting just so that we could check the size as we needed to know how far to position them from the wall of the house. We didn’t have them though as they were due to arrive sometime today so we hoped they were cut to the size I’d ordered and based the position of the fence posts on those measurements. We also had to make sure that the fence posts were aligned and level a little more accurately than I would do for just a simple post. 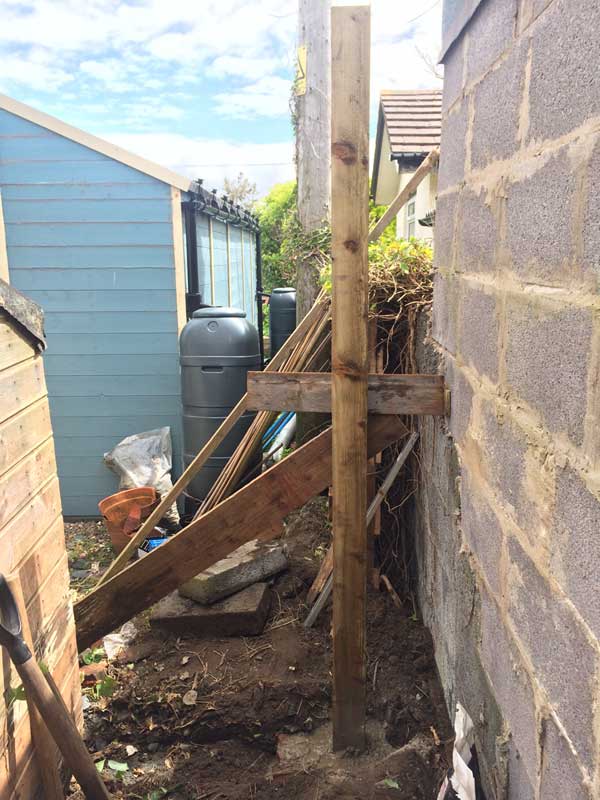 We had a few short stops for tea and cake of course and a little trip to the builders merchants to get more concrete but were making good progress. By 3pm the plastic sheeting still hadn’t arrived though so I gave the company we had ordered it from to make sure it was actually on it’s way. They said it was and that it would be with us by 5:30pm – You know where this is going already don’t you!

By dinner time we had the fence posts in and had started thinking about the next step in the process. The pieces between the posts here were just to help hold them in place so weren’t supposed to be level!

5:30pm came and went but the plastic sheeting and other materials had not been delivered. This was now a problem as it was unlikely we’d get it delivered on Saturday so we now didn’t have the necessary materials for the job despite having paid for delivery on a specific day so that this wouldn’t happen! Not only did it make measuring up and position things a little more difficult as we didn’t know exactly what we had to work with as far as roofing materials went, but my Dad was here for the weekend to help and now we wouldn’t have the materials until after he was gone. Not a good start and very annoying having paid specially for deliver on a specific day and having phoned earlier in the day to check that it would actually arrive. Grrrr….

Anna and Morgan were home from work and school relatively early to inspect progress so far. Anna cooked dinner and then headed off to Scouts while we tidied up outside and recovered from a day of building a lean-to.

We couldn’t start too early on Saturday morning though as the next stage involved lots of noisy drilling and sawing, so I headed off early for a Half Marathon run. Once back and showered we headed back out into what was a cold, windy day to continue work on building a lean-to. Next on the lost of things to do was to install purlins along the house and along the tops of the posts. This meant drilling holes into the house so as to anchor them to the wall and then we had to cut the posts down to size so that the purlins would rest on them and be level. We did of course have to work out what the slope of the roof would be beforehand and once again without the actual plastic sheeting this wasn’t as easy as it could have been. We got there in the end though and soon had purlins along the wall of the house, complete with cut outs to allow the windows to open. 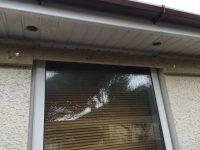 And purlins attached to the top of our fence posts. 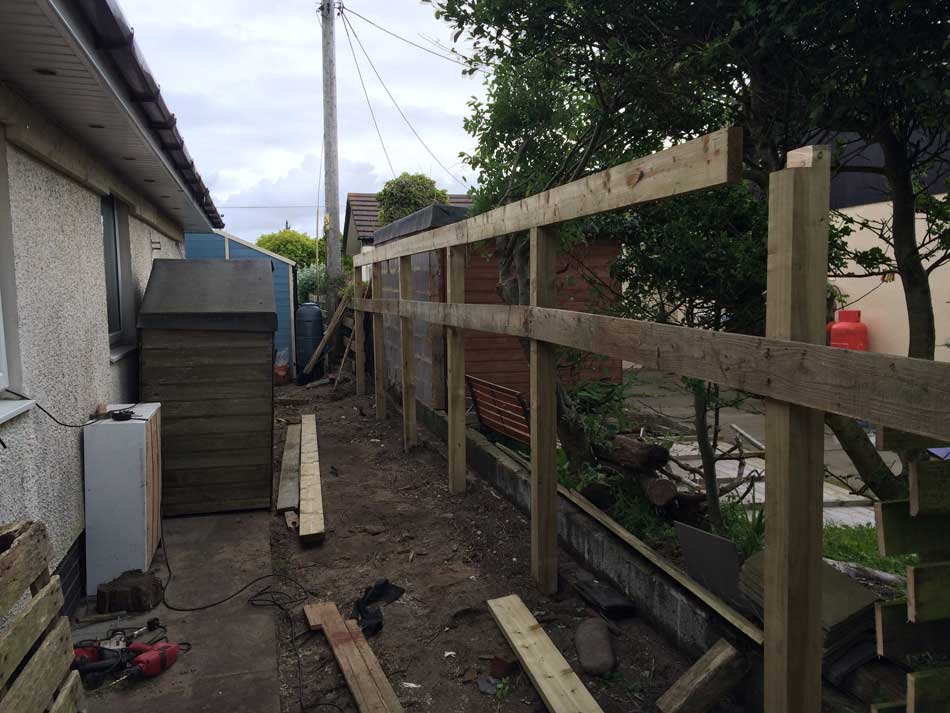 We then made a start on cutting out the rafters and attaching them between the purlins. 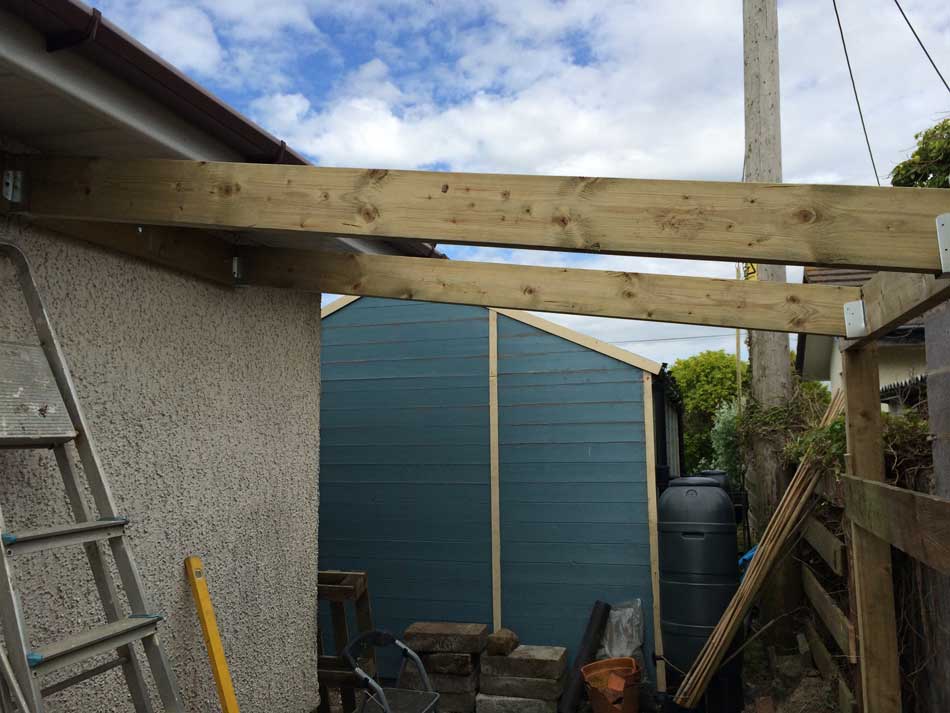 We had a few other things to do today as well so by the end of the day we had several rafters in place. Once again, without the plastic sheeting, or more specifically the jointing pieces between them we weren’t sure exactly where the joints would come and therefore couldn’t position the rafters precisely. 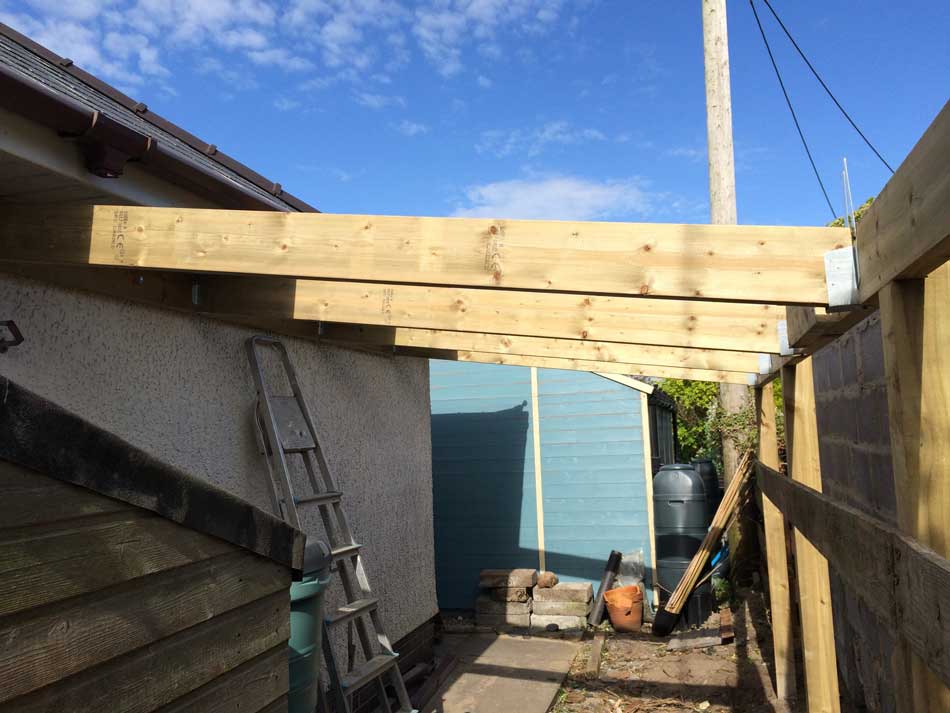 Progress with the Build

We were also held back a little on Saturday by a powercut. It wasn’t a full powercut, just a significant lowering of the amount of juice we had access to. Some things would still come on, but nothing would work properly. This included the chop saw. The blade would spin, but it wouldn’t spin fast enough or with any power so it wouldn’t cut. We ended up spending a bit of time trying to work out what was wrong with it before we realised that it was just a lack of power to the house. It turned out that it was actually a lack of power to all of Borth and Ynyslas but it was sorted by dinner time.

Sunday was a little less windy and a more pleasant day for working outside (after a quick bike ride of course!). We finished off the rafters and installed some guttering. This will all have to be moved and replaced once the sheet plastic finally arrives but at least it is now all ready to go. 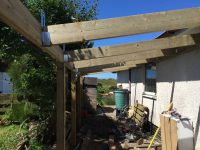 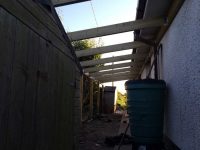 Ready for the Roof 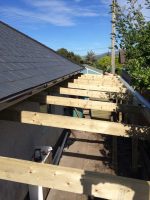 Rafters and Guttering in Place

There were plenty of other bits and pieces to do to get to this stage. Making sure the rafters were all at the same height, cutting joist hangers to size, making attachment points for the drainpipes and forever moving the shed from one side of the area to another. 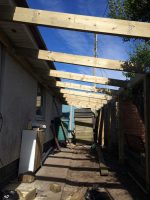 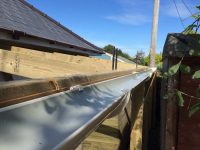 We also had a break on Sunday to head to the Strawberry Fayre in Aberystwyth for an hour or so.

As usual here were plenty of things to to hamper progress, a lack of materials, the weather, power cuts were just a few. Despite these we did make progress and now have the framework constructed for a lean-to. The plastic sheeting was finally delivered late on Monday – too late by then as I was now back at work. My parents were still there as they wanted to go to the Aberystwyth Junior School Proms to see Morgan playing in the orchestra and singing in the choir. That wasn’t until the evening so we met them on campus after work, and then finally got to see the sheeting when we got home at around 10pm. Too late for doing anything with it now and as I had to go to work on Tuesday morning as well, it is going to have to wait until the weekend before we (Anna and myself) can attempt to install it.

Hopefully we’ll have it firmly attached to the rafters before too long and we’ll have a nice long, usable lean-to all the way along the back of the house. It will, no doubt soon get filled up with stuff but we hope it’ll at least protect some of our ‘stuff’ and will give us a good, covered area for such things.

Building material are never cheap. We ended up spending:

We still have slats for the fence to buy, a couple of tonnes of gravel, some membrane and more screw and nails to finish it off so we’re probably looking at another £300 yet, so all in it’s probably going to cost around £1500, but it should last a while and gives us a good looking, usable space rather than a messy dumping ground.

I’ll update you once we’ve finished it off.