Well, it’s Boxing Day so we have survived the madness of Christmas Day – Hope everyone else had a good day, we did. Lots of food, lots of drink, lots of fun and lots of games. Lots of presents under the tree, lots of lego and lots of fiddling with gadgets and lots of family time together.

Our Christmas Day pretty much followed the same pattern as Christmas Days past, which is I guess all part of the tradition. Morgan was up at 5:30am and into our bed to open the presents in his stocking. The fart machine was of course the star of the show here and the start of things to come!

It was then time to get up and have some breakfast and to check if “he’d been” The house was soon filled with the warming scent of croissants and coffee and Santa had indeed been as there were plenty of presents under the tree.

Presents under the Tree

It wasn’t long before we were making a start on them and everyone seemed to be getting everything they had hoped for. I took up my position of reading out the labels which gave me chance to use my new glasses! Morgan had more fart related toys in the form of a whistle and a giant whoopee cushion.

He also had LOADS of lego, a new onesie and some monster feet, a marble run, a new mattress which he was more excited about than we had expected and a new Mac Mini, a monitor to go with it and his much wanted Apple Magic Mouse 2. Along of course with sweets, chocolates, games, books, minecraft annuals, vouchers and plenty of other things. 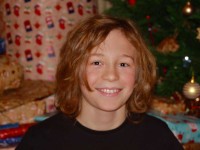 Anna had lots of clothes, new boots, chocolates, smellies, socks, an activity tracker band and lots of other girlie things!

I had a GoPro Hero 4 Silver camera  to replace the GoPro I had for my 40th (that had stopped working a couple of years ago), lots of accessories for the GoPro, socks, pants, smellies, cider, chocolates, sunglasses and a huge towelling changing poncho that Anna had made. 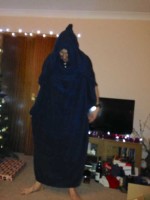 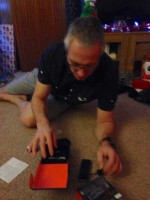 We also had lots of joint presents, many of which were from me! Two volumes of our weblog book which always pleases us, a 2016 family calendar, an Amazon FireTV Stick, along with a couple of family games, boxes of sweets and bottles of wine.

With the Christmas presents open it was time to phone the family, eat a few snacks and start playing with our toys. Morgan’s computer was set up and we built one of his lego models – a cool Camper Van with a Canadian Canoe. 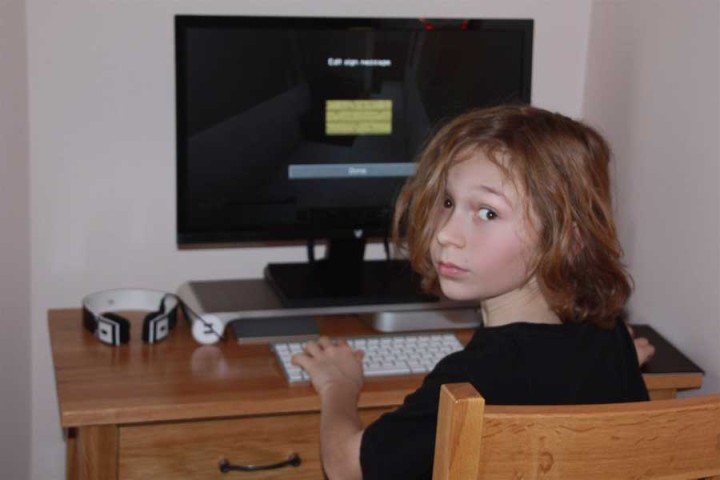 Anna meanwhile was working hard in the kitchen and it was soon time for a delicious dinner with all the trimming and of course Christmas Crackers. With just the three of us eating it never lasts quite as long as it should do, not helped by the fact that it was only me who could manage pudding!

The afternoon was spent playing with toys, fiddling with gadgets and for Anna snoozing on the Sofa. Morgan’s computer was set up, but for some reason the screen occasionally flashes black, so we’ll have to sort that out. The FireTV Stick was played with – It took a fair bit of fiddling to get it working as we had the usual Wi-Fi connection problems that we always seem to have here. Once connected to the network it looked really good. The user interface looks nice, the content looks promising and having our photos on Amazon’s Cloud Drive means that we can have a personalised photo screen saver on the TV. However, it doesn’t really work for us. We tried to stream some content from it and our Internet simply isn’t fast enough. We got a warning from it to this effect but thought we’d give it a go anyway. However, after lots of waiting it simply couldn’t do it so we gave up. Instead we tried streaming some Christmas music from Amazon Music through it, but our broadband connection seemed unable to cope even with that. So, unfortunately until we get better broadband it might not be much use.

Morgan and I started work on building his marble run as well, but it’s quite complicated so we’ll finish it (hopefully) another day – there’s plenty of Lego models to build before that anyway.

Christmas All Wrapped Up

The evening meal was a help yourself affair with cheese and biscuits, along of course with some cold turkey, followed by a Christmas pud with clotted cream for me and then lots of sweets and chocolates. After a few family games and some more playing with gadgets it was later than we thought. Morgan was quite looking forward to sleeping on his new mattress so even bedtime was quite exciting for him and then it was almost midnight so time for Anna and I to head of for a sleep – I’d be up again in a few hours and had an early morning sea swim planned.

All in all a lovely Christmas Day and a perfect family day. We didn’t even venture outside once. The weather wasn’t up to much mind you so I don’t think we missed much, but we’ll have to force ourselves out for some fresh air on Boxing Day. Merry Christmas everyone hope it was all you wished for.