We’d been planning a Boxing Day Swim for weeks and as usual the list of people coming kept growing and growing – I was beginning to wonder if we’d have enough Christmas cake, mince pies and biscuits to go round as I’d invited everyone back here after the swim for warm drinks and cake to recuperate after their early morning swim.

It was a large Spring High tide at around 8:15am so the time of the swim at 9am was determined so as to give us the option of swimming off the seafront or in the estuary depending on the wind direction. As Boxing Day crept ever closer it looked likely that the Estuary option was going to be the best choice as strong SSW winds were forecast.

Of course, as expected as the day approached a number of people had had said they’d be there started sending text messages and posts on Facebook saying they wouldn’t be able to make it. Too tired, too hungover, too ill, too cold, to grey, too rough, too lazy, the excuses started coming in thick and fast.

I was still quite ill myself and have been now for weeks. I feel OK now and then but as soon as I do anything slightly strenuous, or the ibuprofen and paracetamol wear off I feel terrible with headaches, all over joint and muscle aches, the odd nauseous moment and the occasional numb face too. I just feel weak and pathetic (and get grumpy with it too apparently), but I wasn’t going to let that stop me getting in the sea for a Boxing Day Swim.

I was up early as usual on Boxing Day and awoke to yet more text messages and Facebook posts saying that people wouldn’t be able to make it. In fact, by my reckoning there were only two possible people left in the running. Richard Huxley who had never been that committal as he was swimming later in the day in Aberystwyth as well, and someone I’d never met before called Vanessa. She was from Ireland but was staying in Aberdovey for Christmas. I did get a message from her as well though saying that she thought the Dyfi Bridge was closed so she might not make it across.

9am arrived and it looked as though I’d be on my own as usual so I headed off into the gloom for the short drive to what was a very grey and bleak looking Ynyslas Estuary. The tide was still high so after a quick play with my new GoPro camera I put on my goggles and hat and headed out into the water. 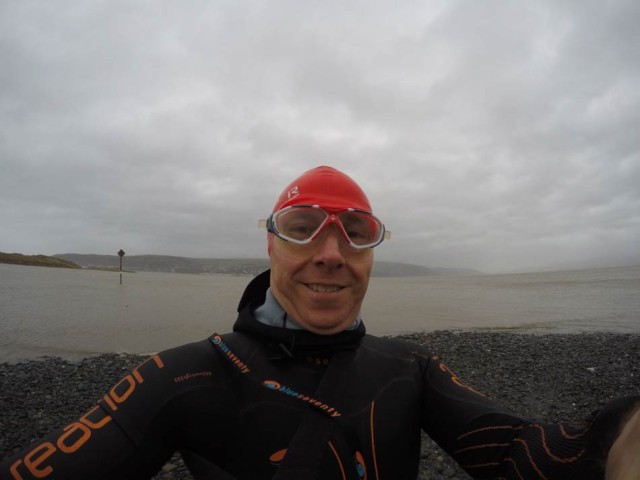 The water is actually fairly ‘not cold’  at the moment so with my wetsuit, hood, boots and really toastie gloves I was fine in there and didn’t feel the cold at all. I did feel a bit of a fraud 10 minutes later though when Vanessa turned up and joined me in just her swimming costume. I made a few excuses about having a cold and such like but still felt a bit silly with so much neoprene on in comparison. Mind you, it has to be said that it’s also really nice having decent kit to keep you warm and a house on the beach with a nice warm shower to return to. 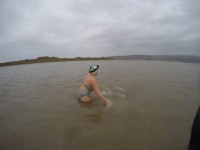 We swam for a bit then headed back home for tea and biscuits and a little chat about what sounds like a very lively and active outdoor swimming scene in Dublin where Vanessa lives. Certainly very different to here where I was expecting to be the only one out. I’m sure there were more out in Aberystwyth come midday, but when I live this close to the sea I just can’t see the point in making an hour round trip in the car to get in the sea, even if it involves some socialisingg too. Vanessa headed off to join them too for what would be her second dip of the day.