After packing in so much stuff yesterday, it was hard to believe that this was only Day 2 of the Aberystwyth Silver Bands twinning tour to St Brieuc, but day two it was. The planned walk around St Brieuc had howver been cancelled as everyone eas tired, everyone needed a bit of a rest and everyone wanted some time to just chill. Except me of course, I was up at 6am, a little later than usual but still a lot earlier than everyone else. It was also very dark, too dark for cycling so I went for a little run into St Brieuc instead. Nothing too strenuous just 4 miles or so with the crescent moon and a very brightly shining Venus for company in the skies above.

Once back at the hotel everyone else was still sleeping so I had a shower, followed by a rather large buffet breakfast, then got into my cycling kit as dawn broke and headed off for a bike ride. My plan had been to head North along the coast towards Paimpol and then come back along other roads a little inland to make a loop. This is pretty much what I did, all at a nice fairly easy pace, with the odd stop to check the map and see where I was going. I probably should have brushed up on my French road signs before heading out really though as I kept coming across roads that were equivalent to motorways that bikes were prohibited from, so had a few detours to miss these out. I found my way here though and had a nice there and back, even if many of the roads were a little more ‘main’ that I had hoped.

I should really have stopped for more photos, especially from the huge bridge just outside of St Brieuc, and for some of the coastal views further north as well. Instead, all I took a photo of was a windmill. 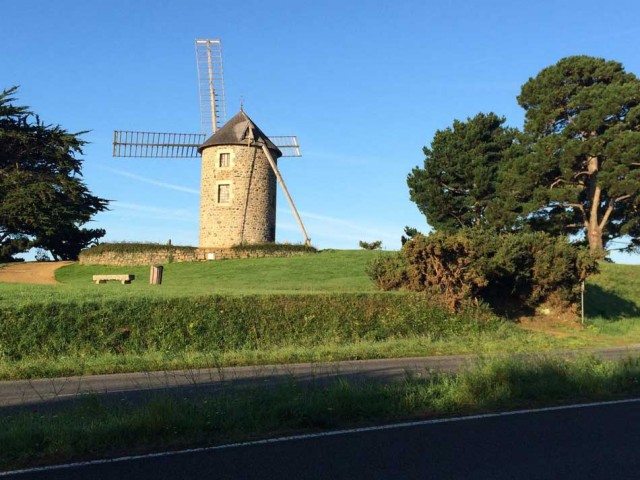 I returned to the hotel as predicted just before midday to find that Anna and Morgan had spent much of the morning playing in the pool and seeing how many people they could fit into the hot tub. 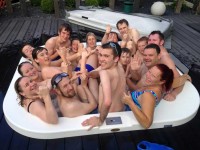 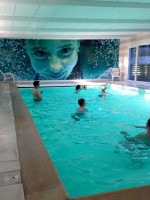 There were also stories about Ivor having got locked out of his room and was eventually forced to have to go downstairs to reception to get a spare key. Sounds innocuous enough and an easy mistake to make, but not when completely stark naked! I pity the poor people on the reception desk, they will probably be scarred forever. You’ll be pleased to hear that as far as we know, no- one has any photographic evidence of this little incident.

Our afternoon engagements didn’t start until 3pm so we had time to wander over to the huge supermarket not far from the hotel to buy some lunch and a few local treats, and then eat our lunch whilst basking in the glorious sunshine on the hotel balcony.

Our afternoon’s activities arrnaged for us by the Twinning Committees was a visit to the Foire Expo. We weren’t really sure what this was, but the Band were performing a concert there later in the day so we were all given free passes to the expo. I’m still not really sure quite what the expo was in aid of or what would bring such an eclectic mix of products, services and entertainment together, b ut it was nice to wander around. Morgan went off with the other boys so Anna and I had some time to ourselves taking a look through just a few of the hundreds upon hundreds of plush campervans that we couldn’t afford, trying some of the fried fruit from the many food stalls in the food hall and then being bewildered by the collection of other stalls and show-stands that were selling hot tubs, conservatories, wood burning stoves, sheds, three piece suites and all other manner of things. There was even a huge building dedicated to mobility scooters and stair-lifts. There was also a large New York exhibition that we quickly walked through but we didn’t really have enough time to explore fully as the band were due to play.

The band had already set up and had a little practice so they were pretty much ready to go. 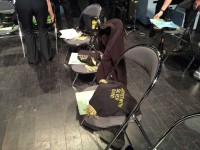 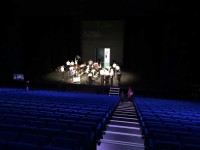 On the big stage

They were playing in a large theatre on site so had set everything up to look really nice. No one knew quite how many people to expect in the audience,as it was quite a large venue, and I do think there may have been a few pre-performance nerves for this event. 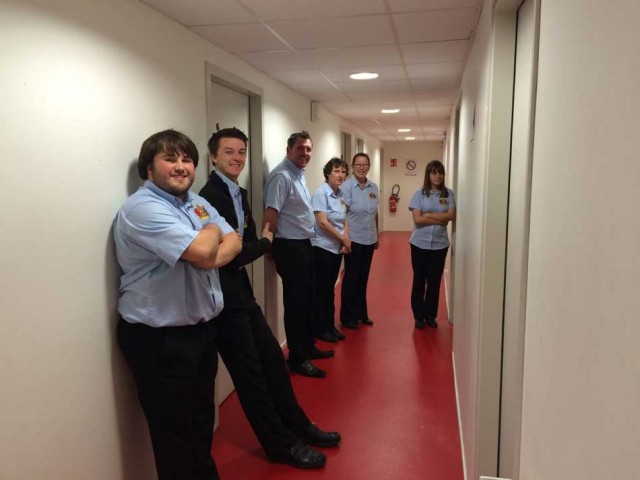 In the end there weren’t that many people and it was quite an intimate concert and fairly relaxed, similar in style to the concerts the band do in Aberystwyth over the summer. They even invited members of the audience up on stage to play the Big Bass Drum and conduct. The band members also had a little surprise for Ivor and Neil though after Ivor’s antics the night before – Neil had been slightly involved too so everyone else was going to play the strip-tease music for a particular song rather than the one on the programme. Only Ivor and Neil had the music that was on the programme and therefore didn’t have the correct music for the strip-tease. It was quite funny watching their faces as the realisation of what everyone had done dawned on them. I’m not sure that the audience quite got the in-joke, but it was funny all the same.

After the concert we all wandered over to another part of the expo grounds where we were treated to yet another huge buffet dinner, complete of course with free beer and wine. The food went down nicely and everyone was having fun as day 2 of our tour to Britanny came to an end. 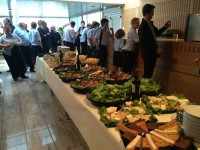 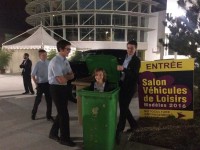 Another lovely day thanks to the various bands, orchestra’s and twinning committees that had arranged it all.