I’m hoping that isn’t the end of summer but yesterday’s evening swim was definitely less summery than of late and it’s raining again this morning. I even had to put a jacket on after my swim in Aberystwyth last night as it was getting quite chilly and we had to put the headlights on during the drive home too. The sea was pretty rough as well so the swim itself took on a completely different feeling to recent swims. I was tossed around by the waves and visibility was back down to it’s usual – which is virtually zero. I still had fun out there ploughing up and down the bay in Aberystwyth.

The swim was followed by  my usual tuna baguette from PD’s Diner whilst sitting listening to Anna play in the bandstand. The band actually played some different pieces tonight which made a change. They did of course do some of their old favourites too and the madness of Aberystwyth was still present as can be seen by the audience participation in this clip of  ‘Is This the Way to Amarillo‘ from last night!

A sea swim and silver band were just the tonic after a busy day though. I’d spent most of it at the computer working and then once again battling with broadband woes. Since the BT engineer came around about 10 days ago and changed our sockets and some settings on the line our Broadband speed had jumped up from 0.9Mbsp to 2.9Mbsp which seemed OK. However, the speeds gradually tailed off yet again and over the past few days we had been back down to an unbearable 0.7Mbsp. We had therefore scheduled for another engineer to come out and take another look.

This one found a fault on the line which he fixed and then set to replacing the line between the little box on the side of the house and our main socket in the hall. This required no only drilling through our new soffits and some brand new cabling, but lots of crawling around in thick piles of loft insulation for me. He wasn’t allowed to go in the loft as it isn’t boarded out so I had to do that bit and then help him route the cable back through the interior walls to the socket.

Once it was all done however things had improved significantly and we had our fastest broadband speeds ever – Whether this was the new cable r the fixing of the fault on the telegraph pole we don’t know, but for the first time ever we had speeds exceeding 4Mbps. 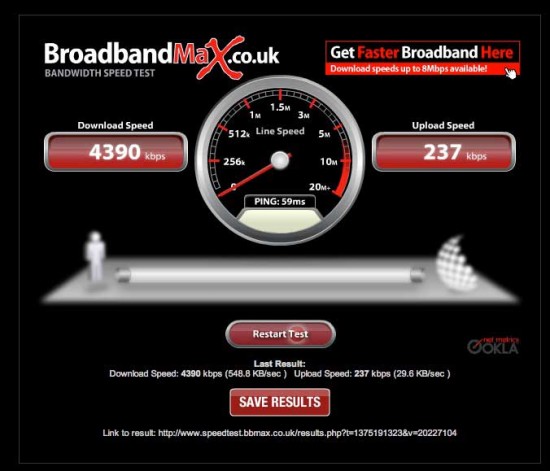 We now have to go into yet another 10 day testing period where speeds will fluctuate before it settles down, so we’ll have to wait and see what happens – No doubt it will gradually decrease until it becomes unbearable again! I’ve done two tests this morning, one at 2.3Mbps and another at 0.5Mbps – That doesn’t bode well.