Another early start in St Brieuc for me with an early morning run into Langueux and some rummaging around for a geocache. 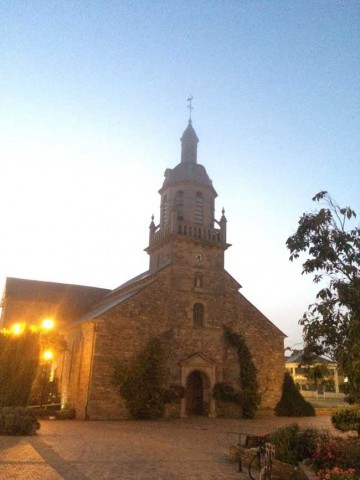 I couldn’t find the first one so had to run a little further to find a different one, but had success in the end as dawn broke in St Briuec. It was then back to the hotel for another huge buffet breakfast with Anna and Morgan before we got ready for a coach trip along the St Brieuc coast.

This trip took us along some of the roads I had cycled along yesterday and then out to a viewpoint that I hadn’t visited. It was a little misty here but we could still see some nice views along the coast and visited some memorials.

Fun in the Sun

Morgan at the Memorial

We then drove further up the coast to the beach and harbour at Binic where we wandered along the prom, had a paddle in the sea (well, Morgan and I did as we couldn’t resist it). We then walked over the harbour bridge where loads of large fish were swimming beneath us and into a luxury restaurant called La Sentinelle where we were having lunch.

We were paying for this ourselves for a change as so far we had been spoilt with free buffets everywhere we went, but at only 16 Euros per head we ended up having a huge meal which was really good value. 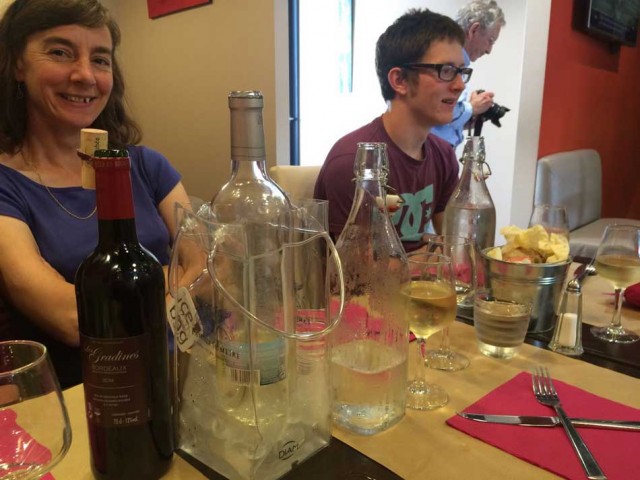 We didn’t have any choice from a menu so just had what we were given but that was fine with most of us. With plenty of wine and bread on the table at first and then some aperitifs to get us going, we soon moved onto a lively fish pie for starters. Next up was Plaice with vegetables and something else that I can’t quite remember as our main course. This was quite enough really, but the food continued with banana’s and chocolate sauce for dessert, all followed by coffees with biscuits and then a final calvados to wash it all down! Not bad seeing as this was only lunch and only cost us 16 Euros. Mind you, a few people who weren’t so keen on fish were struggling a little with what had been fish for every course of every meal so far.

After lunch we wandered around the harbour and then a few of us went for a quick swim in the open air sea pool. This was of course pretty much instigated by me, and  Morgan, Nicky and Malachi joined me. The water wasn’t too cold really, although Morgan was shivering quite a bit afterwards. 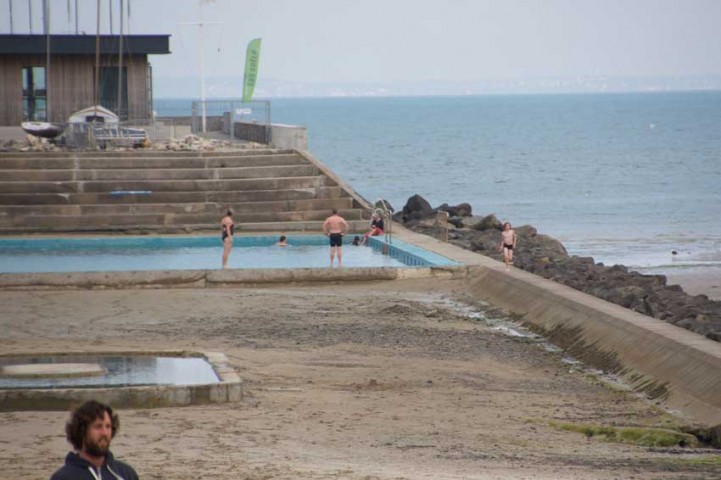 Time for a Swim

This was followed by doughnuts, sweets and ice creams on the prom – as if we needed that after such a large lunch! We then piled back onto the coach for a drive back to the hotel where Anna and I supervised the children in the pool for a couple of hours.

The band were supposed to be playing another small concert in the evening, but there was something of a mix up and there was unlikely to be an audience so this was called off. It was also a bit of a rush I think as we had to be ready to leave at 8am in the morning in order to get the ferry back to the UK. Our coach driver therefore had to be back to the hotel and out of the coach by 11pm to give him the required 9 hour break that he needed before starting the journey the next day. We therefore headed into a village on the banks of Le Gouet and a restaurant in the shadow of the huge bridge over the valley. We were greeted with the hospitality we had now become accustomed too. Free drinks and canapes as the sunset and then a huge slap-up meal in the restaurant. 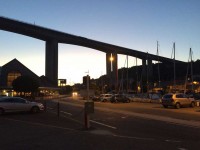 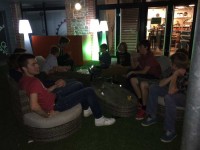 The starter was an absolutely delicious seafood vol-au-vent. Certainly not something I or Anna would usually choose but it was gorgeous. Packed full of scallops, mushrooms and a fish sauce and accompanied by some prefect prawns. Mmm Mmm. Those that had been ‘fished out’ by now after our fish lunch were beginning to struggle a little with the onslaught of fish, but most of us were loving the food. The main course was a little different as well, but once again delicious for the most part. A bed of rice that looked and tasted more like rice pudding than any savoury rice we would be used to, topped with some lovely fillets of Pollock that was then covered in a thin gravy and served with a local delicacy called Chitterlings. Chitterlings are pork sausages made from pigs’ intestines and stomachs. They looked a little unusual on the plate and had quite a strong smell to them. I have to say that I did taste it and although it wasn’t bad, it wasn’t the best thing I had eaten so far on this trip. A few people did like them though, but most of the band members were put off once they knew what they were. I hope the our French hosts weren’t offended by the laughs and the fact that most people didn’t eat them, or by the fact that some people were now joking about the amount of seafood we had now been served. I for one was loving it as the food and hospitality had been amazing. Morgan who is a fussy eater at the best of times did politely tell them that he didn’t like fish (a lie really as fish is actually one of his favourite things) so they brought him some chicken and chips. Some of the other younger boys would have preferred this too but had already been served the fish. To be fair to the boys, it probably was a bit of a grown-up meal for them. 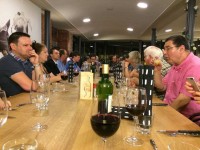 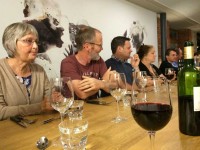 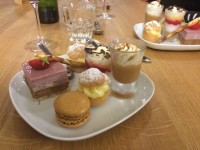 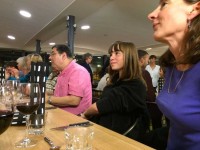 Ready for Dinner – Lucy and Elen 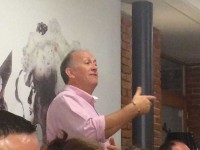 Pudding was good as well, with a whole selection of little mini desserts – Most people were well and truly stuffed by now though so I ended up having three plates of them as I helped others out!

Thank-yous and goodbyes were then said and the rest of the wine finished off and then all too soon we had to rush off Cinderalla style to get back to the hotel before 11pm so that the coach driver didn’t turn into a pumpkin, or possibly around here a lobster. The younger boys in the group who had missed out on much of the fishy dinner were a little hungry though so Anna and I promised to take them over to the McDonalds near to the hotel to get them a burger. Unfortunately the McDonalds restaurant closed as we got there, but we were told to go to the Drive Thru. We of course didn’t have a car, but undeterred and with our best acting we jumped into a make-believe mini-bus and went through the drive though. This was greeted at first with disdain by the employees there but then one of them with amazing English served us and the boys were nourished and happy.

And that was that, time to pack ready for one final big breakfast at the hotel as the sun rose and then we were off on the journey home. 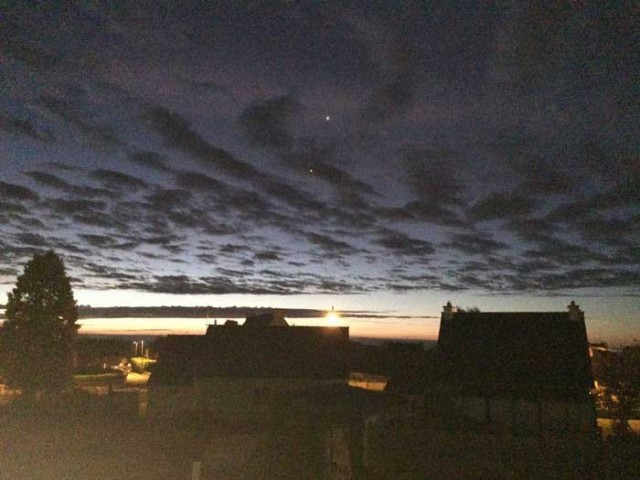 The journey home was fairly uneventful. 1.5 hours on the coach to St Malo, a 9 hour ferry crossing and one last fish lunch for me in the form of a very nice and surprisingly good value tuna pizza, and then back on the coach for at least another 6 hours through England and into the driving rain of Wales so that we arrived in Aberystwyth just after 1am. We unpacked, off-loaded various things to the band room and said our goodbyes so that we arrived home sometime around 2am in the morning – exhausted.

A good trip though and hopefully it has helped build relationships between the twinned towns of Aberystwyth and St Brieuc.  Everyone had fun, the band played and I’m sure it was fairly educational as well as good fun for Morgan too