Once again we were having a ‘pre-weeked weekend away’ – We’re enjoying these, a couple of days away before the weekend and then a weekend to chill and get on top of chores at home. After a day at Bodnant Gardens, Conwy and Llandudno on Thursday we drove back along the A55 in the pouring rain to Dolgarrog and the main reason for coming here, Surf Snowdonia.

I’m sure most of you know what this is, but it’s a giant inland lagoon with an impressive wave machine powered by a huge underwater plough. 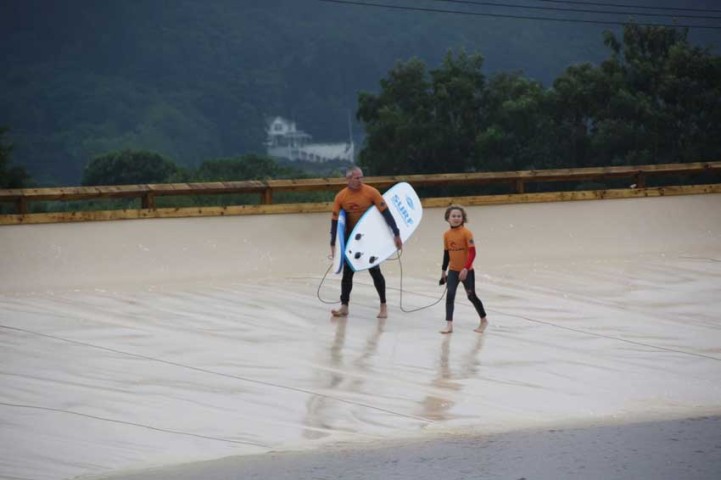 Off for a surf

It’s a little strange to start with, but once you know where the wave breaks the beginner wave is easy enough. It’s actually a nice mellow little wave. Catch it as white-water and then you can ride some open face into the beach of you head towards the middle of the lagoon. Morgan was having a great time and was happy to have got to his feet. He was quite chilly by the end of his hour though, more so than he would be in the sea as there’s very little effort involved in paddling out and therefore nothing to warm you up.

Morgan on his Feet

After our hour, I had a quick changeover – changing my rash vest, grabbing my board and then back out onto the intermediate wave. This was a weird wave though, no one was really quite surf where to catch it or what it did and there seemed to be quite a few problems with the plough generating the wave during my hour. I think the idea is to catch it as whitewater and then it cleans up into an open face in a deeper channel along the middle of the lagoon. This didn’t seem to be working properly though and there was just no real power or steepness to the wave. This wasn’t helped by the fact that I was on a little 5’10” fish. After a few attempts it became clear that this board wasn’t going to be suitable, my only other option was a 6’4″ but that wasn’t going to be big enough either. The other guys out on the intermediate wave were on longboards, and even they were struggling to keep going and keep the boards afloat with so little power in the wave. There was a lot of sitting around waiting and paddling from one end of the lagoon to the other as the plough wasn’t working properly so would quite often do a slow run along the lagoon not generating a wave.

Essentially the hour on the intermediate wave was a waste of time, but Surf Snowdonia recognised this, admitted that there had been problems with their machinery and gave us all a refund. Morgan wants to go back again so no doubt we’ll be back soon for another beginners session for Morgan and an advanced wave session for me. Overall it’s a nice place, the machinery is impressive and once the surrounding grounds are finished it’ll be a nice place to spend some time. The advanced wave looks good and certainly provides some decent waves for those god enough to make use of it. 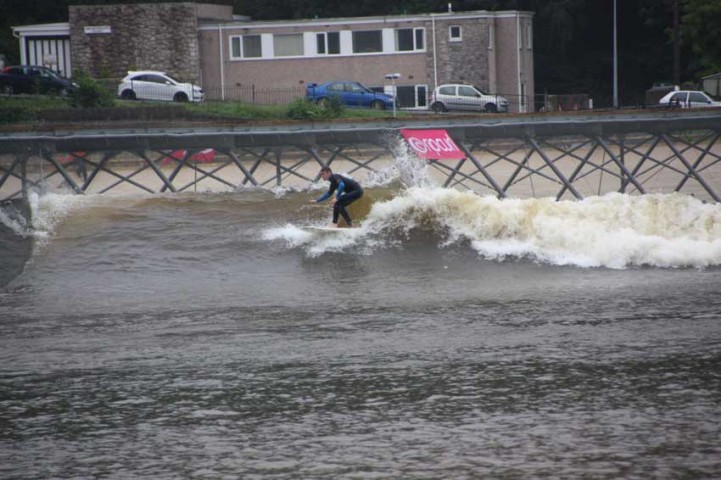 The beginners wave is good too, but I don’t really think there is much there for those in between. [NOTE: Since getting back, we have looked at the Surf Snowdonia website and they have updated a number of things, including the following line about the Intermediate wave: “The best boards for  this bay are either Long boards or Mini Mals.  Board rental is free for the intermediate waves”… That wasn’t on the website before and wasn’t the case. In fact Anna specifically asked if I’d be able to use one of their longer boards on the Intermediate wave if my boards weren’t appropriate and was told that I wouldn’t unless I had already paid for and pre-booked one. It also says that “During your freesurf session there will be maximum of 2 surfers on the wave.” Again this wasn’t the case for me as there were three of us all trying to catch the same wave throughout the session.

After our session on the waves, we got changed and headed off across Wales. Stopping first just down the road for lunch at the Treetops Adventure place where we went for my 40th birthday. We were off to Welshpool for a wander around the garden centre, some caching in the nature reserve and then off to a geocaching event.