It was the first day back for the Scouts after Easter on Friday so we took them for a lovely walk from Talybont to Borth.

Anna wasn’t there as she was off to a swanky awards ceremony at the university. She had been nominated again for the Support Staff of the Year award and came away from it with a certificate for ‘highly commended’  – another thing for her office wall and her CV!

I was therefore left in charge of Scouts for the evening along with help from Chris our Assistant Leader and two parent helpers Leasa and Colin. 12 Scouts turned up as a few were unable to make it and we set off promptly from the green in Talybont. These are my favourite sort of Scout activities really, outside in the fresh air with the kids enjoying the world around them. Other than planning a route, making sure we have adequate adult to child ratios and doing the necessary risk assessments and such like associated with this kind of activity there isn’t a huge amount of planning involved and not really much to do once out there. This means that I can enjoy the walk too and chat to the Scouts and other leaders as we go.

There are a few routes you could take from Talybont to Borth, the most obvious from the map is probably the one that follows part of the Borth to Devils Bridge Footpath, but I had picked a slightly longer, more circuitous route as I thought it was more interesting. I know most of it pretty well as I often run these trails and have geocached along here with Morgan too. I was a little unsure of the path between Riverside and Millside caravan parks though so had ran along here on Wednesday morning just to check it out in preparation for this walk.

We were soon underway and heading across the River Leri and into Talybont woods at a fairly decent pace. The leaves were just out on the trees, the skies were overcast but there was very little wind and it was a perfect temperature for walking. The group fragmented a little as we walked through the woods alongside a drop down towards the River Leri which meandered below us. We would be following the river all the way during the walk. The trails were easy to follow though and all very safe so it didn’t matter if we split up a little.

We stopped at the gate at the end of the woods for everyone to catch up, and had a group photo before heading off across to the field to an old ruined farm which the Scouts enjoyed exploring. The views opened up as we walked across the field too so we could see the hill behind us with the wind turbines spinning on their tops and plenty of fresh green Welsh countryside all around.

We then weaved our way back into the woods and down into a ravine and a footbridge across the river. This took us into Riverside Caravan site where we stopped to re-group once again. We were soon off again though finding the hidden footpath out of the caravan site and up into the fields on the southern side of the River Leri. We stopped at a stile in these fields for some biscuits and then headed on our way, dropping down into Millside Caravan Park in Dolybont along with it’s nice little pond. 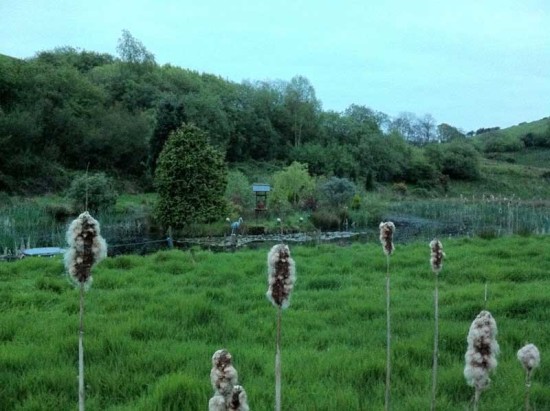 We then crossed the River Leri once again over the humpback bridge in Dolybont then turned left towards Borth. This section was along a very quiet road but there was still plenty to keep the Scouts occupied, including a beehive apiary that I pointed out to them and loads of vergeside goose-grass for them to try sticking to each other!

It was now getting a little late and we were going to miss our ETA point at Borth Animalarium so I tried to hurry them along a bit, but some of them were tiring now. We crossed the River Leri a final time over the footbridge into Glanleri Caravan Park and walk the final few hundred metres along the banks of the river as dusk fell. We arrived at the animalarium at about 9:20pm where parents were waiting to collect their offspring. We said we’d be there sometime around 9:15pm so we hadn’t done too badly. All in all we’d walked almost 4 miles in just over an hour and a half, but best of all there were no incidents and everyone had a good time. Definitely a walk worth repeating.