Aberdovey may only be a mile from here as the crow flies, but it’s about an hour away by car so we don’t go there that often.

However, it was the Boardwsie Demo day in Aberdovey at the weekend, Cerist Tri Club were doing an open water swim from Aberdovey, Anna’s Mum was here, and we didn’t have anythign planned, so a day trip to the other side of the estuary seemed like a good idea. Morgan wasn’t that keen due to the long drive, but we convinced him in the end and planned to go crabbing as well.

It did indeed take an hour to get there, but at least it feels as though you’ve gone somewhere and it is a different world over there. Although only a mile away, the fact that it is south facing makes all the difference. It’s much more sheltered too so has less wind and feels like a tropical tourist resort in comparison to Ynyslas. The vegetation is different, the atmosphere is different and it feels like a holiday destination. Ynyslas is quite bleak and foreboding in contrast. However, the warmer, more sheltered nature also brings in the tourists so it is quite busy, quite expensive and a little bit to ‘snobby’ for our liking.

It’s nice for a day trip though and once there we had a quick look at the windsurf boards and then we were soon hanging over the edge of the harbourside railings with a crabbing net full of bacon catching crabs. There weren’t loads about but we caught a few nice ones and Morgan seemed to enjoy it. I quite like it too as a relaxing way to pass some time in the sunshine. 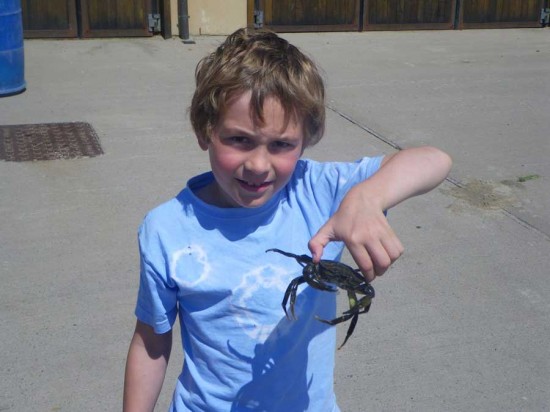 We then drove up to the bit of beach known as ‘Graveyards’ where I met up with some people from Cerist Tri Club for a swim in the sea. It was nothing special as far as swims go, just an easy cruise up and down the coast a little, covering a mile in total. Anna, Morgan and Pat wandered over to the beach as well and sat there playing on the sand while we swam.

Once back at the cars and changed we drove back into Aberdovey for lunch – We weren’t too impressed though as the service was terrible and the food very expensive – I guess that’s to be expected from a cafe in Aberdovey really. We then went crabbing again whilst watching people from the outdoor pursuits centre jump off the jetty before heading home after a whole day out.

Back at home I ate far too much again and had far too many puddings.

Sunday was a similar affair as far as calorie consumption goes. For me it started with breakfast and second breakfast and then a swim in the pool in Machynlleth. This was followed by coffee and a flapjack in the cafe. The plan for lunch was a carvery. Thankfully we didn’t go to the Marine as the pudding table would have been too much for me to resist, but instead we had a very nice and very much cheaper carvery at Ta Med on the university campus. A full carvery and a pudding for £6 each (£2.50 for Morgan) – can’t be bad. We then popped into town before heading home where I just couldn’t stop eating.

Looking at my food diary I ate over 8,000 calories each day on both Saturday and Sunday! Terrible I know, but once I get going I just can’t stop. That coupled with the reduction in training lately means that I’m feeling a little fat and unfit so it’s time to start being a little more disciplined now. Time to cut the calories, improve the quality of food intake and up the training again. Only 10 weeks to go until the World Champs in London so time to start acting, training and eating like a triathlete again.