Running in the Hills

Anna was working on Saturday as it was an Open Day at the University, so that mean that for the third week in a row I was unable to continue with my Coast Path Run project. Someone had to be at home to look after Morgan, but we did decide that it would be OK to leave him for a couple of hours whilst I went out running in the hills instead.

I’d hatched a plan and devised a route that started in Tre Ddol meaning that there was minimal time spent driving. It took me up a huge long climb all the way to the top of Moel y Llyn and then from there over to Moel y Garn where there was a geocache that we had yet to find. I planned to stop there, find the cache and then head back down into Cwm Clettwr and back to the car. My measurements had it at close to 11 miles so I’d allowed around 2 hrs 15 minutes for the run, meaning that Morgan would only be left alone for about 2 ½ hours altogether – barely enough time for him to even notice I was gone if he was playing on Minecraft!

As in previous weeks, I started my day with a little bit of work and then 90 minutes on the turbo trainer. As it was the end of a recovery week though the actual session on the turbo trainer was a fairly low intensity one. It was courtesy of the TrainerRoad workout Andrews which consists of 90 minutes aerobic endurance riding spent somewhere between 65-75% FTP. Although not particularly taxing I still felt fairly tired by the end of it. 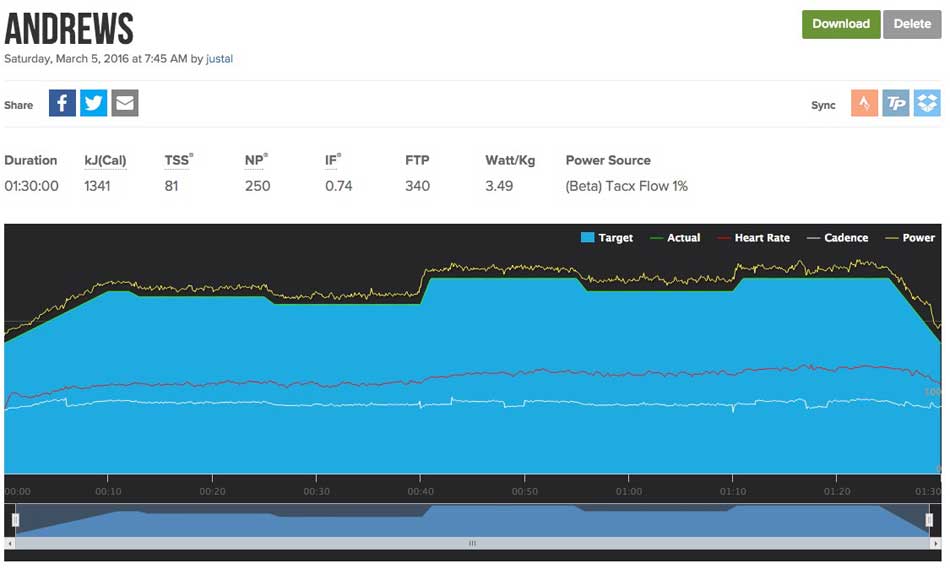 There was no time to dwell on feeling tired though, I jumped off the bike, jumped into the shower and then put on my running kit ready to head off into the hills.

Running in the Hills

We had a fair bit of snow here yesterday and I had been expecting the tops of the hills to still have a decent covering, so I loaded up my rucksack with the usual essentials for a day in the hills. Map, compass, water, flapjack, survival blanket, spare layer, coat, another flapjack and my phone and headed off. I couldn’t see much snow around now though as the rising temperatures and sunny morning seemed to have melted much of it, but I was sure that there would be more as I climbed into the hills.

The first section of the run through the woods behind Tre Ddol were taken at a nice steady pace. The recent strong winds had blown a few trees down so there was some scrambling under and climbing over of trees that were across the track. As I crossed the little stream of Afon Ddu, a large tree had fallen on the bridge and smashed the railing to smithereens, thankfully the main span of the bridge was still intact so I could keep my feet dry on the bridge whilst ducking under the huge fallen tree. From here, the route headed upwards, along the long forestry road on the southern side of Artists Valley. This road goes on seemingly forever, climbing high into the hills. Progress was good though but after miles of climbing I was glad to finally turn right off the track and onto the steeper climb up towards Moel y Llyn.

There was a fair bit of snow around now and the path was a little slippery in places so I was forced to walk a few of the steeper sections. As I emerged out of the forest I was confronted by a biting wind and a snowy hillscape. My route took me onwards, across this snowy landscape and ever higher to the large cairn at the summit of Moel y Llyn (which you can just see on the horizon in the photo below). It was pretty tough going through the tussocky grass and bog here so there was more walking and trotting than running going on, but that gave me an opportunity to take a photo and have a bite of flapjack as I picked my way through the tough terrain, 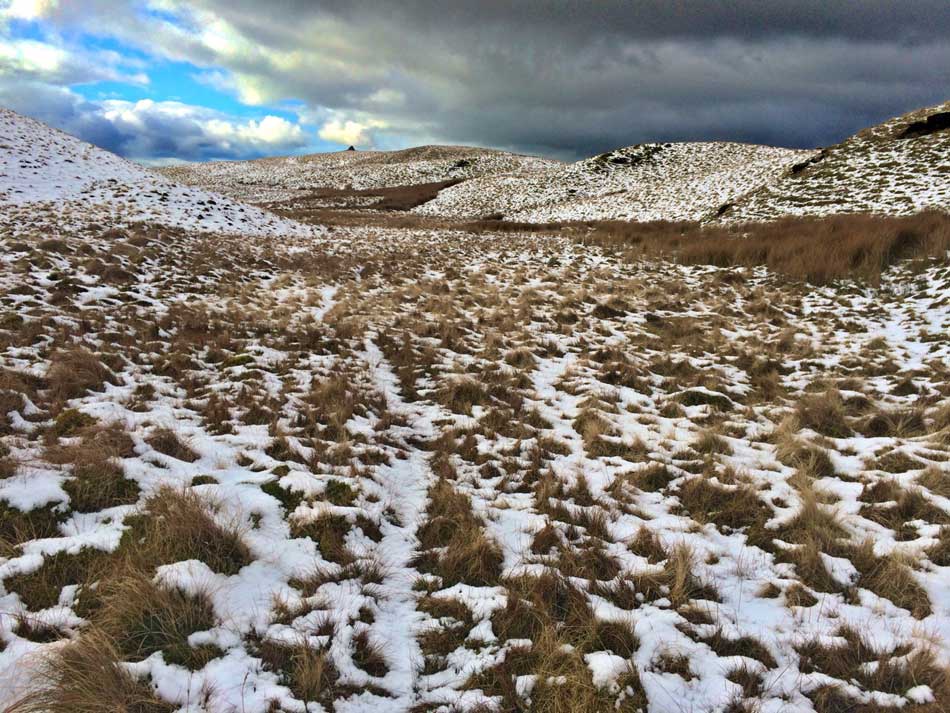 I made it to the summit where I was greeted by astounding 360º views. The hills to the east were looking amazing covered in snow, as was the Tarren Ridge to the north. The cairn itself was quite an ominous sight perched high on the hill with the wind howling around it, to the south and west, the hills fell away to the sea across rolling moorland with the occasional little farmhouse miles below me. Shafts of sunlight were shining out from between the clouds and illuminating the sea in the distance.

I pulled my phone out to take some panoramic photos as the views were stunning, but as I did so it crashed with a blue screen of death and started to reset itself. I waited for the phone to reset, getting fairly cold in the wind and the snow as I did so. I also noticed a huge dark cloud and band of snow approaching from the northeast. The phone reset but as I switched it to camera mode, it just shutdown again and wouldn’t start up. It had plenty of battery but up here in sub-zero conditions it just didn’t seem to want to work. Oh well, no more photos today I’m afraid.

By now, the snow had reached me and it was beginning to fall quite heavily. It was beginning to hamper visibility, so I quickly scanned the landscape for a suitable route off Moel y Llyn, down into the valley and back up to the summit of Moel y Garn. As I did so and the weather continued to close in, I decided that maybe Moel y Garn would have to wait for another day as this weather could prove troublesome. On top of which I didn’t think Id have time as the terrain looked quite challenging and Morgan was waiting at home for me. Also, without a phone, I wouldn’t have GPS coordinates for the geocache up there anyway so wouldn’t be able to find that either, nor would I be able to let anyone know where I was if I was taking longer than expected.

I quickly made some new plans, spotted what looked like a suitable route through the bog and small crags and took a quick bearing towards it. It was a good job I did as a few minutes later as I started what turned out to be a fairly cautious descent, the snow storm upped its intensity and I was unable to see much more than a few feet in front of me. I couldn’t see where I was going so would have to rely on my compass to keep me heading in the right direction. This, coupled with the steep, uneven terrain made my descent off Moel y Llyn a slow one. I was picking my way between the rocks, trying not to slip or trip and clambering over huge tussocks of grass and sinking into boggy ground. Not easy terrain to run on, especially in such conditions so I was once again down to a trot or a walk much of the time.

I eventually made my way to what had looked like a track from the summit, by which time the snow had stopped and I could see where I was going again. The track wasn’t exactly easy to run on either. Essentially it was a huge scar across the bog that had recently been ploughed by a tractor / digger of some sort. They’d just stripped off the top layer of grass, leaving a trail of destruction in their wake. It was easy to follow, but was composed of ankle deep mud in the best places and knee deep mud elsewhere. It was bound to lead to a proper track in the end though so I waded my way through it and did eventually join a proper track that took me exactly where I was supposed to be going.

I was quite tired by now though and still had a few miles to go so I continued to slog on towards familiar trails and the paths that I knew well into Cwm Clettwr. Even here the usually muddy trails were much muddier than usual. Running along them was once again difficult so there was no chance of making up for lost time, I just had to battle on through the mud making my way ever closer to the end of the trail and my waiting car.

I finally made it, and climbed into the car. The ‘run’ had been 10.8 miles in length but it had taken 2 hours 17 minutes. Pretty much what I’d expected, but I hadn’t expected it to be quite so tough.

Back at home Morgan was of course fine, so after a shower it was time for the usual chores, tidying up, cleaning, washing up, laundry, vacuuming and then a chance to bake some salted caramel chocolate brownies which soon had the house filled with a delicious smell. My legs are still sore, I have a headache and I could do with a snooze, but I’ve had another adventure out running in the hills and can’t wait for the next one.