From Nucleus to Hive

Just a quick update on our bees. Since installing our new honey bee colonies in the garden a few weeks ago, the weather hasn’t been great. There have been a few sunny days but the temperature hasn’t really risen much and activity has been slow. There have been bees coming and going and all seems fine but they could really do with a nice spell of decent weather.

We’ve checked on them a couple of times and have spotted the queen every time in each colony. There are eggs in some cells so she is laying and there have been larvae at all stages of development. Both colonies have some stores in the form of honey, although we have been feeding them as well just to give them a little help. The larger of the two colonies also had a decent amount of pollen stores when we checked earlier this week too. During this inspection it was also noted that this colony had quite a lot of sealed brood in it so hopefully the population will expand quite rapidly now and soon there will be a whole army of bees ready to set flight and forage for yet more nectar and pollen.

The smaller colony is a little behind with fewer bees, slightly lower stores and not so much in the way of brood. We have however now moved it from its nuc box into a full-size hive and at the same time gave them a few frames full of honey left over from last year. With this extra boost, extra room and decent weather promised from the weekend we’re hoping they’ll start building up pretty rapidly. Of course, as soon as they do we’ll have to be on our toes for signs of swarming, but so far so good on that front. 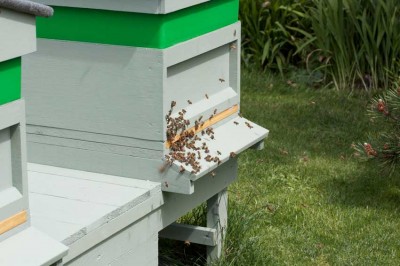