Well, the day had finally come, our last day in New Zealand – Boo!

It was an early start with breakfast in the camper. Well actually it was a double breakfast for me as I had one before the others got up and then another one once they were awake. We then took the camper around to the dump station and emptied our grey water and started preparing to leave. I returned a book I’d borrowed from the campsite owner and had a nice chat with her about trees, gardening and the differences between the UK and New Zealand and then it was off towards Auckland and the start of our journey home.

We had a little bit of ‘juggling’ to do in Auckland with suitcases, hotels and camper vans which we were going to do first and had then planned to visit the Auckland Botanic Gardens, but we were passing the gardens on the way into Auckland so stopped there first instead. The botanic gardens are lovely, entry is free and they have a wide range of different walks all beautifully planted with different themes. There are native endangered plants, cacti and succulents, a herb garden, an African garden, a kids garden, plants that grow well in Auckland and much much more. Even if you aren’t into plants or gardening then it’s all in a lovely parkland setting that is an ideal place to sit, relax and enjoy some green, vibrant scenery. 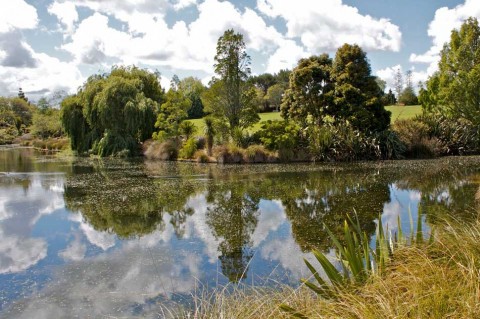 The lakes are lovely and some of them have eels in and the information boards dotted around the gardens are actually really good. Not all the plants were labelled though so it was sometimes a little difficult to know what was what but I guess part of that was just that everything was so unfamiliar. 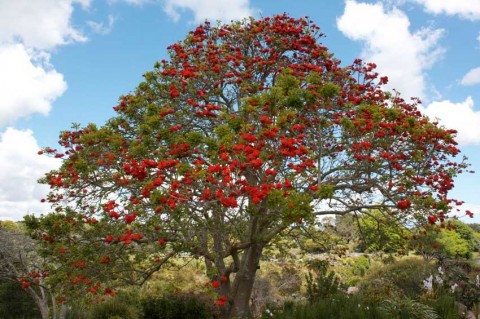 We stopped in the cafe for lunch and were pleasantly surprised to find that even that wasn’t too expensive. Better still, it was delicious and the carrot cake was the best yet. 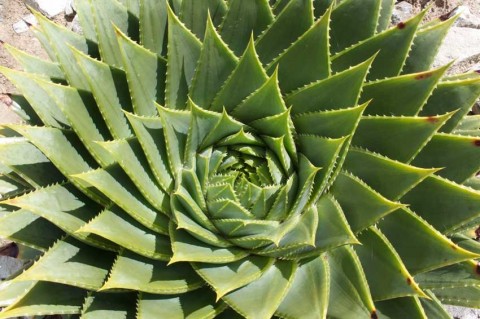 Morgan in and eggshell 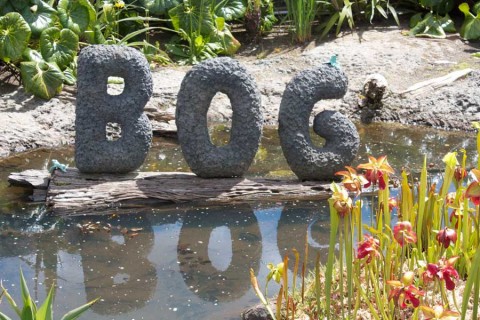 After lunch we left the gardens, filled the camper with petrol, joined the motorway and headed into central Auckland. Somehow, without knowing where we were going or which exit to take we took exactly the right one which brought us to within yards of where we wanted to be. We came out right by the Jucy Camper depot so it was just a short 2 minute drive from there along familiar roads to the Chifley Suites where my parents had been staying and my bike box had been stored.

We collected my parents luggage and my bike box and headed around the corner to the Rydges Hotel where we dropped of all of our luggage, all of my parents luggage and then packed my bike away into its box. There’s quite an art to this as I have to remove pedals, wheels, change skewers, remove the saddle and handlebars, take off the aero bars and then pack it all neatly and carefully into the box. A hotel foyer isn’t the ideal place to do it and I soon cut my fingers on the chainring, bled all over the floor and drew a crowd of onlookers. It didn’t take long though and my parents turned up while I was doing it so we left Morgan with them and drove over to the Jucy Camper Rentals to drop off the camper.

The guy who processed the camper was someone we had chatted to before and he was wearing on of the Jucy World Champs Triathlon ‘T’-shirts that we liked. He had mentioned getting one for us so we asked him again but they didn’t have any left. He did however arrnage for us to pop into the Jucy Hotel and have a chat with them. This is exactly what we did although the whole process of getting a free ‘T’-shirt did involve lots of photos wearing Jucy paraphernalia with some very enthusiastic Jucy staff! They only had a ladies ‘T’-shirt as well.

Anna and I then walked back to the hotel and met up with the others before having a final stroll down along the waterfront and dinner in one of the shopping centres in Auckland. We then did some final shopping for sweets and chocolates before going back to the hotel for coffee and a wait for our pickup to take us to the airport. Our pickup was due at 9:45 to get us to the airport for a 10:30 check-in so that we could leave on the 1:15 am flight the next day – No sleep for us then. However, whilst waiting we heard that the flight had been postponed until 4:45am, so we would have lots of waiting around in the airport to look forward to.

Once at the airport we met Graham, Sharon and Charlie and had a chat, catching up on the things we had all been doing in New Zealand. We’d been to similar places but at slightly different times. They seemed to have had a very different experience to us though. They didn’t like their camper, which was exactly the same as our, whereas we loved ours. They said they didn’t have enough room in it and there was nowhere to store their bike, they also said it wouldn’t go over 80km/h whereas ours easily trundled* along at 100-120km/h without even trying. They’d had an earthquake, were robbed and burgled and felt uncomfortable in places due to gangs of unruly youths everywhere – not a feeling we’d had anywhere that we had been.

* ‘Trundled’ was one of the words of the holiday due to the fact that New Zealanders call their shopping trolleys ‘trundlers’, a term that we quite liked.

Our flight had indeed been postponed so we did have a very long wait in the airport departures lounge but checking-in was easy and straight forward. It was for us anyway, Graham and Sharon had lots of problems again and ended up having to throw lots of their luggage in the bin in order to get within the allowances. We were also given some vouchers to use for food and drinks due to the delay.

We eventually boarded the plane and set off at around 5.30am, having not slept since the previous morning. The food on the plane was tasty again but it did feel a little cramped this time and after 12 hours on the plane it felt good to be getting off in Malaysia. Our original flight had been due in 4 hours earlier which was then going to be followed by a 2 hour stopover in Kuala Lumpur and a final flight to London. We had therefore assumed that we had missed the connecting flight and would now have to wait for the next one, possibly with an overnight stay in the hotel courtesy of the airline and complimentary meals and drinks. After a cramped 12 hour flight this sounded ideal. However, as soon as we were off the plane there was someone from Malaysia Airlines ushering into the terminal and straight onto another plane. They had held the flight to London for us so there was no stopover, just a mad dash a few hundreds yards down the terminal and straight onto another plane. Just what we needed after 12 hours in a plane, another 13 hours without a break!

It actually turned out OK though. This flight was pretty quiet so once airborne we were able to move around and choose whichever seats we wanted. Hurrah, at last, a window seat for me and room to stretch out. There was also plenty in the way of drinks and food with as much free beer and wine as we wanted. Anna slept much of the way and Morgan managed to get a few hours sleep as well whereas I spent most of the time looking out the window watching the world go by. The mountains and rock formations over Afghanistan are amazing as are the valleys that drain into the Caspian Sea.

Finally we were back in Heathrow, just as it was getting dark. Thanks to flying across timezones and the fact that the clocks had gone back in the UK, after 25 hours of flying, it was now only 12 hours after we’d left New Zealand. I hadn’t slept for at least 48 hours and now had to get to through customs and immigration, get to Purple Parking to collect my car and drive everyone back to Bristol. The car needed petrol, I needed coffee so we stopped at services partway home and eventually got back to my parents at around 8:30 pm. Time to eat cake, show my sister’s family some photos and go to bed. Our trip to New Zealand was over.