After spending the night in the car park of my parents holiday apartment in Taupo we had a leisurely breakfast with them and then set off to be tourists in the town. We wandered along the lake-front and then around the various souvenir shops where we bought ourselves some nice hand-crafted coasters made from native New Zealand Rimu timber and bought some presents too.

Morgan has a thing about crazy golf at the moment so we had a quick round in the course on the lake front and watched the ‘Hole in One Challenge’ for a little bit. The crazy golf course was nicely planted with flowering shrubs. As elsewhere in New Zealand these were absolutely covered in honey bees. After a lazy morning in Taupo we collected the camper and started our journey North.

As we drove out of Taupo we saw a sign for the Wairakei Thermal Valley and were also lurred in that direction by the promise of Devonshire Teas and tasty treats! We decided to have a little look and came across a delightful little campsite at the end of a gravel track. There were hens and guniea fowl scrabbling at the ground, llamas relaxing in the shade and the sound of peacocks in the air. It looked like a really nice place to camp – if only we’d known about it when we first came to Taupo. There was also a tea-shop, gift shop and a little walk that you could go on around the thermal area. We headed off on the walk (for which there was a small charge) but we were given a map and a digital laser thermometer so that we could see how hot the steaming rocks were. As we headed out through the secret door to the walk we were greeted by a tiny little pot-bellied pig.

Apparently the area used to have around 22 geysers but water levels were lowered when the area was tapped for geothermal power supplies and the geysers stopped ‘geysering’. There were still plenty of steaming rocks though just like at Craters of the Moon and we could get a little closer to them here as well. Morgan liked the thermometer and it did add an extra dimension to the walk. Most of the steaming rocks were in the 70-90°C range, but we did find some little vents that were much hotter, including one at 95.8°C. The area had plenty of steaming vents, mineral stained rocks and of course unusual vegetation that is only found near such geothermal activity.

Before leaving for New Zealand I had researched various campsites that we could stay in. So far on most nights we had stayed in the ones we had planned, but we had been flexible and had changed the plans now and then. The one we were heading for tonight was one of the ones I had been looking forward to most. Of course it’s always difficult to tell what it will be like before you get there but on paper this sounded like one of the best. It wasn’t too far from Taupo either, just a 45 minute drive north. Usually we wouldn’t arrive at a campsite too early in the day, but hopefully this one was a little different as the camping fee of $45 also gave you free acceess to a series of thermal pools. Our plan therefore was to head there after a picnic lunch and spend the afternoon relaxing in the pools – assuming that was, that we liked the look of it as the other thermal pools we had seen so far hadn’t really impressed.

As we approached the campsite we could see steam rising all along the valley. At first Anna thought there was some sort of factory at the bottom of the valley but as we approached it was clear that there was a boiling river running through the hills. The campsite looked good and seeing as entry to the thermal pools alone was $14 per adult, the $18 per adult camping fee was fine. We booked in, set up camp in a grassy area besides the boiling river and went to explore the pools. 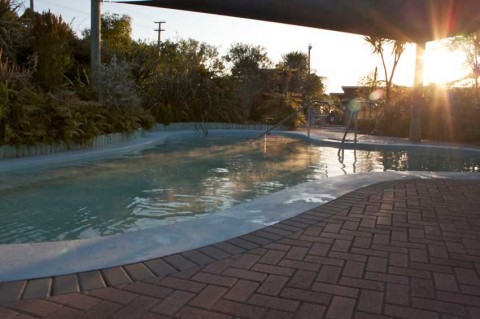 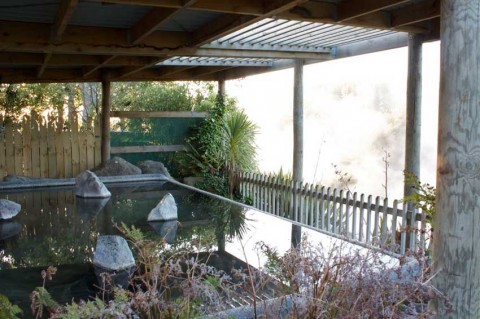 Although the pools themselves are completely manmade and unnatural, they had a much more natural feel than the previous ones we had seen. The large pool was just a rectangular swimming pool with an additional rectangular ‘slopey’ bit added to it. There was also two smaller pools with natural rocks in them and waterlevel edges that fell off into the valley vegetation. In addition there was two smaller plunge pools and a large shaped pool with a little waterfall. The whole complex was planted nicely with native vegetation and sat well in the valley. Most of the pools had sun-shades over them and the felt secluded and private. The whole place had a relaxing, calming and slightly decadent feel about it. Despite the fact that there were a few other people in the pools it never felt crowded, it was always quiet and peaceful and we often had a pool to ourselves. They have several ‘private pools’ too but we didn’t use those. 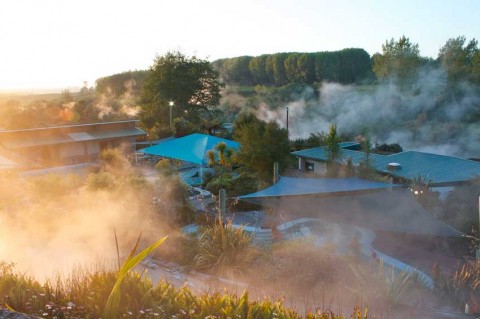 The main pool was at a temperature of around 37°C, too hot for swimming in but nice for just chilling and Morgan had fun practising his strokes in here. The two smaller ‘natural’ pools were at around 39°C and the larger shaped pool was the hottest of them all at around 41°C – too hot to linger in for too long, but lovely for a late night or early morning soak. The whole complex was in a lush green valley and all three of us enjoyed relaxing in the pools and felt calm, relaxed and chilled whist here. Phew, the campsite and pools had lived up to expectations. 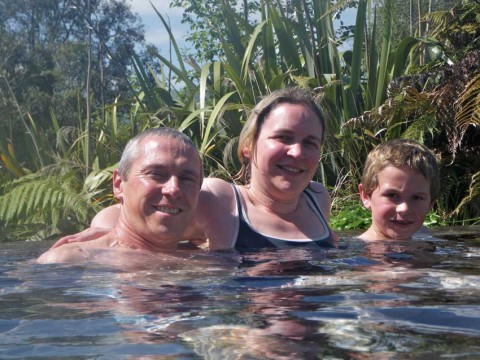 Relaxing in the Pools

As well as the pools, the campsite had all of the usual facilities such as a kitchen, laundry, toilets and showers and best of all a drying room which was powered by a radiator filled with water from the hot river. The pools complex which we had free reign of also had a cafe with some delicious looking cakes!

After a soak in the pools we were far too relaxed to start cooking in the camper so had a dinner of Nachos-to-share from the cafe, ice cream and the best carrot cake so far. It wasn’t a small piece either! Waikite Pools and Campsite was getting better all the time.

We then went for a little stroll along the ‘Eco Trail’ which is a small walk along the valley within the pools complex. The boiling Otamakokore River here is amazing, easily one of the more impressive geothermal features we saw whilst in New Zealand. The water comes from the Te Manaroa (Mana = Charismatic, Roa = Long Lasting) Spring which emerges into a large pool within the valley. The water here is around 98°C and the river then flows down the valley for about 3 km cooling to around 60°C before it merges with the a larger, cold water stream. The spring discharges water at 40-50 litres per second, the largest discharge of boiling water in New Zealand. 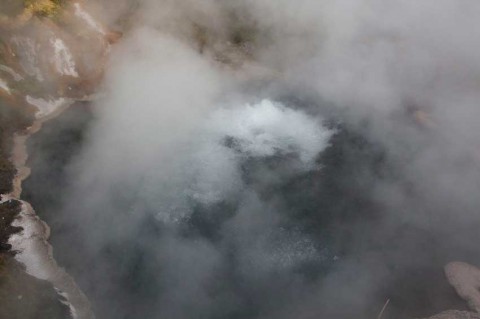 Some of the water is collected for use in the thermal pools, but it is cooled first by circulating it through little fountains and over shallow rivulets to get it to a useable temperature. Walking through this enchanting valley along the little river is well worth doing, even if the trail is only short. The vegetation is lush and you can barely see the water through the steam. Every now and then, when the breeze clears the steam, you do glance a view of the river but it is only a short glimpse of the boiling water as it gurgles downstream. The whole thing and the pools complex themselves are particularly nice thanks to the quiet, secluded valley in which they sit.

I quite like the photos of the riverbank . They look like aerial photos of a tropical coastline – the mineral deposits around the waters edge look like waves crashing against a rocky shore and the lush vegetation of the riverbank look like steep sided islands covered in rainforest, all shrouded in thick, moisture laden clouds. 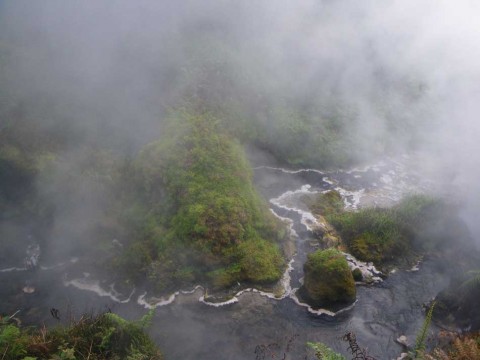 River Bank or Coastline from the Air?

The sun was setting, it’s rays were filtering through the trees and steam, we were in a paradise setting and all was good. 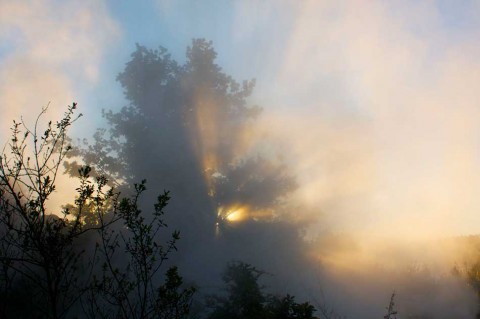 After a bit of a crazy, action packed couple of weeks, first in Auckland for the Triathlon World Championships and then driving around North Island packing in as much as we possibly could, it was nice to slow down the pace, and chill for a change. It’s not the sort of thing I normally do but we all needed a chance to relax, recharge and revitalise whilst enjoying some family time together with nothing to do but soak it all in.