Wednesday started as most days in the camper had with a big breakfast, we then packed up, didn’t really make use of any of the facilities at the campsite and headed off to my parents apartment for coffee and a day out with them.

The day before we had left the camper on the road outside the apartments. As you’ve seen, it isn’t the most discrete of campers in its bright purple and green Jucy livery and as we got in it we were asked by staff at the apartments if we were staying in it there. We told them we weren’t and had just parked it there for the day and they said we could have parked it in their car park. At the time we had assumed they were just checking that we weren’t about to camp outside their apartments and had meant that we could put it in their car park during the day so that it didn’t stick out like a sore thumb in front of their building. It turns out that isn’t what they meant and they were just being nice by saying that seeing as my parents were staying in the apartments we could have parked in their car park for the night for free. It wouldn’t have been any use to us really as we had already paid for the Great Lake Campsite but it did give us the option of staying there that night and it meant we could use some of the facilities in my parents apartment too. They even said we could use the pool as well if we wanted.

The apartment staff had also suggested a boat trip on the lake so we enquired some more about that and booked tickets for later that afternoon. We then set off first to show my parents a quick view of Huka Falls and then on to ‘Craters of the Moon’.

Craters of the Moon Thermal Area

Craters of the Moon Thermal Area (or Karapiti in MÄori language) is a region of geothermal activity just north of Taupo. It is a part of Wairakei, the largest geothermal field in New Zealand. There is a small visitor centre and an admission fee that allows you to walk around a series of boardwalks and get a good view of the craters, each of which have steam emanating from them. Its a strange and wonderful setting. A little bleak in places and almost alien as the steam rises from the rocks, hence its name. There are a few pools of bubbling mud or water but when we were there most of the craters were fairly dry with steam rising from the rocks which had been stained various colours by the minerals. The whole area has a desolate, other worldly appearance. 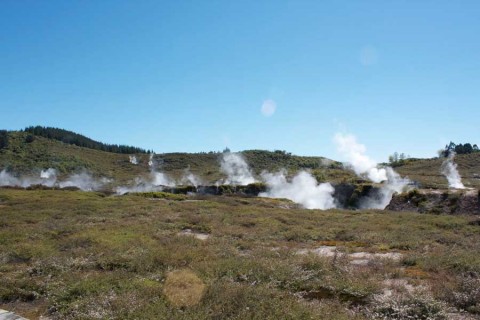 Craters of the Moon

Craters of the Moon

Anna & Morgan at Craters of the Moon

Whilst wandered around the boardwalk we also did a geocache. It was actually an Earth Cache that involved answering various questions, all of which could be found on the information boards dotted around the park. We then had an ice cream before heading off to our next stop, the Huka Honey Farm

The Huka Honey Farm is really just a glorified honey shop with an observation hive and a little coffee shop. It did have some lovely honey for tasting though and plenty of honey drinks too. The coffee shop also sold lots of delicious honey based cakes and honey ice-creams and smoothies too. We tried the various honeys and especially liked some of the Manuka Honey and the ginger infused honey. The Lemon, Honey and Ginger drinks were nice as well.

We did buy a jar in the end, had coffee and cakes in the cafe and spotted the queen in the observation hive. We had a chat with the ladies in the shop as well but they didn’t really seem that knowledgeable about bee-keeping in New Zealand and weren’t really listening when we told them we kept bees, so we left them to their stacking of the shelves with jars of honey products and continued on our way.

Morgan and my Dad as Bees

Anna and Morgan as Honey Bees

It was now time for our boat cruise around Lake Taupo with Chris Jolly Tours onboard the Cruise Cat. We drove to the harbour where the waters of Lake Taupo flow into the Waikato River and boarded the Cruise Cat. The waters here were crystal clear and with the midday sun sparkling on the lake it looked like a perfect day for a boat trip. 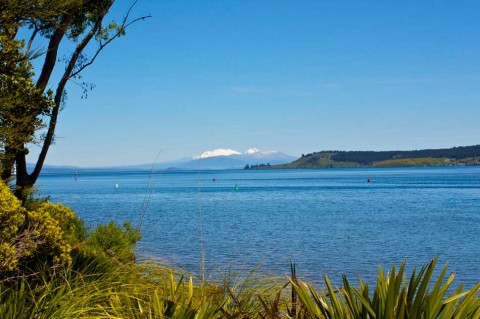 The trip took us out of the Waikato river, past seaplanes at their moorings and along the coastline of Tapaeharuru Bay, along Two Mile, Three Mile and Four Mile Bay, passing various parts of Taupo. There was a running commentary on various aspects of the lake, its history and of the town and the cultural significance of certain features. It was surprisingly interesting for such commentary and not at all annoying as these things can often be. 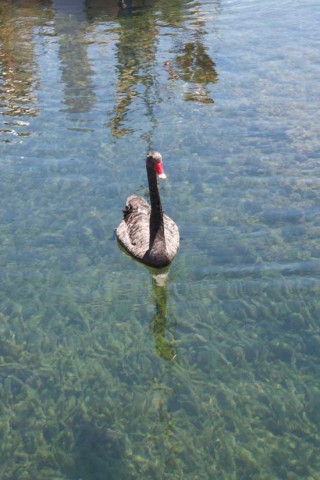 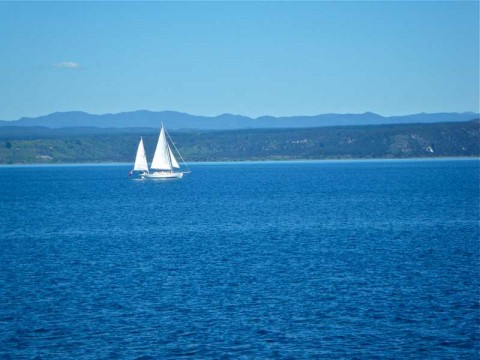 We then sailed across the mouth of the bay from where we could see the size of Lake Taupo towards the Maori Rock Carvings on the cliffs of Mine Bay.  These recent carvings are over 10 metres high and are only accessible from the water. They were carved in the late 1970s by master carver Matahi Whakataka-Brightwell in likeness of Ngatoroirangi, a navigator who, according to MÄori legend guided the Tuwharetoa and Te Arawa tribes to the Taupo area over a thousand years ago. 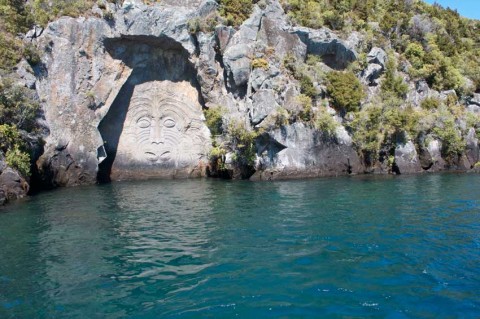 Anna & Morgan with the Maori Carvings 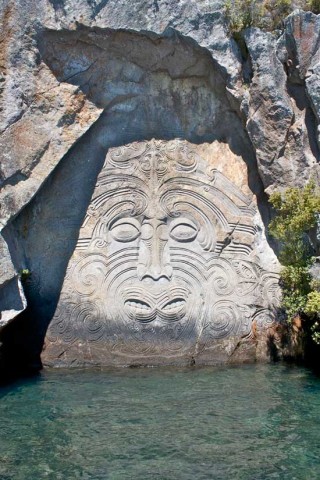 The boat stopped here for a while so that we could take photos before returning along the western coast of Tapaeharuru Bay. During this time we were all treated to free coffees, hot chocolates and hot muffins on board the boat and Morgan had chance to pilot the boat himself. The crew (of two) were very friendly and as you can see from the photos Morgan loved the chance to drive the boat. He even got presented with a nice ‘Wheel Certificate’ too. Again, it was nice to be here early in the season as it meant Morgan was the only child onboard – I can only assume there is a little queue of ‘captains’ waiting to steer the boat during the peak season. 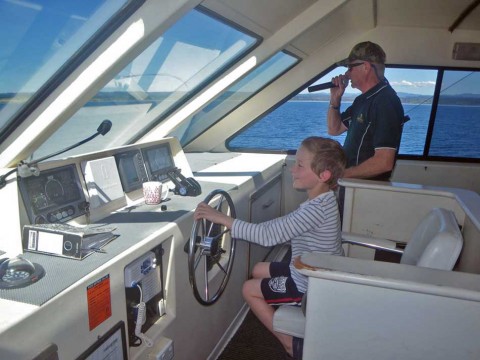 Morgan at the Helm

Morgan at the Helm

After about 1hour and 30 minutes the cruise was over, just the right length and we now had time to revisit the Hot Water River.

We then all went to the hot water river again for another soak in the thermal pools. My parents hadn’t been before but seemed to enjoy it and we all had a relaxing time in the water whilst basking in the glorious sunshine. I of course jumped off the bridge again.

Mum & Dad under a hot waterfall

As with pretty much everywhere else we had been we bumped into some Triathletes here. This time from Team USA but they hadn’t done as well in the race as they had hoped though and didn’t really want to talk about it. The Triathlon seems to have been really good for the New Zealand tourist industry. It seems that most of the overseas competitors have stayed on for a couple of weeks or more after the race to tour around the island just as we had. I guess it’s a long way to come just for a race so it makes sense to explore the island as well. In fact, I’m quite hoping that I manage to qualify for the event in future years as it’s a great excuse for a holiday and a good reason to go to some countries that I might not otherwise have thoughi of going to – its just a shame that it is in London next year and not somewhere exotic like Mexico or Malaysia.

Following our soak in the hot waters of the river we headed back to Taupo and my parents apartments, with a stop at the Countdown supermarket for supplies for dinner. I then went for a nice mile long swim in the clear blue waters of Lake Taupo and we had a home-cooked dinner of fish, various kumaras (the New Zealand word for Sweet Potatoes) and roasted veg. 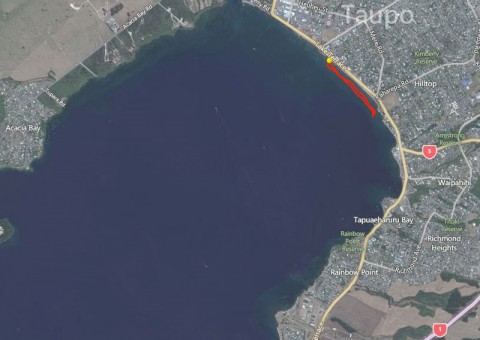 We then spent the night in the camper van camped in the car park of my parents apartments.