It’s Monday and we are still having the holiday of a lifetime in New Zealand. We awake to a damp drizzly day in Otorohanga, have a shower and breakfast in Camp Kiwi and then take the 30 second walk to the Kiwi House.

We are the first ones in and are treated to a good view of the Kiwi in their nocturnal house. We also wander around the entire park admiring the various native birds and finding out a little about them. The weather isn’t great and doesn’t really make for good photos but that doesn’t seem to matter and was well as birds there are a few reptiles too, Tuatara and some Geckos. 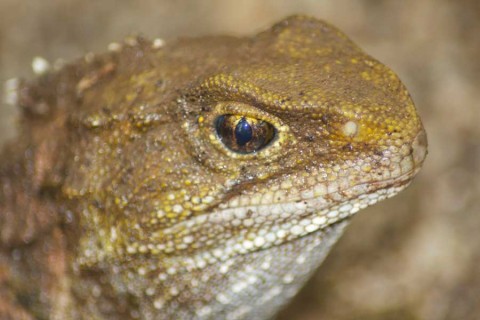 The New Zealand Pigeon or kererÅ« is a bird endemic to New Zealand. MÄori call it KererÅ« in most of the country but kÅ«kupa and kÅ«kÅ« in some parts of the North Island, particularly in Northland. We’d seen quite a few of these around and apparently they are really important for some of the native large trees as they are the only birds able to eat the large seeds and distribute them around the forest.

PÅ«keko is the common name, derived from the MÄori language, for the Purple Swamphen of New Zealand. It is one of the few New Zealand native birds to have flourished since the arrival of man, and can be found in almost any grassland area, especially in swampy locations. Anna was quite fond of these. 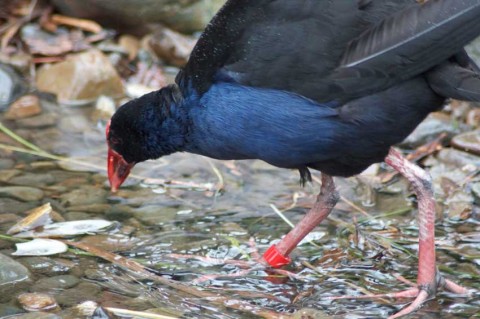 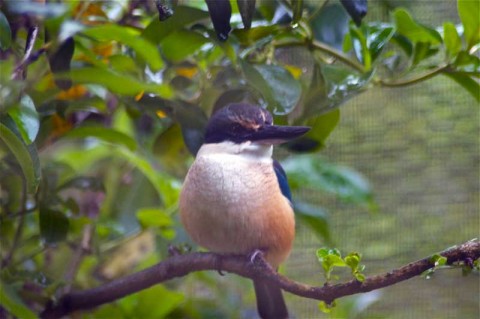 Whilst at the Kiwi House Anna also tried to explain to Morgan how sundials work – Although trying to do so in the rain when there is no sun and no shadow doesn’t really work! 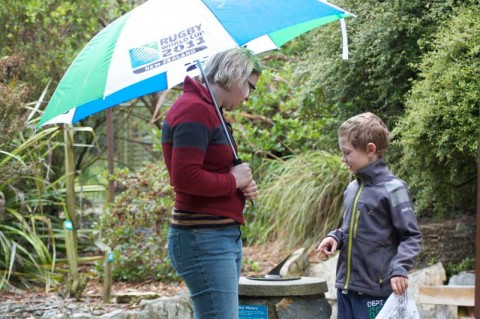 Sundial in the Rain

It was then back to the camper and we set off to the nearby Waitomo Caves. We stopped en route for a little roadside geocache and by the time we arrive at Waitomo some 15 minutes later the weather has changed completely. It is now full on blue skies and getting very hot. We slap on some sun cream despite the fact that we’ll soon be heading underground and head to the ticket desk. The Waitomo Valley is full of visitor attractions and there are several caves dotted along it. Each one seems to be serviced by a company offering tours, from sedate boat trips through black-water rafting and full on abseil descents into the caves. The rafting and abseil ones look really good but there is a lower age-limit of 12 or 15 on them so Morgan couldn’t do them, Anna wouldn’t be so keen on them and they are all very expensive. Some take most of the day as well so instead we go for the slightly less-expensive and altogether more sedate glow-worm cave with a little boat trip. We weren’t allowed to take photos inside the cave, so here’s one as we got off the boat at the cave exit. 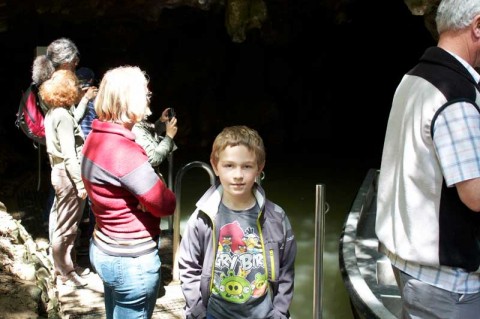 The word Waitomo comes from the MÄori language wai meaning water and tomo meaning a sinkhole; it can thus be translated to be water passing through a hole. These Caves are believed to be over two million years old. The main caves in the area are the Waitomo Glowworm Cave, Ruakuri Cave, Aranui Cave and Gardner’s Gut. They are noted for their stalactite and stalagmite formations, and for the presence of glowworms (the fungus gnat Arachnocampa luminosa). The glowworms were indeed a sight to behold and the whole cave complex was good to see, even if it is all a little commercial and touristy.

We had a delicious lunch at the cave centre, both the savoury dishes and puddings were very nice indeed. We then took a little stroll into the forest on the other side of the road to find a cache camouflaged as a mushroom. 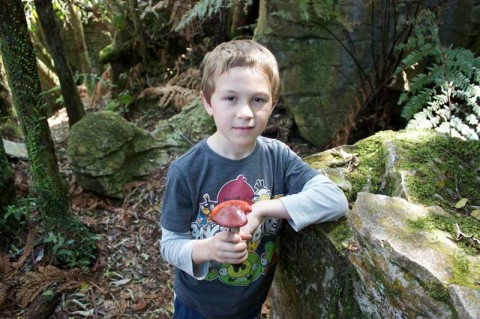 The landscape here looked lovely bathed in sunlight and the ferns of the forest were very photogenic too, especially the ‘koru’  which is the MÄori word for “loop” that is used for the shape of a new unfurling silver fern frond. The spiral shape is used in  MÄori culture to symbolise new life, growth, strength and peace. The circular shape of the koru helps to convey the idea of perpetual movement while the inner coil suggests a return to the point of origin. 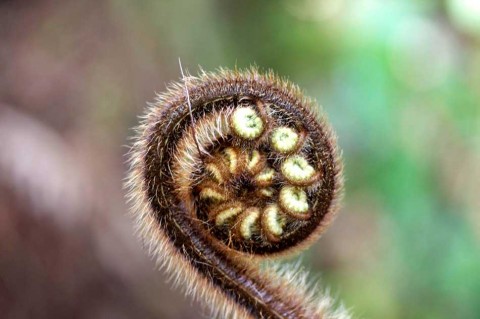 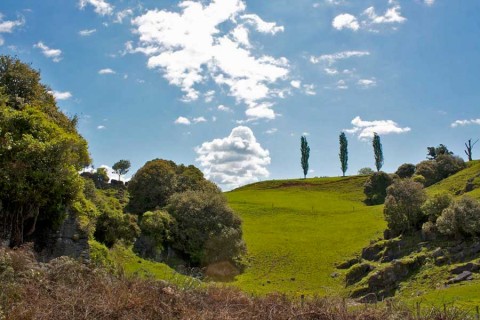 I’m not sure Morgans attempt at camouflage was that good though, although it should be noted that Morgan has now washed and no longer has a Union Jack tattoo on his face! 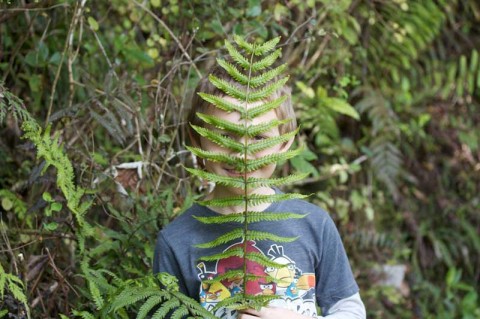 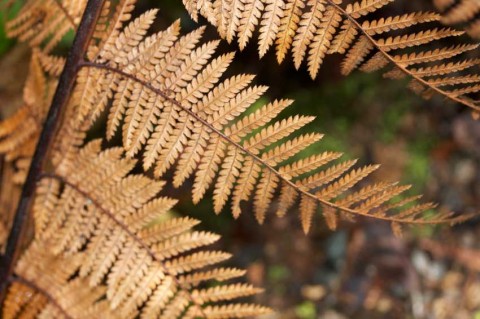 With the Waitomo area explored and the caves seen it was now time for a drive across country and our furthest point south on the trip – The Tongariro National Park and the campsite at Whakapapa village on the slopes of Mount Ruapehu. 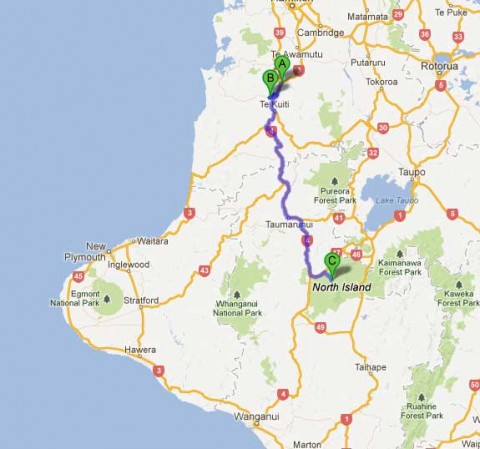 The drive was once again fairly uneventful until we approached the Tongariro National Park. Before us we could see the snow-capped mountain of Mount Ruapehu. I’d told Morgan we were heading for the mountains but I don’t think he was quite expecting such an impressive looking peak. The snow on the top really finished it off and the approach to the campsite at Whakapapa was quite exciting as we drove higher and higher up the mountain. We stopped a couple of times for photos before we arrived.

After signing in at the campsite we took a quick drive up ‘The Bruce’ – the road leading to the ski-chalets and ski-lifts at the base of the snow fields. The landscape here is barren and although we couldn’t quite make it by road to the snowline proper there were still some pockets of dirty snow about at this altitude. Unfortunately we were in between seasons. The ski season had finished, but it wasn’t quite summer, so the ski-lifts weren’t running. That meant that I had no real way of making it to the summit whilst in the area so there would be no mountaineering for me tomorrow. Still, we had some nice views out across the National Park from here before retunring to the campsite for a dinner of leftover cheese and beef pie with sweetcorn and salad.

Panoramic View from The Bruce

The campsite itself was a little different to the others and catered mainly for walkers and mountain people. It was the biggest camp so far and each camper had it’s own little area separated from the others by trees. There was a very large communal kitchen and large toilets and shower blocks too. There was a laundry and onsite shop, picnic areas, trampoline and cabins that you could rent. It was a little pricey at $49 for the night but that is to be expected from such a well-appointed campsite in a unique position. 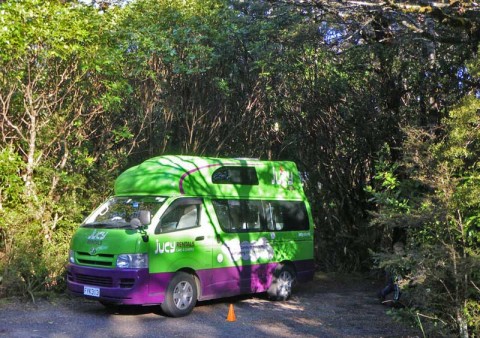 After setting up camp we went for a little stroll along a nature trail and down to the Whakapapnui River as dusk fell. I also found another new moth in the toilet block along with some more Cabbage Tree Moths! I’m not sure what species this is though.