After our now customary breakfast of muesli with yoghurt, several cups of coffee and toast with New Zealand Manuka honey it was time for a quick shower in the campsite and then off towards Bridal Veil Falls near Raglan. We had planned to check out the surf at Raglan which is probably the most famous of all New Zealand surf spots, but seeing as I’d spent the day before surfing we decided to miss it out of the itinerary. Instead we thought we’d visit Bridal Veil Falls and then return back to the hot springs on the beach near Kawhia. We borrowed spades from the campsite and set off towards Raglan.

The Twisty Road to Raglan

I’d seen the road to Raglan yesterday as we approached Kawhia and saw that it was another gravel road. These are always interesting to drive along so I was looking forward to it. And what a road it is, 30 miles or so of twisting, winding, dusty gravel track cutting through the middle of the forest and skirting the Aotea Harbour. The drive itself was exciting and the scenery spectacular as we forged through the forest without seeing another car for miles. We passed yet more beehives and plenty of lovely looking secluded picnic spots and eventually came to the turning for Bridal Veil Falls. Unfortunately the road was closed so we had to continue along the gravel road almost all the way to Raglan where we could join the Main Highway 23 for a short while before turning off onto another road to the falls themselves. Here’s a short section of the road to show you how twisty it was along with some photos along the way. 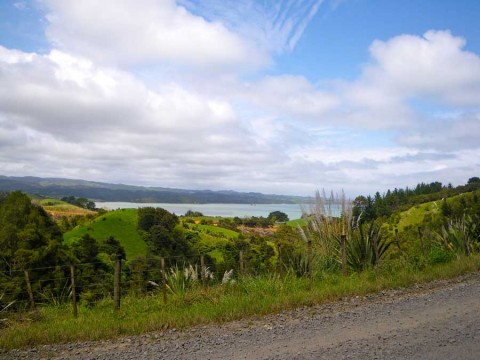 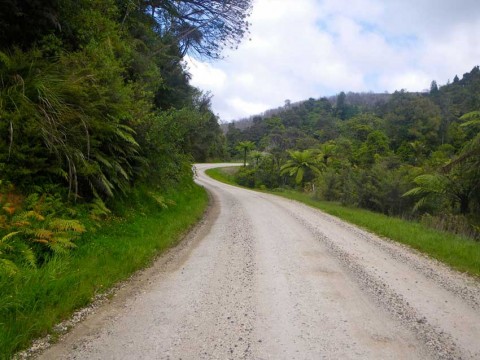 The Road to Raglan 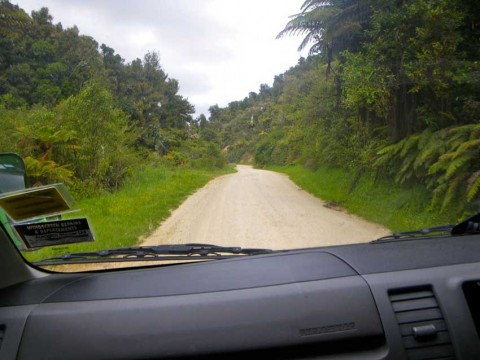 The Road to Raglan

There were a number of people parked at the falls so we joined them and set off on a short walk first to the top of the falls and then down to the bottom for some good views of the waterfall. Located along the Pakoka River, Bridal Veil Falls is 55m high and has formed a large plunge pool in the soft sandstone at its base whilst the harder basalt over which it flows forms a vertical cliff behind it. Despite the impressive nature of the waterfall there isn’t actually much water flowing over it and the stream leaving the plunge pool was quite small. 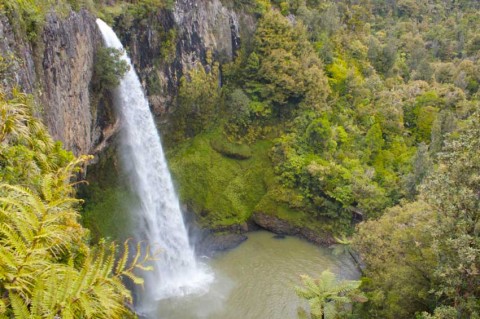 Bridal Veil Falls from the Top 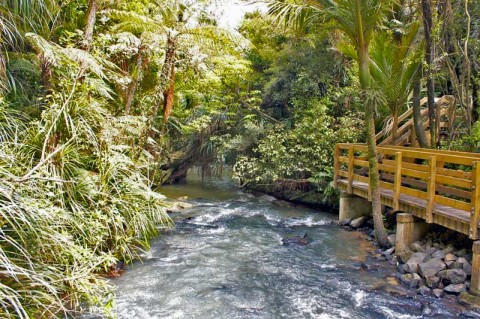 There was no short way back to Kawhia so we retraced our tracks along the crazy gravel road again and then drove through Kawhia and along the short distance to the beach. We pulled up under the shade of the pine trees in the lee of the dunes, got into our swimming kit and started walking up the black sand of the dunes.

The dunes were much bigger than I had expected and the sands were far too hot to stand on in the blazing sun… We made a quick retreat to the camper to get some shoes and tried again. This time, as we crested the huge dunes we were greeted with a wild, exposed, and very large beach with ocean waves rolling onto it. We were also greeted with a cold, cold wind blowing in off the Tasman Sea. There were people fishing along the shore as we made our way down to the waters edge and started feeling around with our toes for some hot water. We’d been given inside info from the locals – the campsite owner – so knew where to feel, but all we could find was cold water. We decided that maybe we were a little too early so had to wait for the tide to drop a little so it was back to the camper for a picnic lunch before we tried again.

This time we were – after a while – successful. We found some warm areas under the sand and dug down with our spades to find some hot water. At around 4o°C it was nowhere near as warm as the water at Hot Water Beach, but it was warm so we dug some pools and tried to find the hottest part of the spring. The waves rolling into the beach didn’t help matters though as they kept swamping our pools and the cold wind and grey sands didn’t really make it feel like a beach day. Morgan of course stripped off and sat in a pool for a while though whilst Anna and I tried to keep warm in the cold winds. 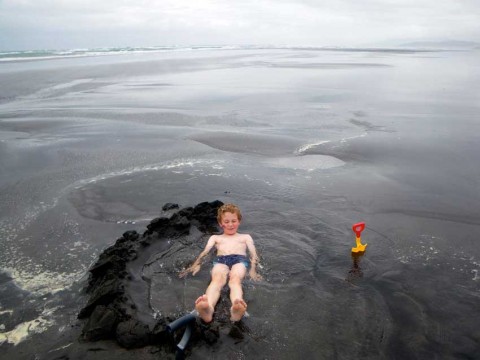 After a while we returned to the camper and the warmth provided by the protection of the dunes then returned the spades to the campsite before heading off towards central North Island. Morgan really wanted to see a Kiwi and we wanted to visit the Waitomo Glowworm Caves so our next stop was Otorohanga for the night. 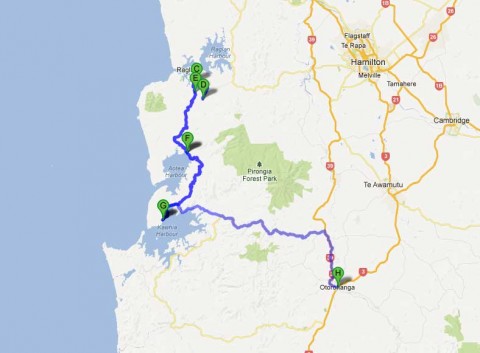 The drive to Otorohanga was fairly short and easy and we pulled up to Camp Kiwi right next to the Kiwi house in time for dinner. The camp was only small and not much of a campsite really but it was more than convenient for the Kiwi House, had toilets showers and a kitchen and was nice and clean and tidy. It cost $29 for the night without an electirc hook-up as we didn’t really need it and we got 10% discount at the Kiwi House for staying there.

Camping at the Kiwi House

Dinner consisted of burgers and sausages followed by Cookie Time cookies. We’d heard about these before travelling out so had to give them a go. They were certainly nice, especially warmed in the microwave, but they weren’t really anything special.