Star Gazing in Wales with Morgan

At last, we’ve had a couple of clear nights, the first since Xmas, so we’ve been able to get our new telescope out. Anna was out rehearsing and doing the pantomime with the Scouts, so it was just Morgan and me. We set the scope up under clear skies, but on the first day night it wasn’t before long clouds started rolling in and obscuring our view, but we persevered and got some good views in between the clouds. the next night it was the frost that beat us into a hasty retreat indoors, but we’ve still seen plenty of sights that we hadn’t seen before.

The Moon had yet to rise so the skies were dark and there was plenty to look at. We’re beginners at this, so I pointed out a few obvious things to Morgan such as the Plough in Ursa Major, and showed him how to find Polaris, the North Star, from it. Once we had that in our sights I then Polar Aligned the telescope using Polaris as a guide and we set about looking for a few more objects.

Jupiter is still one of the brightest objects in the sky. Venus is also visible so we tested out our aiming of the telescope on these easy targets first. We soon had them in our sights and once again could clearly see the banding of the cloud formations and the four Galilean Moons of Jupiter. At a higher magnification the rotation of the Earth meant that Jupiter only stayed in the field of view for a few seconds, so it was time to try out the motor drive on the telescope. 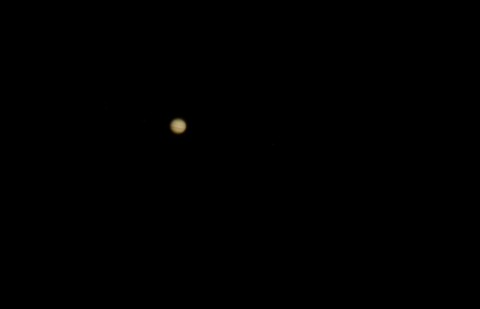 Morgan seemed to be enjoying the views through the telescope too and had brought out a note book and was busily drawing pictures of what he could see. If he carries on like that I’ll be referring to his notebook for reminders of what we were looking at when writing this blog!

We then decided to look for some ‘Deep Sky’ objects. First target was the Orion Nebula (M42, or NGC 1976). This is a nebula or area of star formation located just below the three stars that make up Orions Belt. I managed to point the telescope straight at it and could clearly see a cloudy, misty patch of light with several stars shining through it. I was pleased that Morgan was impressed with it, as I wasn’t really sure what he’d think. These days with easy acces to special effects on the TV and amazing astronomical photos of such things from Hubble it is easy to be underwhelmed by a small, faint, greyish misty patch through a telescope, but Morgan seemed to be excited.

What really makes these things exciting is the intellectual appreciation and understanding of what you are observing and the realisation that light from these objects have traveled incomprehensible distances across space before you get to see them in the eyepiece. The Orion Nebula is around 1,344 light years away and is the closest region of massive star formation to the Earth. It makes your mind boggle when you start thinking about these distances. Travelling anywhere for 1,344 years will get you quite far, but when you are travelling at the speed of light, a speed that we can’t even begin to imagine, then you really will have covered immense distances. The light from the Orion nebula has been travelling across the vastness of space for 1,344 years before Morgan and I captured it in our telescope and saw it. Amazing really! The nebula itself  is estimated to be 24 light years across and it has a mass of about 2000 times the mass of the Sun.

After looking at this for a while and talking about the distances etc. we had a look for the Andromeda Galaxy. This is further away still and is supposed to be the most ditant object that you can see with the naked eye. Unfortunately it eluded us, but we’ll be back to look again another day..

Next up was the Pleiades Cluster (M45). This is an open star cluster located in the constellation of  Taurus It is one of the nearest star clusters to Earth and is the cluster most obvious in the night sky. With the naked eye it is seen as a loose cluster of around 7 stars. Through the telescope many more were visible.

We did play around trying to do some astro-photography, but it isn’t easy and I haven’t really got to grips with it yet. There is plenty of time to learn and practise though. The best I managed was a wide view looking south with both Jupiter and the Pleiades Cluster in it, and the photo of Jupiter that you;ve seen above. Unfortunately I don’t have the budget that NASA have to get photos quote like those of the Orion Nebula and Pleiades Cluster!