We had another lovely clear night last night so once again it was time to get our new telescope out. I had to have a bit if help from Anna to carry it out as my back was still sore, but we all wrapped up warm and soon had the necessary equipment in the garden.

I spent some time polar aligning the telescope and then Anna and Morgan joined me for an hour of observing. Anna hadn’t really seen through the scope before so we gave her a little tour of what we’d look at before. Jupiter and its Gallilean Moons, the Pleiades Cluster, a few stars and of course the Orion  Nebula.

It was pretty cold out there and soon time for Morgan to go to bed, but I stayed out on my own and started my journey into the world of astro-photography. My plan for tonight was to try some piggyback astro-photography. This simply means that I mount my camera on top of the telescope, piggyback style, and take photos of the night sky through my normal camera lens. The telescope isn’t really used, but it’s mounting and motor drive are. The motor drive moves the telescope and therefore the camera at a rate of 15° per hour. If the mounting is properly polar aligned this movement compensates for the spin of the Earth and allows longer exposure photos to be taken without star trails developing.

Focussing is difficult as you can’t really see anything to focus on, but this isn’t supposed to be easy. I aimed the telescope at the Orion Nebula, set the camera up and realised there was nothing at all to focus on. So, I aimed it at Rigel, a bright star in the Orion consteallation and  focussed as best I could on that. I then repositioned the scope and camera and took a photo using my 60mm lens.

Now, the results aren’t spectacular, but I did managed to get some photos of M42 the Orion Nebula and was pleased to see some of the nebulosity and even some colour in the gas clouds. When looking through the telescope, these colours aren’t visible and all we can see is a faint, misty grey patch. I took a number of photos, experimenting mainly with focus, but also with different exposures lengths. Most exposures were in the range of 1-3 minutes at f2.8 – f3.5 and ISO 800. 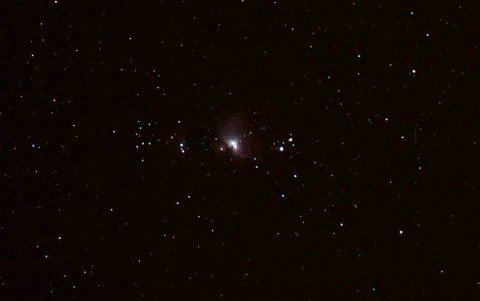 I’m fairly pleased with the results for a first attempt, but need some more practise at polar alignment and focussing as well as experimenting with different exposures. Next time I try I shall probably use my 300mm lens as well. This will give more magnification on the objects I’m trying to capture, but will also exaggerate any inaccuracies in my focussing and tracking abilities. At first this might lead to less satisfactory results but hopefully I’ll learn from it and improve my technique.

I also took a photo of the brighter stars in the Orion Constellation. It only just fits in the frame but you can clearly see; Orions Belt in the middle, Betelgeux – the orangey coloured star vat the top left, Bellatrix at the top right, Saiph – bottom left and the bright star Rigel in the bottom right of the photo. You can also see the Orion Nebula which represent Orions dagger hanging from his belt. 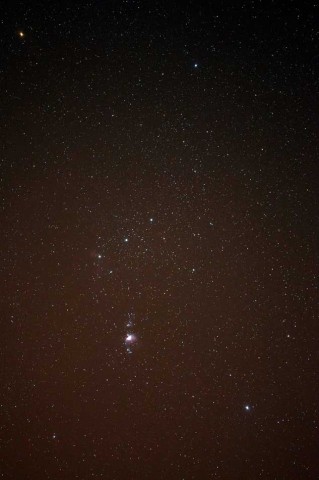 I know these photos don’t compare to what is possible, but we all have to start somewhere, and this is my starting point. I shall be out there again expermineting with different settings and techniques soon. I should also try taking a whole load of photos of the same object and then stack them in a software application such as deep sky stacker. This is designed to improve the signal to noise ratio and improve the image. However, before I do that I want to make sure that the images I’m capturing in the camera are as good as they can be.

After a couple of hours my hands were freezing and not so good at operating the various controls so it was time to pack up. I’d completed my first attempts at astro-photography. The results weren’t amazing but I was pleased to have captured something, and I’d had an enjoyable evening under the stars in Wales.