What a race that was!

I arrived at the Foxley estate to rain and what looked likely to be a very wet, very muddy day. Fortunately by about 10:30am the rain eased off so it wasn’t wet, but I was right about the mud!

I had my usual relaxed approach to getting ready. Arrive in plenty of time, sign on early and then chill in the van for a bit before heading out to ride around parts of the course. This was the third year I’d raced here at Foxley and it had always been very bumpy so I was toying with the idea of using my mountain bike rather than my cyclo-cross bike. I’ve thought about doing that a few times at various courses now, but have always stuck with my cyclo-cross bike. The thinking behind this was that I’m never going to be good at cyclo-cross and one of the reasons for doing it was to improve my bike-handling skills across the board. There’s no better way to improve bike-handling than riding a wholly inappropriate skinny tyred, drop handlebar bike around a technical, slippery, muddy course over and over again!

The bumpy grass here at Foxley did have me erring towards the use of my mountain bike this time though, more for comfort than anything else. It might not be the fastest option but it would help with the bumps, especially as I’ve been suffering with pins and needles in my left hand recently and I had a slightly sore back.

I still hadn’t made up my mind which bike to use as I headed out on my first recce lap on my cyclocross bike.

It didn’t take long for me to decide that maybe the mountain bike would be a better option! There was thick, slippery mud everywhere. The worst spots were where the mud was coating rocks or tarmac as I had no grip at all here. It was feet out time just to stay on. The rutted, gloopy mud at the end of the start straight as we passed the pond had me squirming around all over the place. The little drop after this was a case of hanging on and hoping for the best. The stream crossings were definite dismounts as the climbs back out of them were steep and slick. Just running up them was difficult. The grassy climb after this was a brief respite from the mud but it was soon back with a few tricky corners through gates and onto a very slippery rocky track coated in slippery slimy mud.

There was a new little hump on the course this year. The muddy hump itself was OK, but I just couldn’t get the hang of the 180º muddy turn immediately after it. We then left the mud behind for a bit for a grassy straight with two hurdles and then some grassy turns past the pits. Another dismount for a steep muddy stream crossing and it was onto the bumpy grassy curve around the back of the course. It was full power along here as the grass and bumps tried to slow you down. The transition from grass to tarmac is always tricky as the tarmac gets coated in a layer of slippery mud so caution was needed. It was then another muddy stream crossing that was at least rideable followed by a mad dash to the start / finish.

I only rode this part of the course in my initial recce’s and rode it slowly on my CX bike. I then did the same again on my mountain bike. It wasn’t any easier on that but it was more comfortable so I decided that was what I would use. There was also another section that was being used for the junior races that I couldn’t recce until just before our race. This came just after the finish line and consisted of a grassy drag up to the high point of the course, followed by a very bumpy grassy section, a little drop and then another bumpy grassy bend back onto the start straight.

With recce’s and final practise lap done it was time to line up for the start.

We were seeded based on last weeks results, so I lined up in about the fourth row with some familiar faces around me. The usual safety briefing and banter was exchanged and we were off. We didn’t do the grassy climb to the left of the course on the first lap so it was a mad dash along the long tarmac straight to the slippery pond section. I had quite a good start off the line and was going well, I’d made up quite a few places over the first hundred metres or so but my sprint start faded soon and I lost a few places again on the climb to the pond. Surprisingly everyone around me made it safely through the next tricky section and we soon settled into our places.

I may have some of the details wrong as things get pretty hectic in a Cross race and it’s difficult to remember the exact order of things or which lap they happen on, but Ant, who I’m often racing overtook me on one of the more technical sections on the first lap. I then overtook him along the bumpy grassy section, only for him to come back at me again later. We’re often racing each other in these races so it was good friendly competition with a few laughs and comments exchanged. I did overtake him again at some point and managed to put on a spurt to open out a gap.

I was surprised to find myself catching Richie at this stage. He is usually way ahead of me, but I was going well and closing in on him. I overtook him and then opened out a gap on him too. I was now racing with Paul and Michael who I knew by sight but had never raced against so didn’t know too well. They are usually a good few places ahead of me so I was determined to stay with them. We ended up having a really good battle. I’d tend to lose out to them through the more technical turny bits, but could sometimes pull away on the bumpy grassy sections. Sometimes they would open out a gap on a climb, other times I’d close them down here and there. If I could overtake them into a technical section I might hold them up a little through it, other times they would be ahead of me and the gap would increase.

It turned out to be a really good race with places swapping several times on a lap. I thought Paul had left me behind on lap four as he opened out quite a gap on the climb and would then open out more of one through the technical section. He dropped his chain though so I caught and overtook him only for him to overtake me again through the slippery turns. I was surprised and of course relieved to hear the bell. It had come much earlier than expected. I was still ahead of Richie which was a first for me. Ant was quite a way back and I wasn’t far behind Paul. If I could keep it that way I’d be happy, and with one lap to go it was time to push as hard as I could. I put on a mad spurt on the final lap, caught Paul once again and then overtook him along the bumpy grassy track. There wasn’t far to go now, so it was flat out for the final section trying to hold off a late challenge from Paul. I overtook a few back markers, dismounted for the final stream crossing as there was a bit of traffic here and then sprinted for the line. What a race!

The results aren’t out yet, I’ll add them here when they are, but I’m hoping for a decent placing. [EDIT: provisional results have me in 20th place – a good result for me]. I usually finish towards the bottom end of the first half of the pack. This is usually around 25-30th in the V40’s. Today I found myself racing with the likes of Richie, Paul and Michael who usually tend to finish about 10 places ahead of me. Maybe they were having bad days. Richie, who also opted for a mountain bike, didn’t seem happy with his performance, or his choice of bike and Paul did drop his chain a few times so they didn’t have the best of races. I made the right decision on bike for me. It was still super slippery and some sections were difficult but at speed it felt better than the practise laps and I was flying on certain sections. Maybe I’ll use the mountain bike more often. We all had a chat and laugh about the close contact racing after the finish line and then headed off to pack up.

Back at home after the 2 hour drive through a now sunny Welsh countryside it was time for lots of bike cleaning and laundry. How my drive-chain and wheels kept turning when encrusted with quite so much crud I’ll never know. It took a lot longer to clean my bikes and get them to a state where they were allowed back in the house than it did to get them in such a mess! 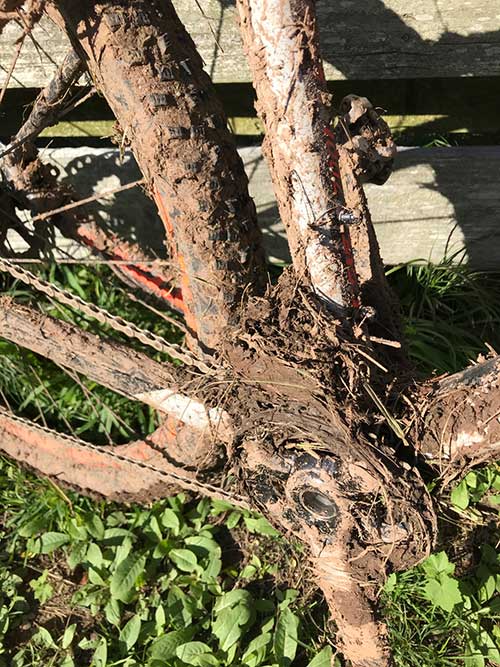 All in all though it was a great day out riding Cyclocross. A good, varied course, excellent organisation as usual, friendly competition, a good workout and plenty of mud!