Ask any road cyclist what the worst aspect of riding is and they will undoubtedly say: One, “The Traffic” and two “Bad road surfaces and potholes”.

Ask a Mountain Biker what the worst aspect of riding is and they’ll say: “Long hard slogs uphill on a heavy bike with knobbly tyres”

With this in mind I thought it was time for another new bike, so why not a cyclocross bike? Basically a cyclocross bike is a road bike that you can ride off road. It has drop bars and a lightweight, road style frame, along with lightweight wheels shod with tyres that are slightly wider and with more tread on than those on a road bike.

Half Full Jack of All Trades or Half Empty Master of None?

For those of us who see the glass as half full then a cyclocross bike has the best of both worlds. You can ride it like a road bike, but you can take it off-road, away from the traffic as well. The perfect steed for heading out into the hills, getting wet and muddy and covering the miles, but it’s still efficient on the road.

Of course, for those who see the glass as half empty then a cyclocross bike may just be a compromise too far. With it’s wider tyres it’s never going to be as fast on the road as a pure road bike and with it’s near-road-like geometry, narrow tyres, and lack of suspension it’ll never be as competent off-road as a mountain bike. It’s an all-rounder in many aspects, so it’s a jack of all trades, but master of none. Master of none that is except of course a cyclocross course in a cyclocross race.

Whichever way you look at it though if you don’t already own a cyclocross bike then buying one satisfies the n+1 equation of bike ownership so it has to be a good thing.

After a bit of shopping around I decided to buy a Viner Super Prestige Cyclocross bike. I was tempted by a slightly different category of bike known as a gravel bike or an adventure bike. These are essentially cyclocross bikes with a slightly more relaxed geometry and more clearance for slightly wider tyres. They also tend to have mounts for racks and mudguards too. In the end I decided against this and went for more of a pure cyclocross bike as it might be fun to do a few cyclocross races.

That said I did choose a 2×11 drivetrain rather than a 1×11 as I thought that would give me a little more versatility from the bike. I might want to use it for racing, but it’ll also be a good bike for commuting should I want to and for longer days out exploring fire-r0ads and the Welsh hills – the wider range of gears from a 2×11 would probably come in handy.

I didn’t go top of the range of course as this is a new thing for me, but I did decide that I wanted hydraulic disk brakes rather than mechanical ones and a carbon frame (I couldn’t afford Titanium). In the end I treated myself to a Viner Super Prestige with a 2×11 SRAM Rival groupset and WTB ST i19 wheels. Here she is after a quick build and her first small 10 mile ride. 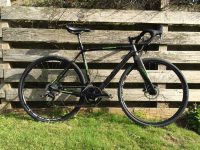 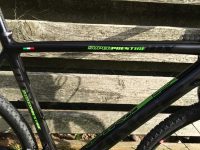 With a new cyclocross bike in the stable my ambitions were obviously drawn to cyclocross racing. This type of racing usually takes place in the autumn and consists of racing around short laps of a muddy field with various obstacles in it such as steps, sand pits and boards. As well as riding your bike around the course you also need to hop off your bike, shoulder it and run with it and hop back on. It’s fast, it’s furious, it’s fun and above all it’s muddy!

If you haven’t seen it before then this little compilation video gives you a taste of what it’s all about.

It’s probably the type of event that I’m not suited to. If you take a look at my triathlon performances, then I don’t really have a weak discipline, but the section that I could improve most would be the bike. If you break it down further and take a look at my cycling, my weak spot would have to be bike handling, descending and especially riding in slippery, muddy conditions. Add to that the fact that I’m fatter than I should be at the moment and particularly unfit then I don’t expect to do too well in a cyclocross race.

If there are three things that you need for cyclocross it is:

I have none of these at the moment. To prove this, and as part of a new training impetus, I did an FTP test on TrainerRoad this morning. Despite going as hard as I possibly could and getting my heart rate higher than I’ve seen it before, I still only managed an FTP of 293 Watts. The lowest it’s been for years. This is compounded by the fact that I was 72.5kg this morning, the heaviest I’ve been for a while. So, the all important power to weight ratio is sadly lacking at the moment.

I also took my new cyclocross bike out for a ride in the hills at the weekend. It was a nice ride, but I certainly don’t have the nerve or skills to ride it well once the going gets too steep or slippery, and my dismounting and mounting techniques definitely needs some work – you’re supposed to do it at speed, not stop as I do!

Here’s my new cyclocross bike out in the hills – bonus points for those of you who can pinpoint that gate! 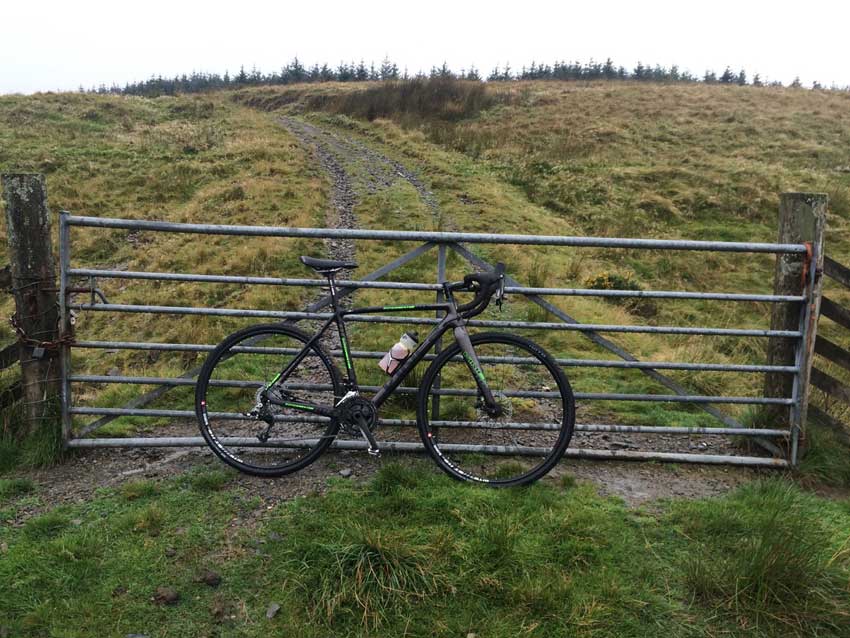 Out in the Hills

Back to the glass half full thing and I’m looking at this lack of fitness, lack of skills and lack of technique as a good thing. One reason for doing something a little different as far as racing goes is being able to turn up at a race to have some fun, with no expectations of mixing it up at the pointy end. At the moment I’m expecting to start at the back of a cyclocross race and stay there. I’ll only see the pointy end when it laps me (which will probably be several times).

This does of course mean that there should be plenty of room for improvement. It’ll be a good incentive to re-gain some fitness and who knows, forcing myself to ride in slippery, muddy conditions might improve my bike handling skills somewhat too. Although, as soon as I wrote that last sentence, the words ‘Old Dog’ and ‘New Tricks’ also sprang to mind, so I’ll leave the judgment of that until I’ve ridden a few races. In fact, the idea of this new little project of mine is just about riding my bike. I don’t have any real objectives and no expectations either. I only really have two aims:

If I can also finish a race without too much in the way of injury to man or machine then that will be a bonus.

So, look out for some blog posts soon recounting my days riding around muddy fields in Wales with a group of lycra-clad cyclists who are all much faster than me!