Time for a MTB race – well, a non-competitive, mass start MTB personal challenge really! After being asked to race for Scimitar Endurance I felt as though I should at least enter a few of the races that the others in the team were doing. Chris was signed up to do the 1st in the series of the Scott Mountain Bike Marathons, I had a new Scott hardtail mountain bike, and the race was in Builth Wells so not far from here. I duly signed up and then kind of forgot about it and had barely ridden my bike since.

Before I knew it the race was only a week away. I took my bike out for a little spin on Monday to make sure all was OK with it. I then hurt my back on Monday afternoon whilst surf skiing so had been hobbling around the house like a geriatric all week. Chris had decided to do the King of The Mountains sportive in South Wales as he was expecting the Builth MTB Marathon to be a bit of a mudfest. I was therefore on my own as I arrived in Builth ready to see if I could ride the full marathon route. There were of course two shorter distances as well and I had told myself that if my back hurt I could always do one of those.

After signing on I headed back to the camper to get changed. No Scimitar Endurance clothing for me as planned though as we haven’t heard much from them since agreeing to race for them. I hope the clothing materialises soon as I’ve already paid for and signed up to a number of races I probably wouldn’t have otherwise done, and have bought a new bike! Any excuse for a new bike!

I prepped my bike with my number plate and noticed that they had spelt ‘ Endurance’ wrong on it. Nevermind, no one would see it –  unless of course I point it out in a blog post! 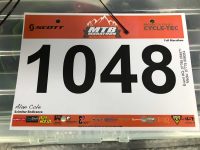 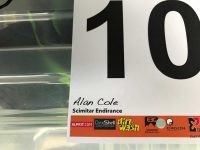 After hanging around in the camper for a while it was time to head off to congregate at the start area. As usual I couldn’t decide what to wear and ended up putting my jacket on which was probably unnecessary. Soon the start area was filling up with 800 people about to head out onto the hills of the Brecon Beacons. There were plenty of fast looking people around. The announcer was talking about the world champions, UK XC champions, 24 hour MTB champions and other big names that were there. I was just another face in the crowd wondering if I’d be able to complete the full 65km. I hadn’t ridden that far on a mountain bike for quite a while.

Soon we were off. I started out a little way back from the front but went off fast. The first 5 miles or so were behind a pace car, uphill along the road. By the time the lead car pulled off and we headed out onto the hills I had made my way through the pack a little and had caught up with the front end. I could see the car as it pulled over so was in a good position. The racing snakes at the front sped off up the hill and I settled into my pace. Hard but comfortable for the first proper climb of the day. This climb was steady and prolonged but I was going well and keeping pace with those around me. The trail now looped around on top of the grassy hills with views out all around us. a few short wide grassy descents and more contouring around the hill and we were onto the first descent of the day. A slippery, slimey, squirmy, off-camber muddy track that was horrible. I teetered my way down it slipping sideways most of the way. A few people seemed to be coping OK with it but most were struggling with the slippery, muddy conditions.

And that was about it for the rest of the day. steady climbs, some a little steeper where I just lost traction in the mud. Tracks across the tops of the hills and then horrible slippery muddy descents. One section contoured around the side of a steep hill on a little muddy sheep track. I saw a few people fall off here and tumble down the side of the hill. I didn’t fancy joining them so took it easy and lost my mojo a little here. The section after the last feed station wasn’t nice either through a root infested muddy woodland. Again all very slippery and squirmy with no real flow.

We eventually emerged out onto the main road for a fast descent back towards Builth Wells and then some of the muddiest sections of the whole ride. Thick wet sloppy mud over a rocky trail all the way back to the finish line. I was fighting off catastrophic cramping by now so was taking it easy and had slowed my pace. I was fine as long as I was pedalling in a straight line but the squirmy conditions meant I had to brace and tense up to keep the bike in a straight line, it was then that the cramps set in. I made it though and felt fine by the end.

Not the most exciting of races, not the most exciting of courses and not the best of conditions. At least it wasn’t raining as well as that would have been horrible. I’d done OK and had a respectable time of around 3 hours 52 minutes. I have no idea where that puts me in the standings yet but hopefully those will be published soon. I headed home and spent almost as long cleaning the mud and grime off my bike! 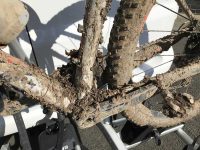 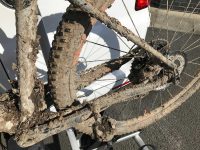 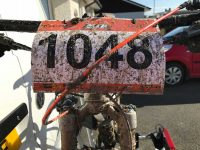