Another weekend away in Ramsey our Campervan for me. Although it was quite a wrench to tear me away from Ynyslas on Saturday morning. I had arranged to meet Mark in Colwyn Bay, but before I left I wandered over to the beach in the early morning sunshine. The skies were blue with the sun rising from behind the hills, there was an offshore wind and some prefect waist to chest high waves rolling into the beach. Held up by the offshore wind they were the perfect waves for long rides on a surf-ski.

I did see if Mark could come here instead but it wasn’t to be this time so I headed off to North Wales leaving perfection behind me. The drive through Wales was nice enough although it was getting cloudier the further North I went and it even started to rain at one point. I made a stop in Dolgellau for diesel and a wee and then another toilet stop at Treetops Adventure just outside Betws y Coed. I was toying with the idea of parking up here for the night and was going to ask if it was OK but there was no one around. I did notice that there was a shower though so decided to head back there later. I arrived, early as usual, in Colwyn Bay so headed off to the toilet in the Porth Eirias building.

Mark arrived early too so we were soon on the water and heading off towards the green Rhosneigr Buoy. The water was silky smooth without a puff of wind and no real swell either. We glided across its surface chatting and looking out for wildlife. At the buoy we headed across the shallow water of Penrhyn Bay. By now the sun was beginning to break through the clouds. There were loads of seabirds about and soon we could see seals on the rocks as we approached the Little Orme. Seal Cove was living up to its moniker too. As we approached a whole colony of seals could be seen shuffling their way towards the water. There were at least 40 of them all reluctantly moving from the beach towards the safety of the water as we approached.

We left them to it and headed off around the Little Orme giving them a wide berth so that they didn’t feel the need to get wet if they didn’t want to. Things got a little choppier under the imposing cliffs of the Little Orme. The tide could be seen racing in the opposite direction to us and waves were bouncing off the steep cliffs to create some confused seas. It wasn’t too bad though and didn’t last long so things soon calmed down once we were into Llandudno Bay.  We paddled to the beach had a quick break and the turned around and headed back. The sun was now out and with the tide helping us we made good time on the way back. We put in a little extra effort too and were soon back on the sands of Colwyn Bay after a lovely 9 mile paddle.

We played around remounting for a couple of minutes, something Mark hadn’t tried yet! and then packed up.

After packing up and chatting I headed off to the Gwydyr Forest where I was hoping to recce the bike portion of the Fabian 4 Mountain Challenge. I’m hoping to complete it later in the year and have already recce’d the run portion. The run was pretty tough so I was expecting the same from the bike portion too. It shares some of the trails with the Marin Route in the Gwydyr Forest but starts off a little differently. I had the route loaded onto my Fenix 3 so once I’d managed to get it going (the buttons are broken) it was farily easy to follow it. If I went off course or took a wrong turning the watch beeped at me and I was able to correct immediately.

By now the sun was out, it was warming up and there were plenty of people out enjoying the forest either on foot or on two wheels. The start of the ride was perfectly suited to a Cyclocross bike, although there was one very steep climb that I needed extra gears for even on my mountain bike – Yep, I had to get off and push! The majority of the first half was on fire-roads so should be relatively straight forward even after a tough paddle and an even tougher run. The second half had a fair bit of single-track, some of which definitely required a mountain bike. In fact it will feel quite technical I think after a long day of other activities. The Fabian 4 Mountain Challenge is indeed going to be quite a challenge!

Showers, Liver and Onions and a Night in the Camper

With the activities finished for the day I headed into Treetop Adventures for coffee and a cake and to see what time they were open until. I had hoped to have an evening meal there and then park up for the night. However, they stopped serving food at around 4pm. Also, although it was OK to park up overnight they lock the gates and they wouldn’t be open until 8am the following day. That was no use to me as I had to be in Chester by then so I decided to start heading in that direction anyway. I did have a shower before leaving though.

I decided to head to the Butcher’s Arms again. I stayed at the ‘Britstop’ here a while back and it seemed the ideal place for the evening. 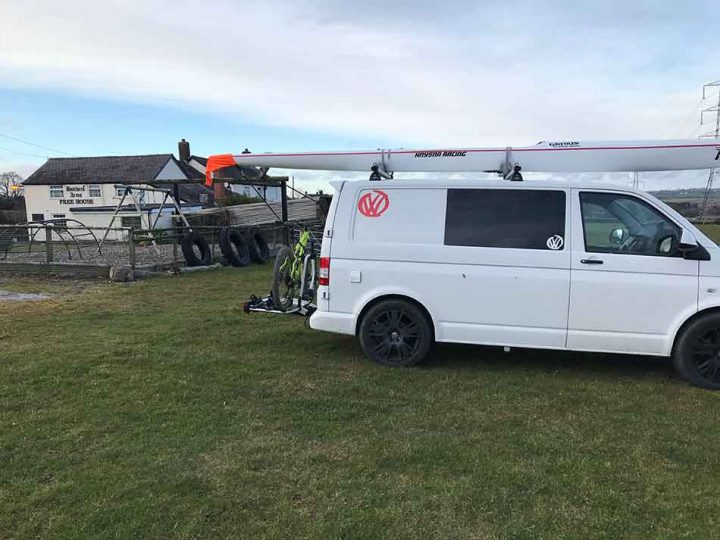 It was about an hours drive so once there I headed off for a little stroll in the evening sun to investigate a ‘mini castle’ before heading into the pub for dinner.

A nice plate of Liver and Onions in what was a surprisingly busy pub. Last time I was the only person there. Suitably refreshed it was back to the camper for a quiet and cosy night. I was a little worried about not being up in time as the clocks were due to go forward. I also wasn’t sure whether an alarm on my watch or phone would adjust for it automatically or not. I therefore set a timer for the required 7 hours and went to bed.

It was a cold night and there was ice on the inside of the windows in the morning. I had to ask Google what time it was in order to decide if my watch and phone had ‘automagically’ adjusted for BST. They had, so after breakfast it was off to Chester to meet people for the Hare ‘n’ Hounds race on a lovely calm River Dee. 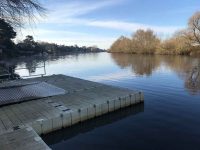 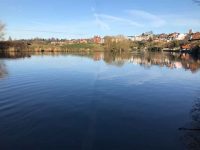 Before the race I met up with John for some technique coaching. I had a go on the kayak ergotrainer while he critiqued my paddle stroke and then we headed off upstream to the start of the races. John continued to give me some pointers as we paddled along. I did feel as though I was improving by the end of it, even if keeping up the better technique would be difficult once I lost concentration. I have plenty of things to work on though and now know to a certain extent where to start.

We were soon at the road bridge and lining up for the start of the race. A couple of people started a few minutes before me and then I was set off with 4 other people. John who had been coaching me earlier was off at the same time as me, as was Simon, Bob and a girl called Georgia who shot off ahead of us right from the start. I slotted in at the back of the rest of the group as the four of us stayed together for the first stretch up to the turnaround point. I was still getting to grips with the boat that I was in and just about hanging onto the backs of the others. I was right with them at the turn but still don’t quite have the hang of steering a K1. By the time I’d overshot the turn a little and negotiated the 180º turn the others were at least 10 boat lengths ahead of me. Annoyed at losing so much ground in such a way I put in an almighty effort to start clawing them back.

It took me a mile or so to actually catch them but eventually after going under the road bridge where we had started I closed in on them. A lot of work just to get back to where I had been! Rather than let up though I kept the momentum up and powered past them. John shouted at me to keep my hands up high (the main thing I need to do to improve my stroke) and on I went. I was catching Georgia ahead of me now as well, and the people that had set off 3 minutes before us too. I passed them and started very slowly closing in on Georgia. I lost a bit of time though negotiating and stopping for a sailing boat that decided to tack in front of me and then had to divert course for one of the large pleasure cruisers too. Georgia had opened out a bit of a lead again but I closed it down a little towards the end but just couldn’t catch her. With the first part of the TT done I eased up a bit for the second part but continued on down towards the weir and back for what turned out to be a good hard paddle. Simon almost caught me on the way back though, probably closing down the gap on the turnaround at the weir!. Had I known he was closing in on me I might not have eased up!

I had a quick go in a slightly more tippy boat and then after a shower headed up to the club house for soup, some chatting and a watch of a technique video. Another good day and some hard work on the river.

I popped into Cheshire Oaks before heading home but it was a fairly unsuccessful trip. Far too many people for me, parking was difficult with a 6m long ski on the roof and very little room for manoeuvre. The shop I wanted to visit was rubbish and I couldn’t find the Lindt shop to buy Anna some chocolates either. Defeated by retail I headed home for a pleasant drive through Wales. Back at home there was still plenty of surf as Anna and I went for a walk along the beach. 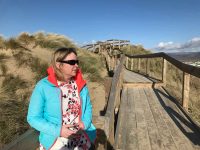 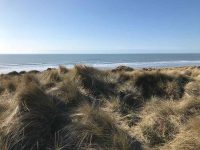 Another busy weekend, although hopefully next weekend some of the Surf Ski paddlers will be coming here to sample the delights of Ynyslas.