Christmas with the Coles

Despite just being the three of us for Christmas it was still fairly hectic. Morgan didn’t break up from school until 3:30pm on Friday afternoon and Anna finished work at the same time. Morgan however had basket ball from 4-6pm after school so went straight there. Back at home I had the house cleaned and tidied and had got all of the Christmas snacks, sweets and cakes out ready for the festive season. The overindulgence was about to begin.

I collected Morgan from basketball and at last Christmas with the Coles was underway.

The weekend before Christmas

I’ve already posted about Saturday. Rather than stay at home and eat all the sweets I headed off for an early morning bike ride on my Mountain Bike. Morgan and I then decorated the Christmas Cake which joined the other sweets, crisps and snacks. The dining room table was now struggling under the weight of calories it contained.

Christmas Eve was a fairly relaxed affair at home. I pfaffed around with some bikes and swapped them around so that my road bike now lives on my turbo trainer and my old (1980’s steel framed Peugeot) bike that was on the turbo has been retired for good. Morgan and I were going to do a plyometrics session on the beach but the weather was horrible so we didn’t fancy it. Instead we waited for a slight break in the rain and had a short family walk across to the beach. 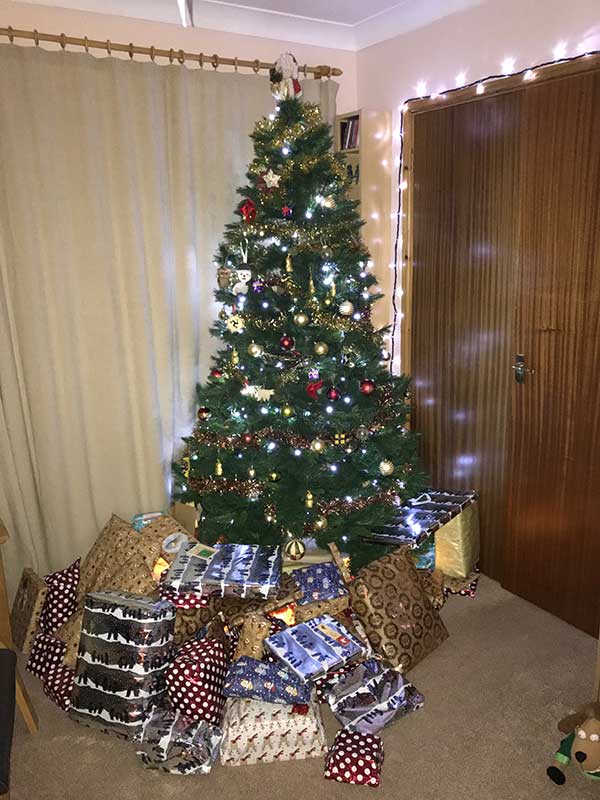 Gifts under the tree

As usual there was plenty for everyone. The usual customary gifts, half-expected gifts, the unusual gifts, the funny gifts  and the pleasantly surprising gifts for everyone.

Morgan’s main present was an XBox and he had games and subscriptions to go with it too. He also had a second main present of a winter wetsuit along with boots, gloves and a wetsuit hood – so there’s no excuses for him not to surf year round now! On top of that he had lots of fleecy bedding, an insulated jacket, some Lego, Nike clothes, some games, books and plenty of other things too including some cool RGB LED lights for around his bed! He even had a Super Dooper Reindeer Pooper! 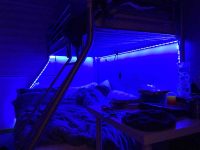 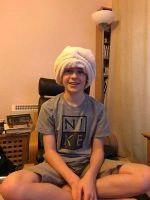 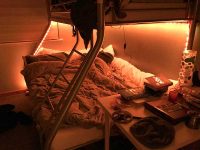 Anna had hydrotherapy treatment(s) of her choosing, a pair of boots, a softshell jacket, the usual Jamie Oliver Book, clothes, smellies, a heated blanket, heated hairbrush, and other girlies things. She also had a jigsaw puzzle as usual and there’s a Mi Band II somewhere between China and Wales for her too! 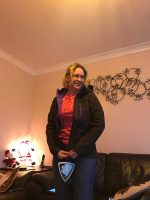 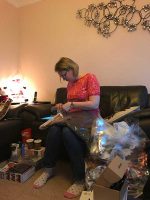 I had money towards a cycling jacket, cycling gadgets such as a digital pressure meter, wetsuit boots, a box of Flavourly craft beer, loads of nail varnish and some other nail varnish accessories. We also had joint presents of a family calendar and two volumes of our weblog book that I make each year. 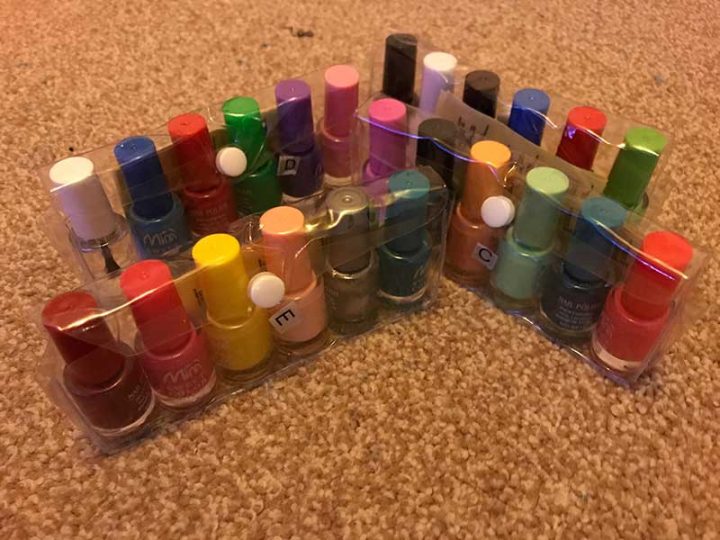 We also had loads of sweets and chocolates and other fun things too. 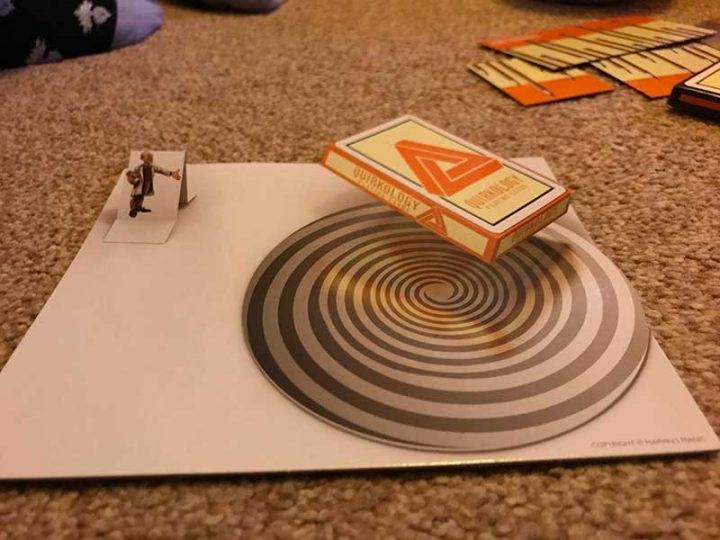 With the presents opened and family phoned Anna got to work in the kitchen while Morgan and I set up his Xbox. The cooking was kept easier this year by using frozen joints of meat from Iceland and even some frozen veg such as Sprouts with bacon and cheese, Cauliflower Cheese, and even the red cabbage with apple and raisins. The pigs in blankets and stuffing were ready made too which made life easier. 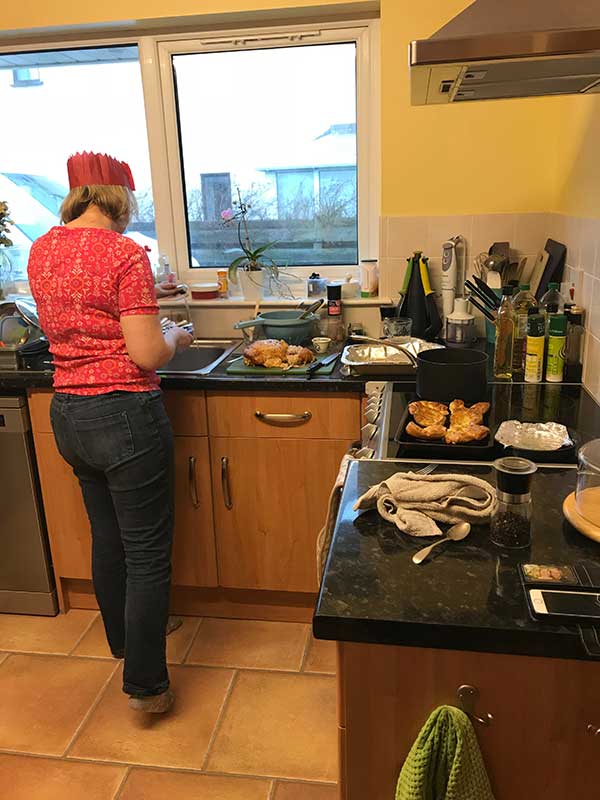 We still had a delicious dinner though with Roast Turkey and 14 accompaniments if you count the gravy. Some of it may have been ready made but you wouldn’t know it. I may even have had two complete plate fulls! 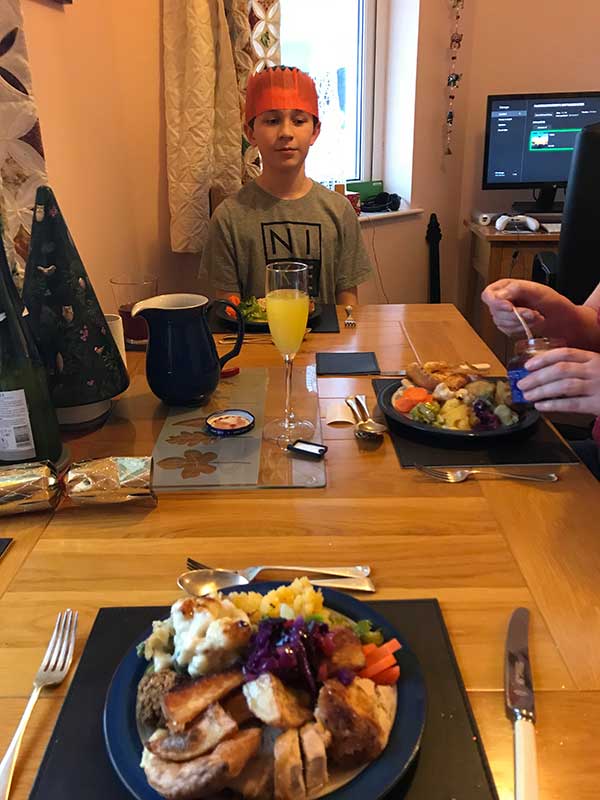 Mozzarella stick starters, Bucks Fizz, Glitterberry J2O and lovely chocolate mousse crackers for dessert along with the obligatory crackers, cracker jokes and charades finished off a lovely lunch together. We then chilled for the afternoon, playing with our new toys while Morgan was lost in the world of Xbox and chatting to friends about Xbox things on Facetime.

Later that evening we managed to fit in some cheese and biscuits, I had some mince pies and clotted cream too and lots of sweets.

Boxing Day dawned wet and windy but was forecast to clear up. I;d gained 2kg in weight!

I was due to meet people in Aberdovey for a sea swim at 12:30 but did a turbo trainer session in the morning just in case the wind didn’t ease enough to paddle across the estuary. The wind did ease though and the sun came out so I got changed, put the surf ski on the roof and headed down to the estuary. There were quite a few people out for a Boxing Day stroll as I paddled across the choppy waters to Aberdovey. I was of course wearing my new wetsuit boots! I was a little early – as is my wont – so paddled around the town before heading back to the jetty where we were supposed to meet. There was no one there so I hung around for a bit. Eventually one other person arrived. He was called Mike and I think he was the organiser of this swim. No one else turned up though so it was just the two of us.

It was pretty chilly on the beach and even colder in the water so we didn’t stay in long. We just swam around the jetty, jumped off the jetty and rang the bell under the jetty before getting out again. Mike got changed and headed off to warm up with a hot chocolate whereas I headed back across the estuary on my surf ski.

Back at Ynyslas there were now row upon row of cars parked on the sands as everyone seemed to want to walk along the beach for their Boxing Day stroll. I headed home and after a while Anna and I headed off to the beach for a little stroll too. Our evening meal was a re-run of Christmas Lunch using up leftovers with a nice caramel toffee dessert. We then all watched back to the Future on TV. You can’t beat a film like Back to The Future!

All in all a lovely Christmas with just the three of us.

The following day was dominated by a bike ride for me. A chance to try out my digital pressure gauge on my tyres! A nice new cycling jacket would have been hady as it was freezing cold out there, but I’ve yet to decide on which one to get,

Again there was supposed to be a group of us meeting up but one by one they pulled out and I was the only one left so had a pleasant ride in the sunshine around Nant yr Arian with snow-capped hills as a backdrop. I did take it very easy on the icy road sections though following my recent crash. Anna and Morgan popped into town where Morgan spent his Game voucher on a headset for his Xbox. We had curry with the turkey leftovers and watched Back to The Future 2. The Christmas Hols are slipping by already.