It may not be the most exciting of moths to look at, but it has caused some excitement here today. 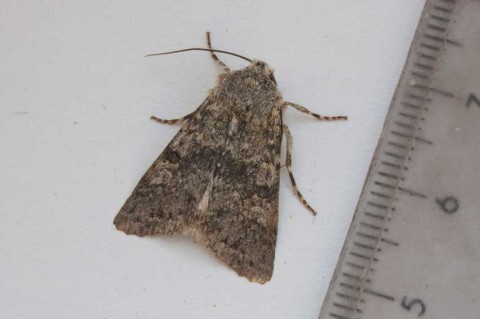 It’s a Black-banded moth (Polymixis xanthomista) that I found in the trap last night. It’s fairly rare in the UK having a designation of ‘Nationally Scarce A’. It is a sub-species distinct from those in mainland Europe and shows up locally on Scilly, the coasts of Devon and Cornwall and the Pembrokeshire coast. There has also been a single specimen seen at Gwbert.

There have been a few records from Ceredigion, but until now only 4 in total since 1901. This is the 5th seen in the county and the County Recorder has just been around to take a look at it – before I let it go to continue on its way of course. Not a bad catch seeing as the moon was bright last night so we didn’t get many moths in total. Just goes to show it’s always worth putting the trap out as you never know what might show up.

The total catch was: