A cyclocross race on a Saturday this weekend so as not to clash with the car boot sale at the Carmarthen showground on Sunday. The weather hadn’t been great but it was looking OK for the race. We were however expecting mud. I’ve also noticed that the last blog post was about last weeks cyclocross race. Not much has been happening in between. Work, school, chores, the odd surf, some running, surf-skiing and daily life otherwise. Anna’s got a new phone to blog about and her liver function is back to normal which is good. Morgan has been to school, surf lessons and even Scouts this week. Getting him to blog about anything is near impossible – maybe it’s not what the youngsters do! Other than that, we’ve been busy working and being normal everyday people here in West Wales.

My bikes were feeling a little worse for wear after last weekends races. My mountain bike which I had used for the Tide to Tide race was feeling particularly sorry for itself when I got it out of the shed. The bottom bracket and all but seized and once I freed it was sounding and feeling pretty sandy. The pawls in the rear cassette weren’t working either. It felt as though only one was catching so there was quite a lot of slack before the drive-chain would engage. There wasn’t much I could do about it now though other than put them on the back of the van and hope I wouldn’tbe needing the mountain bike.

Getting Ready to Race

The drive down to Carmarthen was pleasant enough. I decided to try out the Waze navigational app today rather than Google Maps. Just for a change. It was nice having a speedo on the screen as well as the map. This is something that the Google app lacks and with the oversized wheels on our camper it proved that we are indeed going about 8% faster than what the dash speedo says.

Once at the Carmarthen showground, I registered, collected my race number and got ready. As usual the kids were already out on their races, but half of the course was free so I had a little ride around and deposited my ailing mountain bike in the pits. As expected the course was pretty muddy and was only going to get muddier.

I’d forgotten to bring any water bottles or drinks with me so made do with a single energy gel and got ready for the race start. We were seeded as usual and I was somewhere around the third row with the usual faces around me. We chatted as we waited and made our usual excuses. I didn’t really have too many excuses today except for the fact that I had a bit of a cold and had done nothing but eat all week! 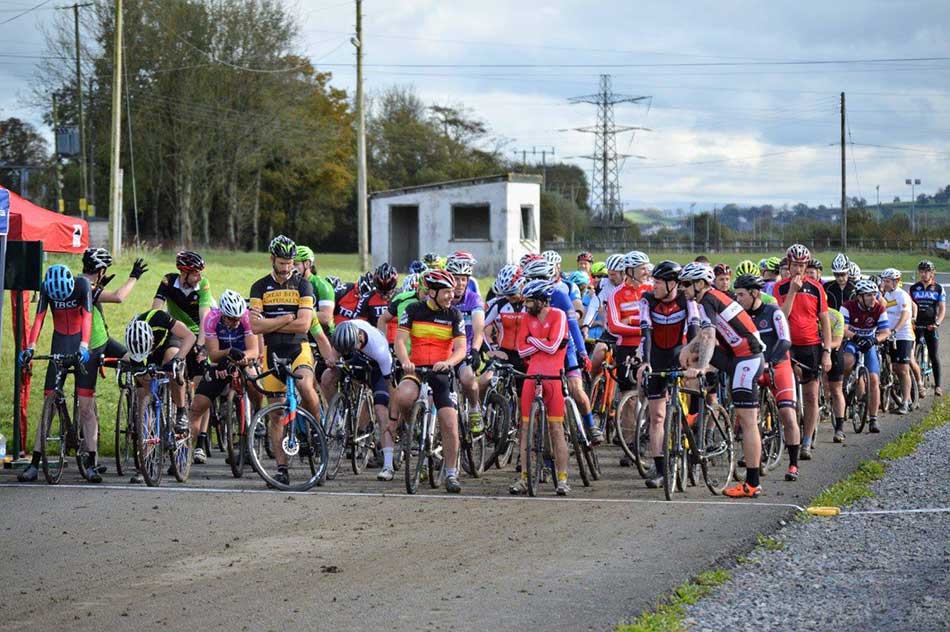 Then we were off.

The course consisted of a long start/finish line straight on tarmac that went into a few little muddy twists and turns. We then had to contend with the ‘Col de Carmarthen’, a steep bank that we had to dismount to climb up followed by a slippery descent into yet more mud.  Next were a couple of transitions from muddy grass to gravelly tarmac and back and then a mad square spiral that we would ourselves into and back out of. This painted a crazy GPS pattern. 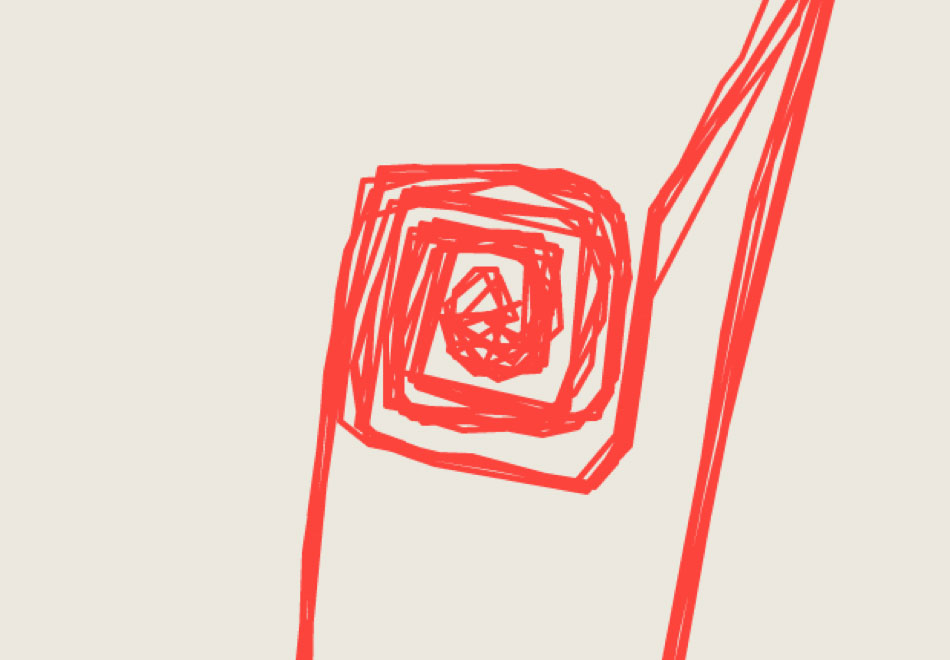 The spiral itself was a little muddy in places but fairly fast and ended up being the place where I gained quite a few places. More muddy grass, a wide gravelly section with a couple of puddles and then it was up onto a gassy bank with a couple of off camber dips and rises as the course weaved up and down the bank. A gravel section, more muddy grass with some 180º switchbacks and then up and over a steep off camber bank that required us to dismount again. There was a steep muddy drop-off from this bank, more slippery 180º switchbacks and then a fast grassy section into a tight, tricky chicane and then out onto the start finish straight for another lap. It was all quite flat with no real elevation changes, but the thick sticky mud made up for that. 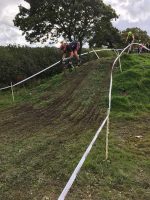 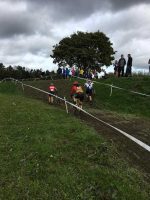 I lost a few places off the start and then lost even more into the first corner – I really need to be more assertive here! I did gain a number of places back on the first lap though. Unfortunately as I tried to shift into the big ring  for the start finish straight at the end of the first lap my chain came off. I lost my momentum. I had to stop to put it back on. All of those people that I had fought hard to pass went past me again, along with quite a few others. I stayed in the little chainring after that. I regained some of these places on lap two and then settled into a decent pace for the rest of the race.

The laps were quite long. I was expecting to hear the bell after lap 4 as I’d already been going for 35 minutes but didn’t. So still had two laps to go. I actually felt better the longer it went on, but my bike was beginning to struggle. As I descending from the slippery slopes from ‘Col de Carmarthen my rear wheel locked up completely as it was just so clogged up with mud, grass and even a number of fairly large stones. I had to stop to clear it a little but it was never going to spin nicely whilst so well clogged. I plugged away though and kept going through the thick sticky mud. I’d been overtaking people here and there, but I think most of them were now people I was lapping from the V50’s and womens field. The last lap was my slowest even though I was feeling fine.

It ended up being a long 55 minute race for me. My bike was a mess but as usual it had been good fun. It takes me a number of laps to really get into it and then just as it’s beginning to hurt it’s all over with. Perfect. I don’t think I’m getting any better at it yet but I’m usually somewhere in the middle of the field which I guess is better than being at the back!

It would be nice to see the overall standings just to see how the series is progressing but for some reason these aren’t published. Someone somewhere must know what they are though as that is what the seeding is based on each week. By counting the names before me that means I must be somewhere around 25th in the standings at the moment, but I have finished every race in the series so far so have points for all of them which helps.

Next week it is local to me in Aberystwyth, so only a short drive, but I’m not sure if I’ll be there or not as I also have a Kayak Time Trial to do in North Wales at the same time. Decisions decisions…