I enjoyed that one! The Abergavenny round of the Welsh Cyclocross Series is the biggest race of the series. It is part of Crosstober Wales, a weekend of cyclo cross racing brought to you by the passionate folk of Abergavenny RC. S4C are there to televise the elite races on the Sunday. There are also National Trophy races in Sunday which means that the Welsh Series races are on Saturday for a change and part of a warm up event for the main act. The course we use is very similar to those of the National Trophy Series and Elites which means that many of the super-fast racers from these divisions race with us as a warm up. The prospect of mopping up any points for the regulars of the Welsh Cyclocross Series is therefore small. Not only is the field of racers larger than usual, but the calibre of rider is pretty high too.

As well as racing on Saturday rather than Sunday we were starting an hour earlier than usual, so with a 2¼ hour drive to the venue I had quite an early start. It was a pleasant enough drive to Abergavenny if a little slow stuck behind lorries and driving through thick fog along the Welsh roads that were strewn with autumn leaves. The thick fog, mist and murk cleared as I approached Abergavenny and the sun came out while I signed on and got ready. I was number 13 today. Unlucky for some! I’m not superstitious but pinned the number on upside down anyway as I think that is the ‘done thing’. I know, it’s not like me to want to ‘fit in’ but the cycling fraternity is an odd one and sometimes it’s easier to just go with the flow! 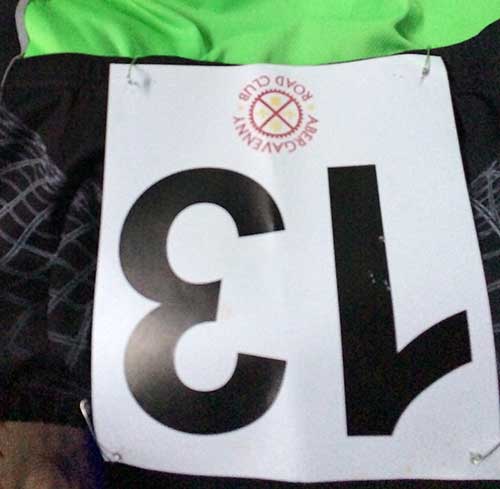 The first technical section after a short climb from the bottom part was a steep downwards slope into a slippery 180º turn and back up the slope. Getting traction at the top of this slope was difficult. We then rode across the tennis courts and up into a little wooded section before emerging out onto a grassy bank for a series of switchbacks. The off camber turns here had me teetering and slipping. Another little section through the woods ended with a rooty turn onto another grassy slope for some more slippery off camber action and then some more tight bends. The second of these was particularly tricky. There were a few slippery turns up to and back off one side of the tennis court again and then a root infested section through some more trees. We then rode along the other side of the pits, and weaved through a few trees as we dropped down onto the tarmac finish straight. I was able to ride this top section a few times before the start of the race.

Although I didn’t ride it before the race, after the finish straight there was a steep, slippery but quite fast off camber turn onto the lower field followed by a couple more slippery turns and then two quite high hurdles that were placed close together and immediately before a steep bank. The steep bank was followed immediately by a 180º turn onto and back off the tarmac, then another ride up and down the bank before a couple of 90º turns on the grass took us out onto and around the lower playing fields. The following section was less technical as it made it’s way around the entire field, but was quite energy sapping as it consisted of a long grassy straight into the wind and then a gentle climb along the far side of the field before the short steep climb back to the top part of the course. The whole lap was about 1.5 miles long.

Before long it was time to line up for the start. There was a little confusion at first as to where exactly this was but we soon sorted it out and congregated on the lower field ready to be called up into our starting positions. As usual, this was based on our overall standings in the Welsh Cyclocross Series. Having amassed quite a few points by completing all of the races so far I found myself out of place on the front row! Talk here was of the fact that the National Trophy Series boys that would be placed at the back of the grid would come shouting and barging past us in no time, and probably with little respect too!

It took a while to line everyone up as the number of racers was so large but soon we were told we would be starting in 2 minutes.

The whistle went and we were off. I didn’t have the best of starts and soon people were streaming past me All of those on the front row left me behind and quite a few of the people that I know who were starting behind me overtook me too, including Chris and Will who I had been chatting to before the race. I lost a few more places into the first sweeping bend too as those faster riders from behind pushed and barged their way through. Things settled down a bit along the straights around the lower field but then as we started the more technical sections around the top things bunched up into the first tricky turn. Amazingly I made up a few places here and headed out across the tennis court on Chris’s wheel. I followed him through the woods and into the off-camber turns. I even tried to overtake at one point which is when he realised it was me. I did laugh as he looked back to see me right behind him, but as we went through the woods he managed to overtake someone and then pulled out a bit of a gap on me. I was going well by now and settling into things, but still had the start of the bottom field to do which I had yet to ride.

As we dropped down onto the bottom field after the finish gantry I managed to pass Chris as he had come off on the off camber turn. I pulled out a bit of a lead on him around the next few turns and over the hurdles but knew he would be chasing hard. 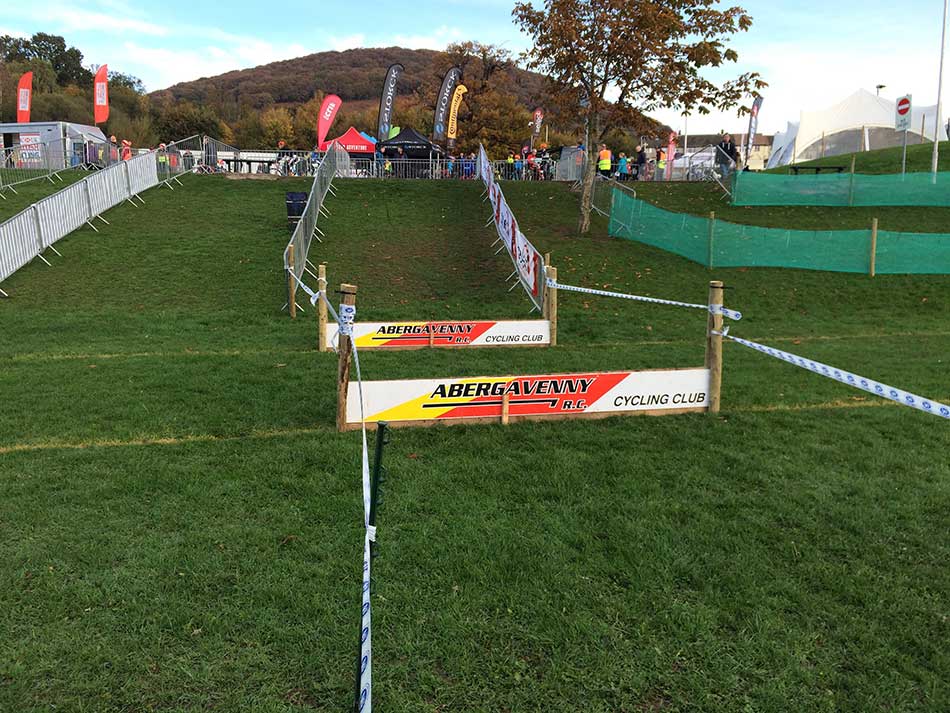 As we climbed up to the top part of the second lap I overtook Will as well and was now feeling good. I had to keep going hard knowing that Chris would be chasing and that I had lost quite a few places off the start line. The off-camber turns on the top field that I had teetered around in practise felt much better at race pace. I felt as though I had plenty of grip and much more control so was actually able to carry more speed through them – much better than my usual ‘Bambi on ice’ impressions! As I came to the tricky and very tight turn someone had come off and there was a bit of a jam. I wasn’t very good at this turn anyway so I jumped off and ran it in order to avoid the other riders. As I did so I decided that running this turn was actually quicker and made up my mind to run it on each subsequent lap.

The laps were soon ticking by and I had overtaken a few more people. One or two had passed me but I’d gained back more places than I was losing. I was holding my ground on Chris who was now a couple of places behind me and Will seemed to be dropping ever further back. (He was Jet lagged having been in Texas yesterday!). As the race wore on, I felt better and was soon lapping slower riders which is always something of a boost. You do sometimes get held up by them on narrower sections but overtaking always feels good. The long windy straights around the lower field were gradually sapping at my energy but the rest of the course provided some opportunities to recover a little despite being fast and furious.

Before long it was time for the bell and a final push on the last lap. I was catching a guy (no. 66) and tried to get past him. He cleared a slower rider better than I did and I got held up through the woods by her. This allowed him to pull out a bit of a gap again. I passed the slower rider and sprinted for the line trying to catch him but didn’t quite make it finishing less than a second behind him.

I felt as though it had been a good race. I wasn’t sure if I would have gained any points for the trophy series as there were so many people in the rae today but I was pleased with my performance and particularly pleased with some of my cornering for a change.

I didn’t hang around for long afterwards so was soon on my journey home. Once again, this was a slow drive with lots of traffic and mist, rain and murk over the hills. Back at home there was just time to clean my bike and the van before dinner and lots of snacks. The results were published (http://results.smartiming.co.uk/view-race/crosstoberwaleswomensandvets2017/) with me in 32nd place in the V40 males. Not too bad and it should be enough to add a couple more points to my overall tally in the trophy series.