Another autumnal weekend and another cyclocross race. This time it was the Hafren Cyclocross race in Newtown. I hadn’t slept at all the night before thanks to the raging storm Brian so I felt tired before I even set off. At least it was only just over an hours drive through the Welsh countryside for me today. I soon arrived and parked in the school car park near to Parc Trehafern.

I’d never been to this part of Newtown before. In fact, I don’t really think I’ve ever been to Newtown at all before. I’ve driven through it plenty of times and may have stopped at a petrol station or supermarket for supplies but that was all. I signed on at the nearby Scout hut and then started to get ready. The wind was still howling and it was cold too. On with the long-sleeved thermal top and leg warmers. It was still pretty chilly though and there wasn’t much opportunity to pre-ride the course to warm up either. The children’s races were well underway but I couldn’t really see much of the course. The park looked quite nice though bounded to it’s north by the River Severn which was swollen with the recent rain and muddy brown as it sped past.

The youth race was soon over with giving me chance to ride around the course to see how it was.

The lap started with a long grassy straight with one or two slightly off camber sections and little bends. This was going to be into the strong wind. It was completely flat though and should provide a fast and frantic start. From here we went into a few little turns, a muddy section, more grassy turns and then more fast straight before two hurdles and a little turn down and up a grassy bank. We then had a little muddy rocky climb into a wooded section and a slippery descent and some think mud before what is affectionately known as the lactic ladder. It’s a set of muddy steps. There is a smoother muddy section to the right of it that some people on mountain bikes were able to ride. For most it was a case of dismounting and running up the steps as best they could with their bikes on their shoulders. This was my tactic here too. 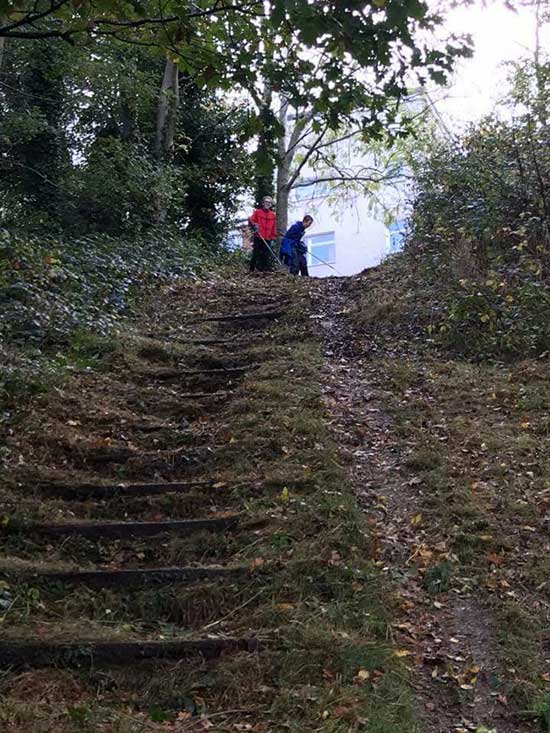 Next was a more technical section through the woods with a nasty off camber root-infested turn before an off camber grassy descent into what looked like a smooth grassy section along a path. It certainly wasn’t smooth though and felt more like we were riding along a gravel filled soakaway – perhaps we were. There was then a short climb into the woods again, a couple of twisty sections through the trees, before we emerged out of the trees for a few 180º grassy switchbacks and then crossed the start/finsh line to do it all again.

This was the 7th race of the series. Having done them all so far I’ve accrued quite a few points so was once again seeded on the 2nd row, further up the field than my fitness or skills really warrant. It’s a good place to start though even if it does mean that I tend to get passed by more people than I myself pass.

The start was as predicted, fast and frantic, especially as we approached the first slightly off-camber section that created a bit of a bottleneck. I had a good enough start but did feel as though I was losing more places than I should have as the faster riders passed me.

Things soon settled down and I rode a good race. I ended up racing a couple of people, one of whom would tend to pull away on the trickier, technical sections on the 2nd half of the lap, only for me to catch them on the straighter sections. There was someone else who tended to be faster than me on the straights but who I could pull away from through the technical bits. We seemed fairly well matched though. As the race wore on and I got more into the flow I started to pull away a bit and then started to catch and overtake people. I’m assuming that most of these were people I was lapping, but who knows, one or two of them may have been direct competitors. I tended to overtake quite a few people while running up the lactic ladder. 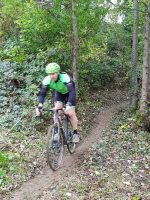 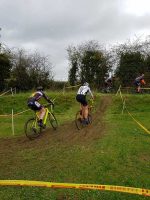 The bell signifying the final lap sounded sooner than I expected. I looked at my watch and I had indeed been going for over 40 minutes and all felt good. I picked up the pace just a little for the last lap and crossed the line feeling fairly pleased with my performance. The results aren’t out yet so that may well change once I see them.

It was still cold so I didn’t hang around for too long. I grabbed my bike from the pits, walked back to the van, got changed and headed home to see how the cat was – Anna had sent me a text message while I’d been there to tell me that Robbie our cat had gone blind all of a sudden and was struggling to get around. I’ll leave that for another post though.

All in all another good day out and a good race. Well organised and well participated as always.