Getting Better at Surf Skiing

I’m still certainly no expert but I’ve come quite a way since my first few attempts at surf skiing on my new surf ski. If you’ve never tried surf skiing then they are a very unstable craft. The old one I had was bad enough but when I got my new Racing Ski from Knysna earlier in the year it was quite a shock. My old ski was a very old, very heavy surf life-saving spec ski. Although I thought it was quite unstable it wasn’t, not in comparison to modern racing ski’s anyway.

I wanted a newer lighter craft for racing on and at first couldn’t quite decide between surf ski or K1 racing kayak. I went for the surf ski as it would be more versatile in the waters that I live near, and safer as it can be re-mounted. The next choice was the stability of ski. A beginners ski would maybe have been as stable or possibly more stable than my old ski. Next, there are varying degrees of intermediate ski, and varying degrees of advanced ski. I went for a mid intermediate ski knowing that it would be less stable than my old one but hoping it would also be faster. Maybe I should have gone for a more stable one really because when I first tried it out I was struggling just to stay on it! Remounting was even more difficult and there was no way I could work on paddling technique from such an unstable platform. All my concentration had to go towards staying upright. I have no idea what it would be like surf skiing on an advanced ski!

Things have improved since then though. I’m now much more confident in it and can stay upright in choppy conditions as well as dead flat seas. I’m not going to say that surf skiing is now easy. It’s still fairly unstable and there still hasn’t been much work on technique going on, but I’m definitely getting better. I recently completed the Great Cumbrae Kayak Race which included some pretty challenging conditions for me. I wasn’t fast but I got around in one piece. I’ve also had some good days out in the surf.

Fun in the Surf

Yesterday was one of these, perfect 2-3 foot peeling waves with lots of people out surfing at Ynyslas. The sun came out, there was little if any wind and the temperatures were soaring. 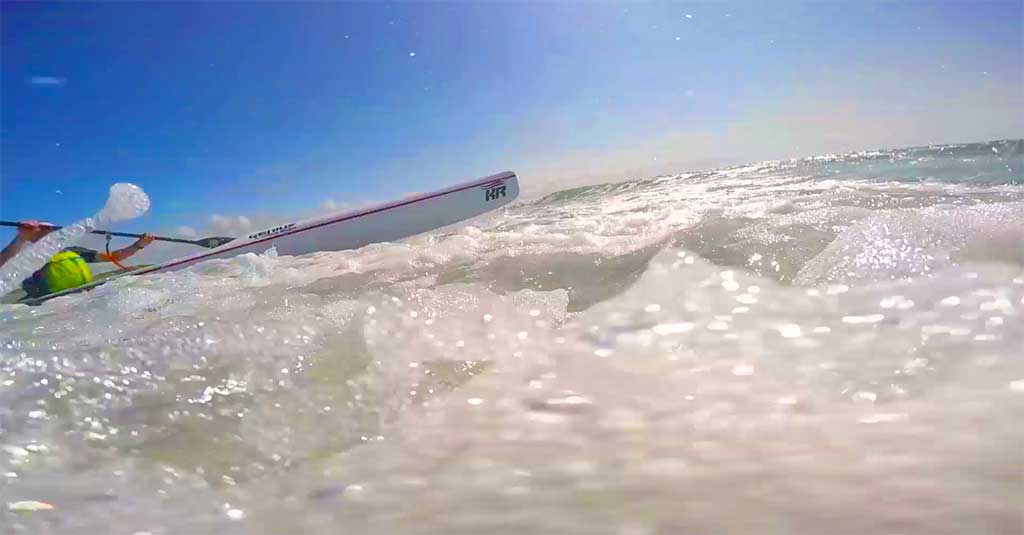 Out through the waves

Morgan came over for a surf and I headed out in my ski punching through the white water and soaring off the tops of the waves. I was going to do some ‘training’ but the surf was just too good so I had to play on the waves instead. I wouldn’t have been able to do that in a K1 Kayak!

If I put in a bit of a spurt I can paddle as fast as the waves and probably even outrun them so it’s possible to catch waves right out the back and ride them all the way in. I’m getting better at this too. It used to be that things would get a little wobbly as I picked up speed on the face of the wave but my bracing strokes are better and I now feel fine skimming down the wave. Come the end of the session I was even carving across the face of the wave more. At times I was right in the pocket, bracing under the curl of the wave with the tail of the ski in the whitewater behind me and the nose out on the open face of the wave.

It might not have been training but it’s all good fun and has to help with my overall ability in the ski. I’m not sure that I’m any faster in my new ski than I was on my old ski yet, but going along at around the same speed does seem a little easier. Sunday saw me paddling into Borth and then on to Aberwennol and back. A distance of just over 6 miles. It was a steady paddle with not too much in the way of chop or swell to contend with and not too much wind or current either. I managed to average 5.6mph which isn’t great but I guess it’s not too bad either. I need to work on my paddling technique though but maybe I should do that over the winter from the relative stability of my older ski.