Having finished off the northern end of the Wales Coast Path with a run from Mostyn to Prestatyn a few weeks ago, it was now onto the Offa’s Dyke Path in an attempt to continue my circumnavigation of Wales. Rather then just do the Coast Path, I have decided to link the northern end of the coast path at Prestatyn with the southern end at Chepstow by running the 178 mile Offa’s Dyke Path along the Wales – England Borders. This should take the total circumnavigation distance up to just over an epic 1000 miles.

The Offa’s Dyke Path is supposed to be one of the classics among Britain’s challenge walks. Most people walk it south to north from the Severn Estuary to the North Wales Coast. I’ve been heading in a clockwise direction so far so will be running it in the opposite direction. This long distance path is an official National Trail so should be well waymarked as it follows Offa’s Dyke, the longest linear earthwork in Britain.

So, on Saturday it was time to drive back to Prestatyn and start the Offa’s Dyke Path. The plan today was a stage from Prestatyn on the North Wales coast to a little village called Bodfari in the northern part of the Clwydian Range. Public transport between the two didn’t look great but Anna had offered to come along so that she could drop me off in Prestatyn and pick me up at the end. Morgan was away with friends for the weekend at the Big Tribute Festival, so the two of us set off on Saturday morning, heading north through Wales. It was drizzling most of the way there, but did brighten up as we hit the north coast. We soon found our way through Prestatyn and stopped about 100 yards from the large ‘Dechrau a Diwedd’ (Beginning and End) sculpture marking the trail. 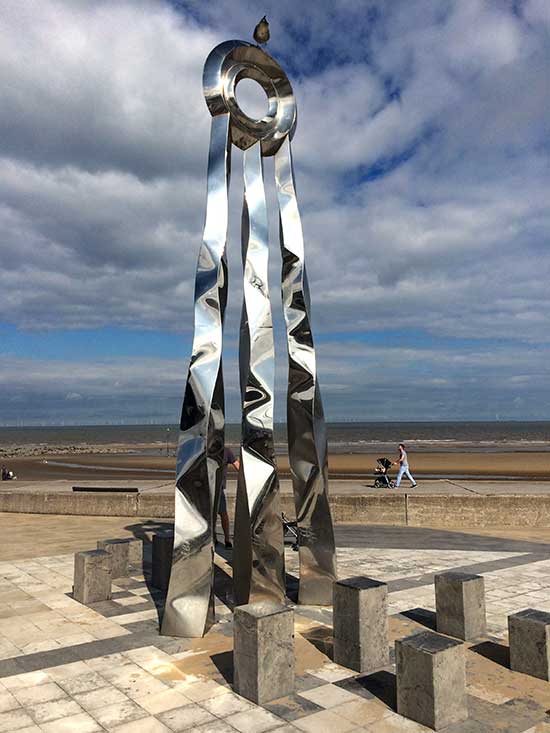 I put my running shoes on, Anna jumped into the drivers seat and we planned to meet partway along the trail at Rhuallt in about 90 minutes time. I headed to the seafront ready to start running from under the sculpture. There was an information board here telling me a little about the Offa’s Dyke Path. According to the information board it was 177 miles to the end of the path at Chepstow. 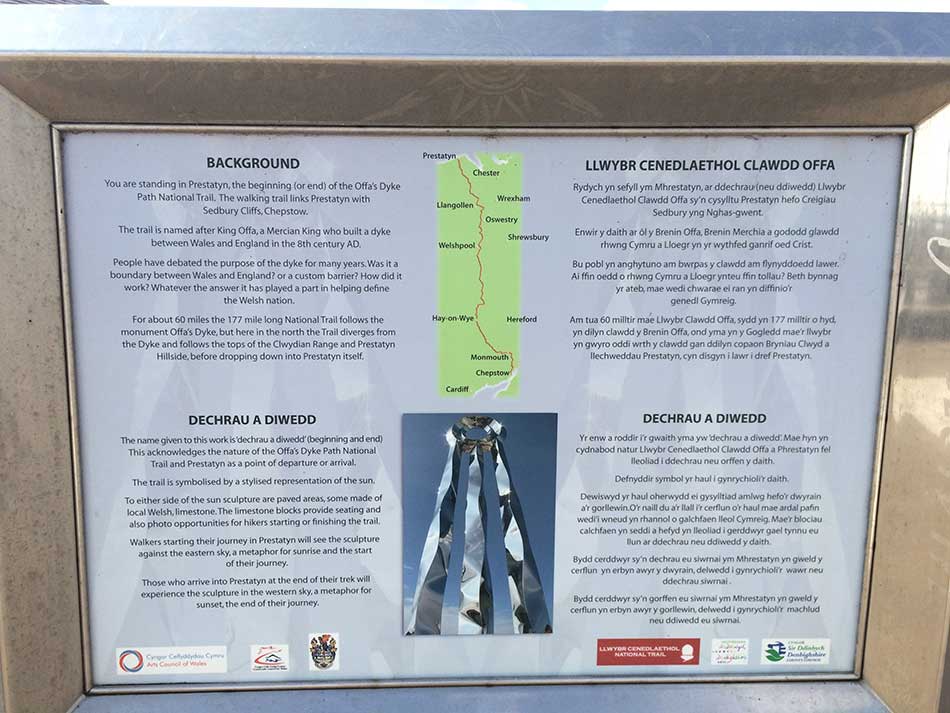 I tightened the straps on my rucksack and set off. Just down from the sculpture was the first of what would hopefully be many signposts pointing me in the right direction. I’d only gone a few metres and already Chepstow was now an extra 5 miles away! 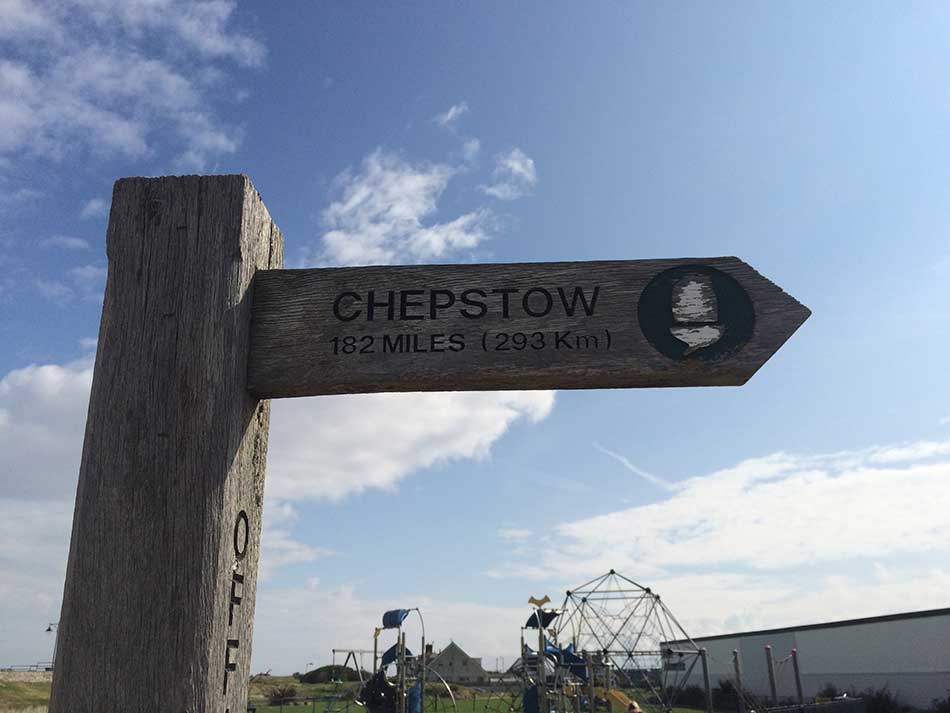 I made my way through the streets of Prestatyn. Every now and then the little acorn sign of the Offa’s Dyke Path was embedded into the pavement. 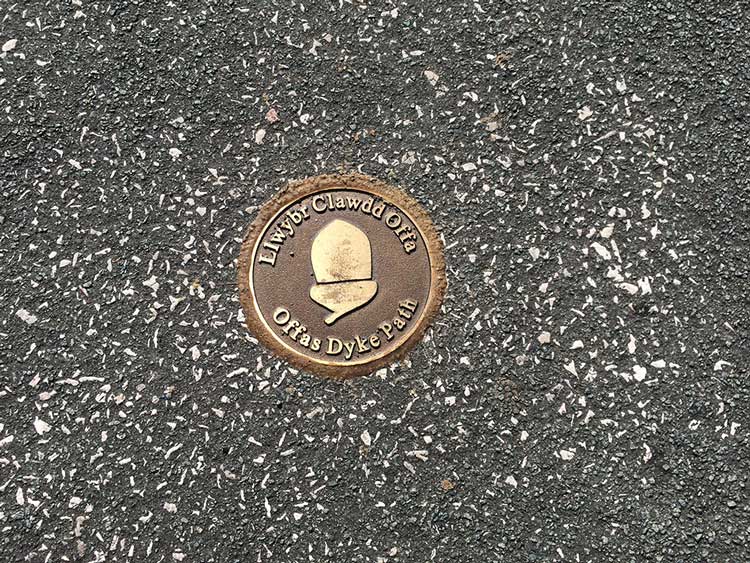 Marker in the pavement

Prestatyn was quite busy today. Apparently Anna saw me as I made my way through the streets and across the busy roads. She tooted the horn but I took no notice! The path took me through the main high street, across a busy road and then started making its way uphill out of town. I was quite looking forward to some hills again. The last 50 miles or so of the Coast Path from Rhos on Sea to Chester had been virtually flat. The run along Offa’s Dyke Path looked quite the opposite.

I was soon climbing steeply up a wooded hillside, through a woodland park and then out onto hillsides above Prestatyn. The going was fairly hard already. Not only were the paths steep, but they were rocky and uneven forcing me to walk a little in places so as not to trip. The views back over Prestatyn and out to the wind turbines in Colwyn Bay were impressive though.

The path makes it’s way around the side of the hill, going up and down some steep steps here and there and through dense woodland before coming out onto a gravelled track. The track took me out onto a minor road, over a high stile into some fields. Here I ran through row upon row of Sugar Beet (I think). 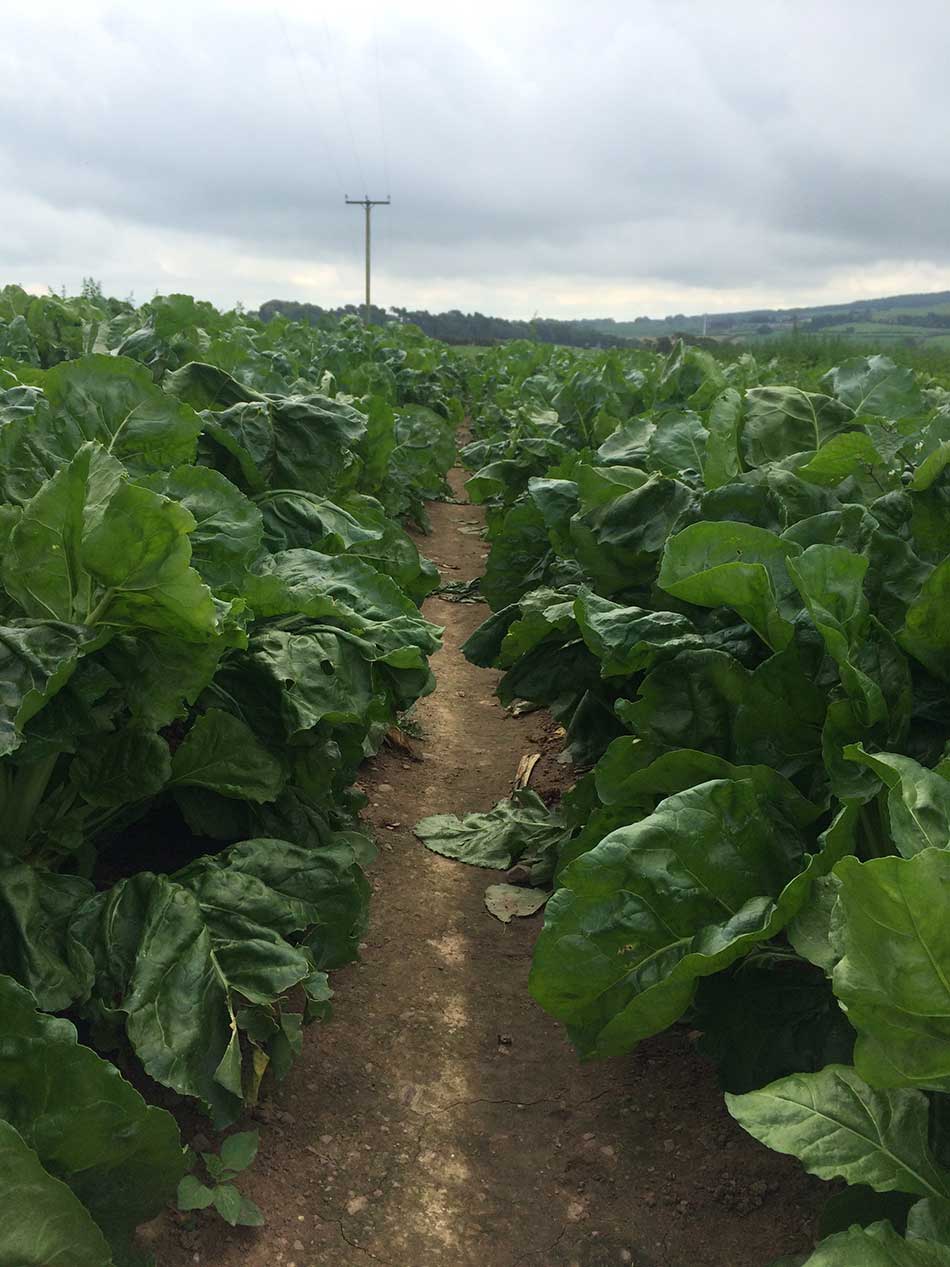 Next the path crosses the main road and took me onto an ancient green lane. I passed a trout hatchery and then started climbing steadily through various fields and past farm buildings towards the summit of Marian Ffrith. There were a few other people out walking along the path now. There were cows and sheep in the fields, the sun was shining and I was feeling OK. There were even some alpacas along one of the tracks. 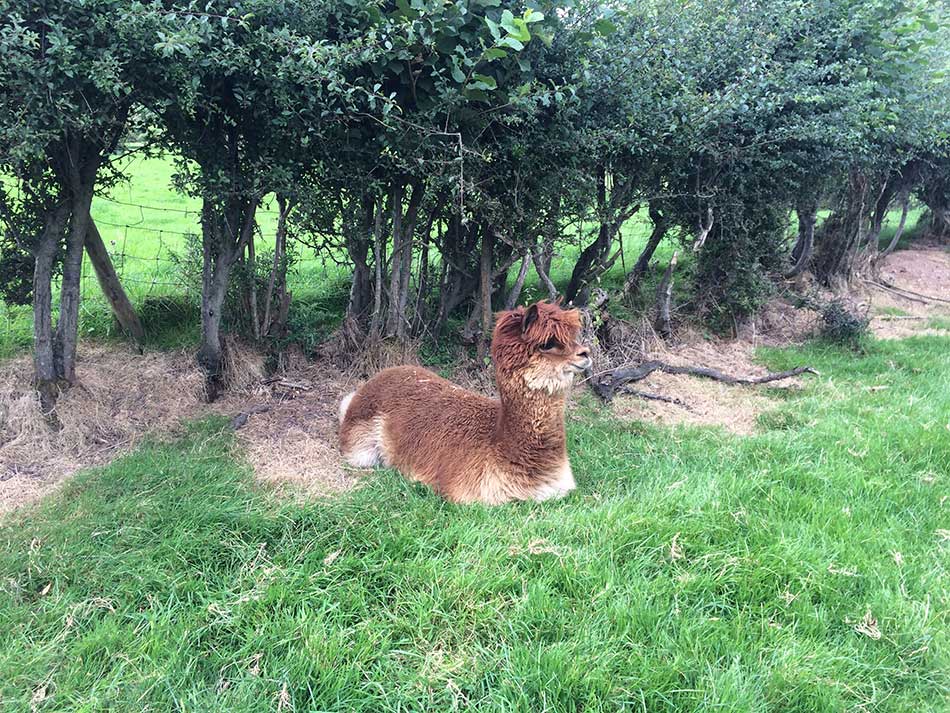 The path took me through field after field, over old stone stiles and through various gates. The way marking was good though, always following that little acorn symbol. 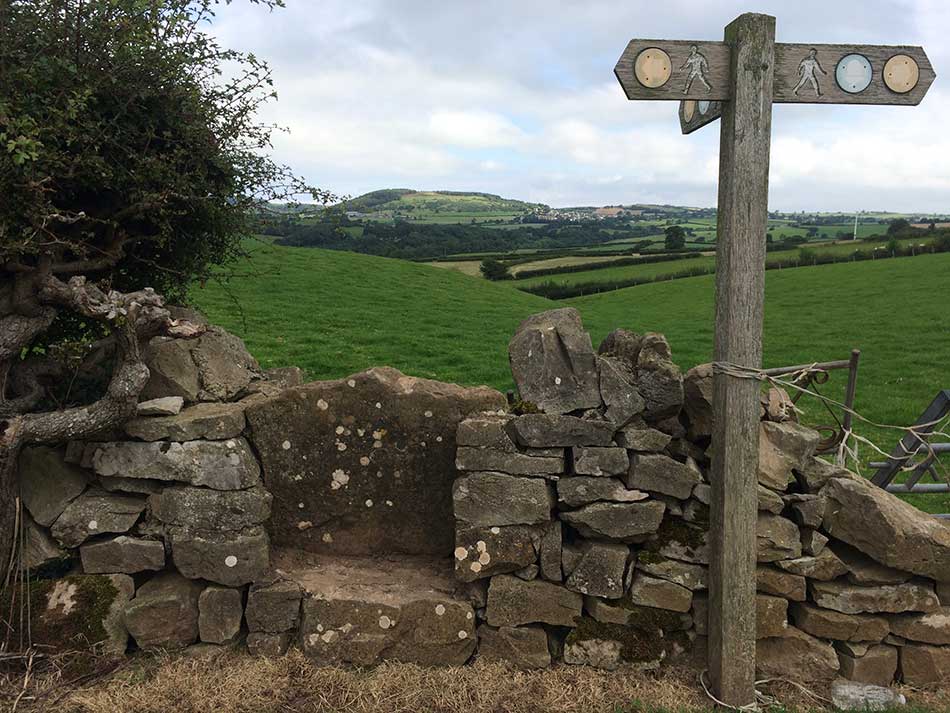 As I reached to top of the hill the ordered fields gave way to more open countryside with no obvious paths. There were occasional low marker posts pointing the way though. 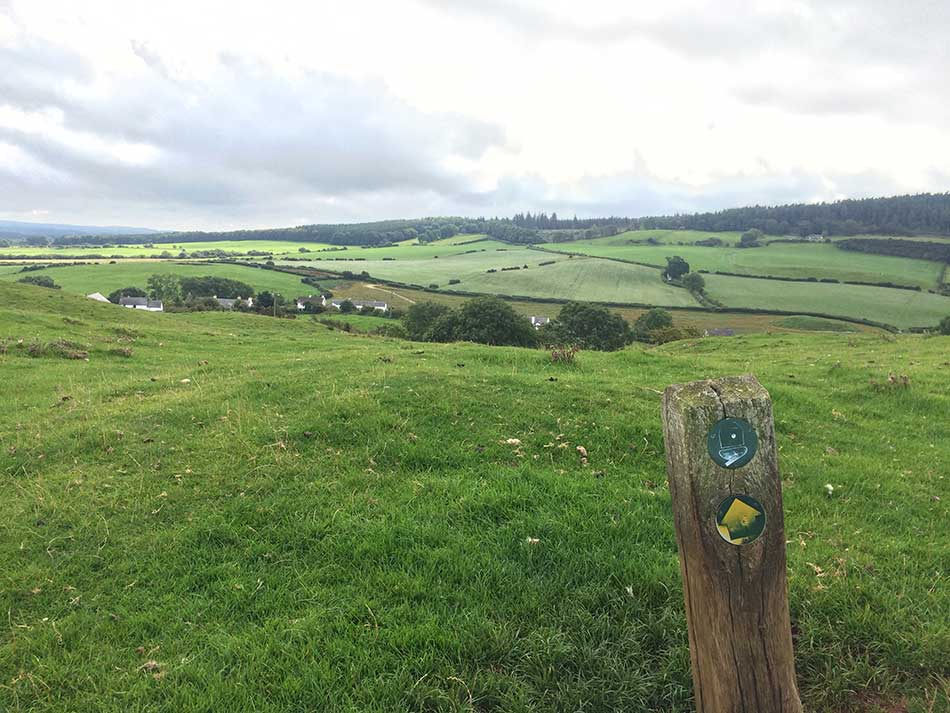 The hard limestone of Marian Ffrith forms a distinctive undulating landscape, there are low burial mounds, caves and quarry pits along with the remains of lead and copper mining. Looking back across this landscape strewn with the remains of ancient industry there are excellent views of more modern industry in the form of the giant turbines of North Hoyle wind farm, 5 miles offshore in Colwyn Bay. I was now leaving the coast behind me though and heading into rural Wales.

View back to the Coast

I descended slightly from this limestone mass and the path took me across more fields over another road and then onto a gently descending road through the trees of Coed Cwm. 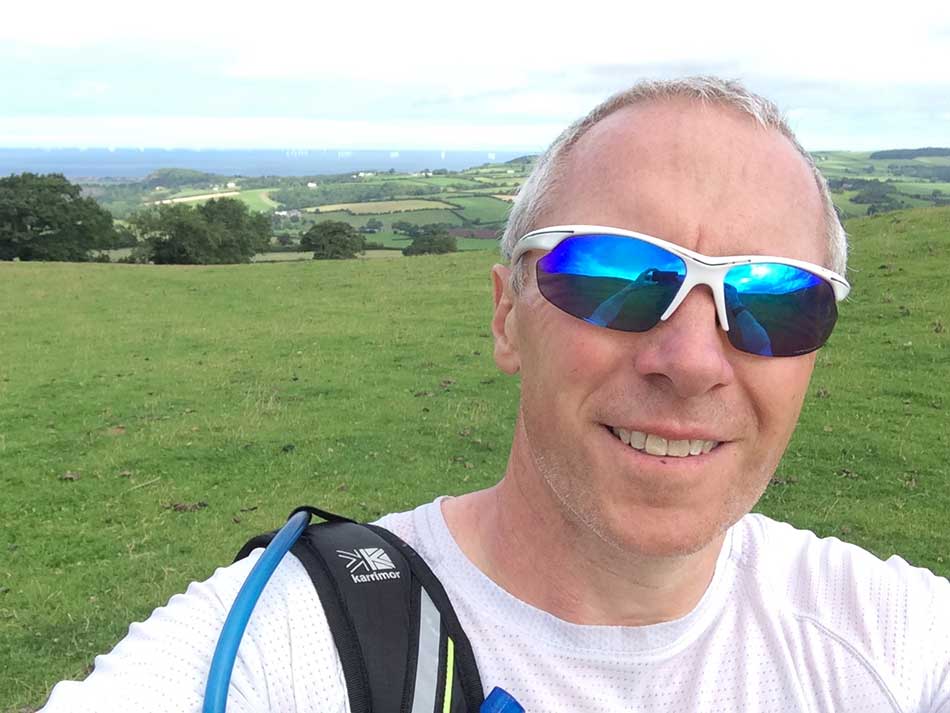 A right turn at Bodlonfa took me out onto hillsides and fields heading towards Rhuallt. This was where I was to meet Anna for a quick pit stop. Apparently the original proposed route of the Offa’s Dyke Path ran through the plantation of Coed Cwm but that was rejected and it now runs around it’s periphery. I was soon descending steeply through a wooded hillside and out onto a small road into Rhuallt. I spotted Anna sat in the car just down the road and popped over to say hello, and have a drink. She seemed quite happy sitting in the sunshine reading her book. 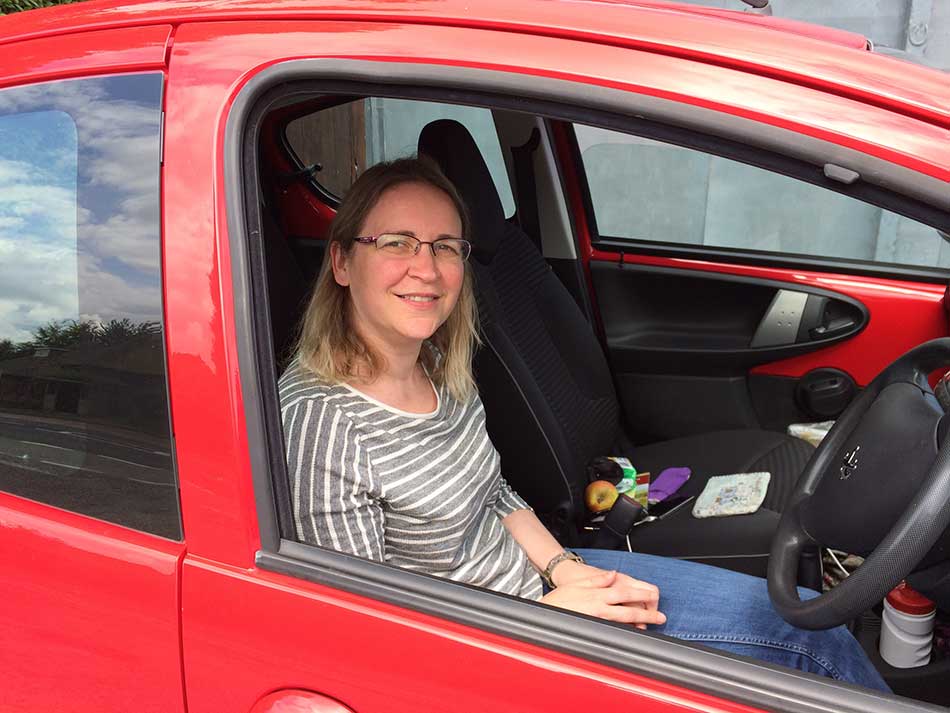 Over the Hill to Bodfari

I didn’t stop for long, just time for a drink and to discuss where we would meet next. I’d ran 8 miles so far, it should only be about 4 more miles into Bodfari. A short drive along country lanes for Anna, a slightly tougher run up into the Clwydian Range proper for me. I left the village of Rhuallt via a steep lane that took me up some steps and out over a footbridge across the busy A55 North Wales Expressway. Immediately across the bridge I turned right to skirt a field where a farmer was busy making hay in his tractor. The next few fields had already been cut as I made my way gingerly across them. The next gate had three horses stood at it. They were stubborn and reluctant to move so I had to push them out of the way to get past and continue on my way.

I was now starting to head up hill steeply through sheep grazed fields. The view behind me had the A55 cutting through it and still the coast and wind turbines in the distance. Up I went, along a steep tarmac road for a short while before turning onto a steep track marked by some interesting puppets. 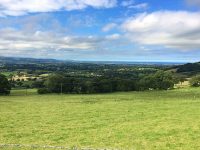 Above Rhuallt and the A55 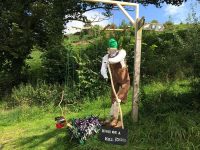 The wooded track gave way to a bracken covered hillside with lovely views of the undulating countryside below and to the southwest.

The tracked opened out onto the top of Moel Maenafa with the summit to my left. It then made it’s way across the top through various fields and along some country lanes before heading up onto the rounded summit of Cefn Du. There were a couple of backpackers sleeping in the afternoon sunshine right by the stile here. I had to jump over one of them to get past.

I was soon descending, off the hill of Cefn Du and then along a narrow road with the Scots Pine plantation of Sodom Covert on my left. I thought it would be downhill all the way to Bodfari from here but as I sped along the road I went past a sign that was half hidden in a high hedgerow. I tracked back and followed the half hidden sign. It took me up some steps and up a steep slope through a woodland. This led to southern edge of the ramparts of Moel y Gaer hillfort. From here it was indeed a short but very steep descent into Bodfari where I emerged out onto the A541 opposite the Downing Arms. I turned right and headed past the Bodfari Gallery into the village. I couldn’t find Anna at first so ran around the village and eventually found her parked up a side street in the shade.

I washed with water from my hydration bladder and got changed by the car. The plan now was to head back towards home, stopping off at Llyn Brenig for lunch. Not a bad start to the Offa’s Dyke Path. Almost 13 miles in total and quite a bit of climbing, but that’s just a taste of things to come. My legs were fairly sore by the end of the day.