We like to stop off on the way home from my parents and generally do so at a garden centre. It gives us chance to maybe buy some plants or other things and have some lunch. It also breaks the journey up a little so that we aren’t driving non-stop for 3½ hours. The trouble is, most of the garden centres seem to be within the first hour of the journey, it would be much nicer if we could find somewhere to stop during the second half of the journey.

We haven’t been able to find anywhere though so usually end up at one of the large garden centres around Newent. There are loads of garden centres there and some of them are huge with decent restaurants too. We have in the past stopped just a little further on at Hampton Court Castle and Gardens. These are lovely and the food was good too, but it’s £8.50 each to get in so not somewhere we can stop every time we are passing. It is about 1hr 20 minutes into the journey though so does break it up a little better.

We also see a sign for a Water Gardens that are pretty much exactly half way on the journey. We were never sure what it was or what they had to offer, or even of their opening times but we looked them up this time and it looked quite good. It is open every day until the end of September from 11am until 5pm and according to the web it had a cafÃ© serving delicious home cooked food too. The decision was made to visit it. I was after some white Irises for the garden. We weren’t sure if they actually sold plants but if they did, then being a water garden it was likely that they would have Irises.

What a delight! The sun was shining and it was a lovely day as we bumped down the little lane to Westbury Mill Water Gardens. There were classic cars parked along the lush green grass and a cooling breeze blowing across the Herefordshire countryside.

We arrived at 1:30pm so decided to start with lunch from the cafÃ©. Panini’s all round served with salad and chunky coleslaw along with a nice cup of tea. We sat outside next to Curl Brook and read some information about the gardens that was on the table.

Essentially they are the private gardens of Richard Pim. On a whim he instructed a friend to find him some land and has been developing it ever since. It sounds as though most of this has been done himself using mini-diggers and lots of hard work. Most of it seems to be an experiment too, he just does what takes his fancy and see’s if it will work. Presumably over the years he has honed this to a fine art as it certainly seems to work.

Strolling in the Garden

Based around a large pond with a little island the garden is criss-crossed with little rills of water. A bog garden at it’s heart, there are loads of water loving plants all perfectly displayed with a natural feel. Paths meander around the garden in the same way as the waterways, crossing them here and there over little bridges.

It’s not huge but there is something new around every corner. On a day like we had it was peaceful and relaxing. You could sit there for hours just taking in the views and listening to the birdsong. As well as the herbaceous plants and shrubs the garden has a number of larger trees too which provide shelter, shade and height and plenty of habitat for birds. We saw a large family of long tailed tits while we were there. The young fledglings were excitedly flitting from branch to branch within the willows.

The gardens become less formal as you move from them opening out into wild flower meadows.

As well a the gardens themselves there are a number of follies. As Richard says on his website

In about 2000 I rediscovered a small iron water wheel which I had removed from the mill pit many years ago, and the urge to use it started a spate of folly building which has been going on ever since.

There are now three follies, all very large, very different and completely useless, but they amuse me and will, I hope, make you smile too.

You can’t miss these follies and the Stone Tower stands prominently as you enter the garden. The small water wheel can be seen powering a series of small buckets that carry water to some pipes at the top of the tower. Presumably inside the tower is a large bucket that gradually fills up and then finally tips out to sen

d water gushing out of the mouth of a gargoyle. We were surprised by just how much water comes out. And surprised at the force with which it comes out.

There is also a dome made from 5000 bottles that send sunlight sparkling into its interior.

There are fountains, arbours, archways and a summer house. 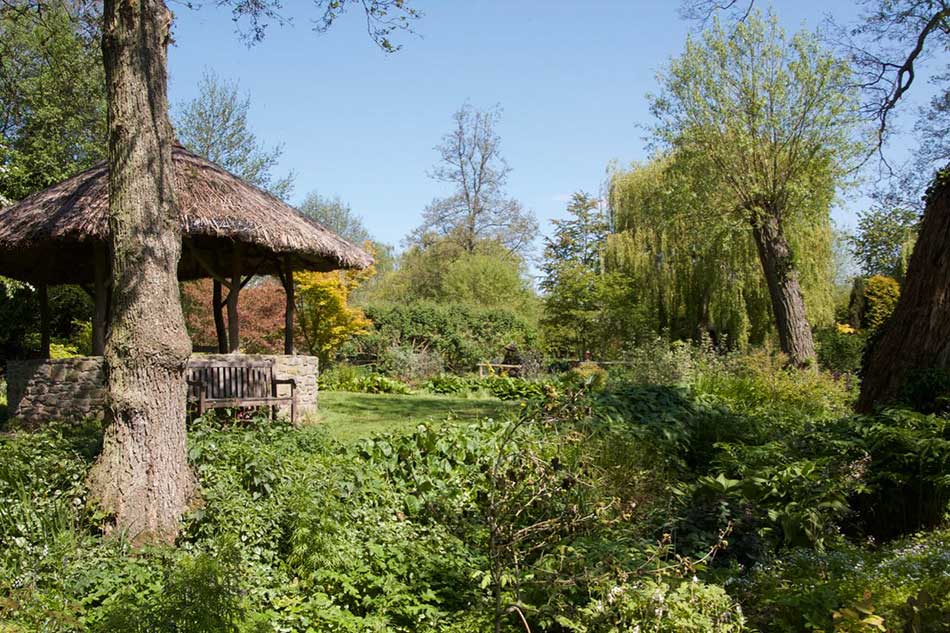 The latest addition to the garden is yet another folly, that claims to be (possibly) the largest water powered cuckoo clock in the world. It’s quite a masterpiece really. Various pipes feed water into a number of containers that all seem to counterbalance each other. Guinness cans, jars of pebbles and a lump hammer are all intricately balanced to create a working clock. The exact workings of it remain a mystery, but every hour a large tank of water is released. This pushes the cuckoo out of the front of the clock and then forces air out of another chamber. This air is pushed through valves to a couple of whistles that are controlled by a music-box style drum giving the cuckoo it’s song. It’s quite a spectacle and guaranteed to put a smile on your face.

View from the Cuckoo Clock

Richard seems to be on the garden working on it most days and is more than happy to have a chat with visitors. The clock doesn’t keep perfect time so he came to adjust it a little while we were there. It seems to me as though he is having a great time tending to his garden, playing with his follies and letting visitors explore his garden.

It may seem a little intrusive having strangers wander around your garden all the time but I guess you generally get ‘nice, quiet, polite’ people at such places. I often wish more people could see my garden – I spend enough time making it look nice that it would be good to share it with others. I don’t think it’s quite up to being an open garden of course and don’t have any delusions of such grandeur, but it’s great to see someone obviously enjoying the small area of Herefordshire that he owns and sharing it with others.

There is also a small garden nursery, so we had a wander around that and bought a couple of lilies. There were plenty of other things that took my fancy, but we didn’t want to spend too much and didn’t quite know where we’d find room for them in the garden either so we left them for another time. We did have another cup of tea and a cake from the CafÃ© though before setting off for the second half of our journey home.