The doctors have told Anna to cut down on gluten somewhat. She’s not gluten intolerant, but cutting it down may help reduce inflammation and therefore help reduce the symptoms of her rheumatoid arthritis. It’s worth a go so we’re trying to eat a little less gluten. We don’t want to miss out on the gooey goodness of chocolate brownies and other cakes though so we’ve been experimenting with various gluten free recipe ideas lately.

It is of course possible to simply use gluten free flour, but there are plenty of other gluten free options too. We’ve bought some gluten free flour but this doesn’t even say what it’s made from. It just says ‘flour from gluten free grains’ on it. It would seem that this can pretty much be used as a gluten free alternative for flour, it just needs a little more liquid than you’d usually use in the mix to make things the correct consistency. I used it yesterday to make a lovely crumble and oat topping for a rhubarb and orange crumble and it worked fine for that. There are loads of other types of flour that you can get as well that don’t contain gluten. There’s a whole list of them here.

When making cakes though we’ve often used ground almonds instead of flour. Not only are almonds gluten free but it adds a nice almondy taste and adds some texture too. So, here’s the recipe.

This gluten free brownie recipe uses ground almonds to produce a deliciously rich, gooey and moist chocolate brownie. It might not hold together quite so well as a brownie made with wheat flour but it’s good enough for us and tastes delicious.

I have been tempted to try it with an extra egg and a little more cocoa but as they’ve tasted so nice as they are it seems silly to experiment further and maybe ruin them.

We have tried it with cashew nuts and walnuts and I’d quite like to try it with hazelnuts as well. Another idea that I’ve come across is swirling some tahina through it just before baking as well. This will not only taste good but should look nice too. Plenty of things to try. 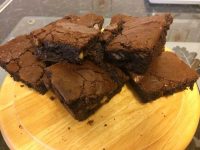 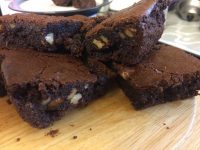 And there you have it, delicious, sticky, gooey brownies without any inflammatory glutens – I don’t think the sugar helps in that respect and the almonds add quite a lot in the way of calories. However the doctors did say to cut down on gluten, not eliminate it and who’s counting calories whilst enjoying brownies?