Conwy to Rhos on Sea

Another day and another chance to complete some miles of my Wales Coast Path run. Although, it has to be said that due to a knee injury it ended up being more of a walk than a run.

Today’s plan was to go from Conwy (where I finished last time) around the Great Orme to Colwyn Bay and possibly on to Pensarn. It didn’t quite turn out that way but it’s rare that things ever go completely to plan. I wasn’t sure how my knee would hold up though as I had some issues with it on a Coast Path run in Dorset a couple of weeks ago and hadn’t really tested it since. I did do a short 4 mile run on the track last week and it felt OK, but I wasn’t convinced that it was going to be today. I did however have a few options for shortened routes should the need present itself, and had told myself that I’d turn back if it felt bad early on in the run.

At least I didn’t have to start off in complete darkness this time as I left home a little later today so as to arrive in Conwy once it was light. I then headed off from the car park, through the town of Conwy and out onto the Quay where I finished last time. It was a pleasant enough day, not cold at around 10ºC, a little overcast and with no wind. Perfect conditions for running. 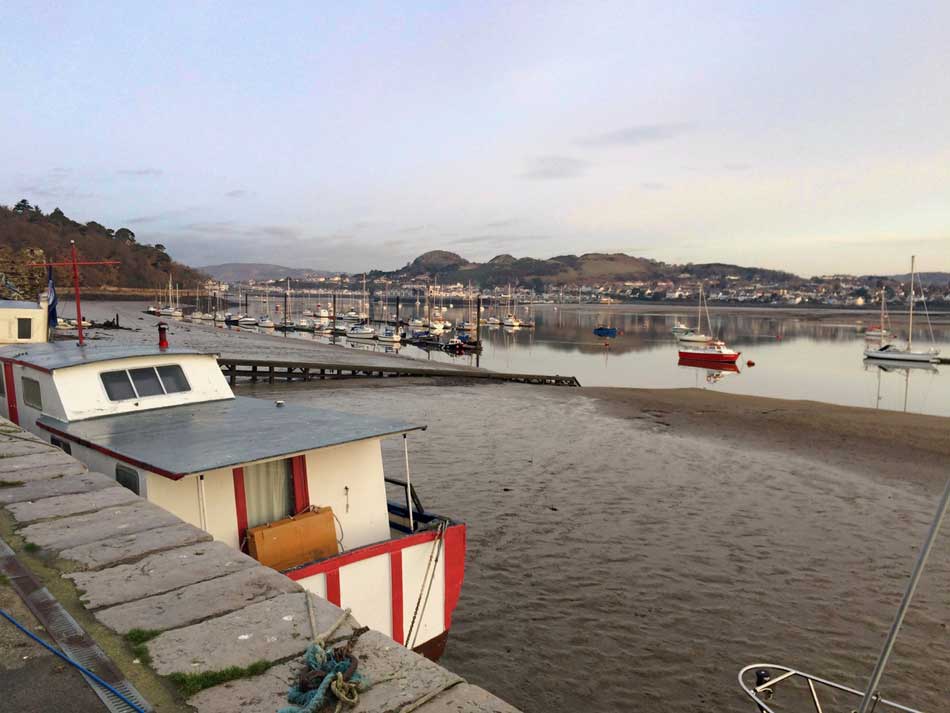 View from the Quay in Conwy

Things started well as I crossed the River Conwy and then turned left towards Deganwy. The still waters of the Conwy estuary were backed by the snow-capped mountains of Snowdonia as fishing boats sent ripples in their wake across what was otherwise mirror-calm water.

Looking back to Conwy Castle 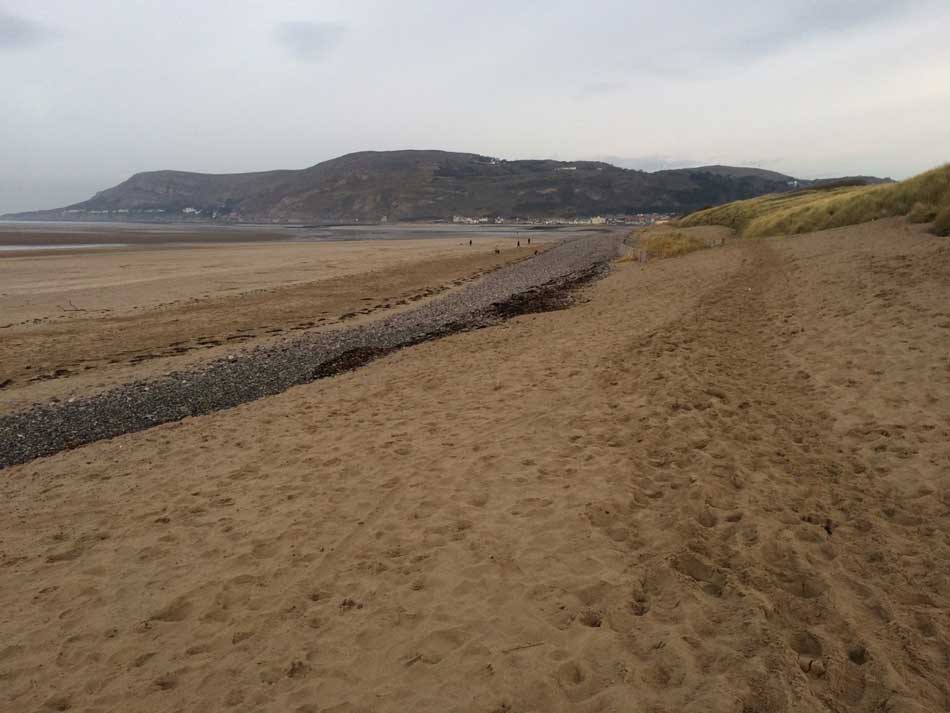 I was only 3 miles into the run and already my knee was hurting so I decided to walk for a while. I guess I should have heeded my own advice and turned back but after a 2 hour drive to get here and therefore a 2 hour drive back I thought I should at least give it a go. I decided that it would be better to just swallow my pride and walk the Coast Path today rather than run it. I did try running here and there along the beach but not for long.

At the end of the Prom, the limestone cliffs of the Great Orme were beginning to dominate the landscape. The route today would take me around this prominent limestone headland. 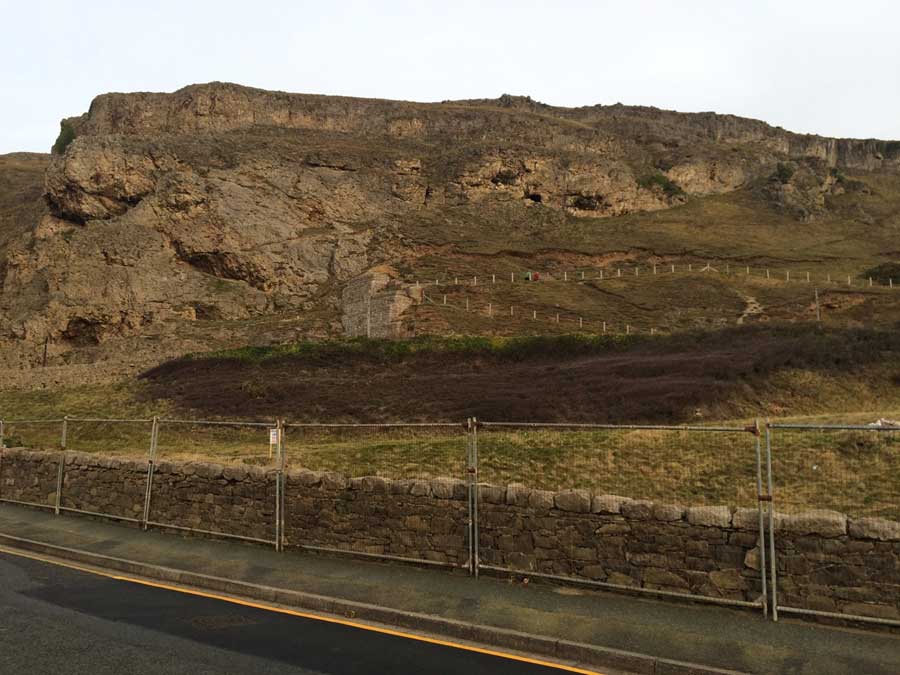 I tried running again once the road started sloping upwards and found that jogging uphill wasn’t too painful. I therefore made my way slowly up the western side of The Great Orme, stopping here and there to take photos of the views out across Conwy Bay whilst being watched by some of the local residents. 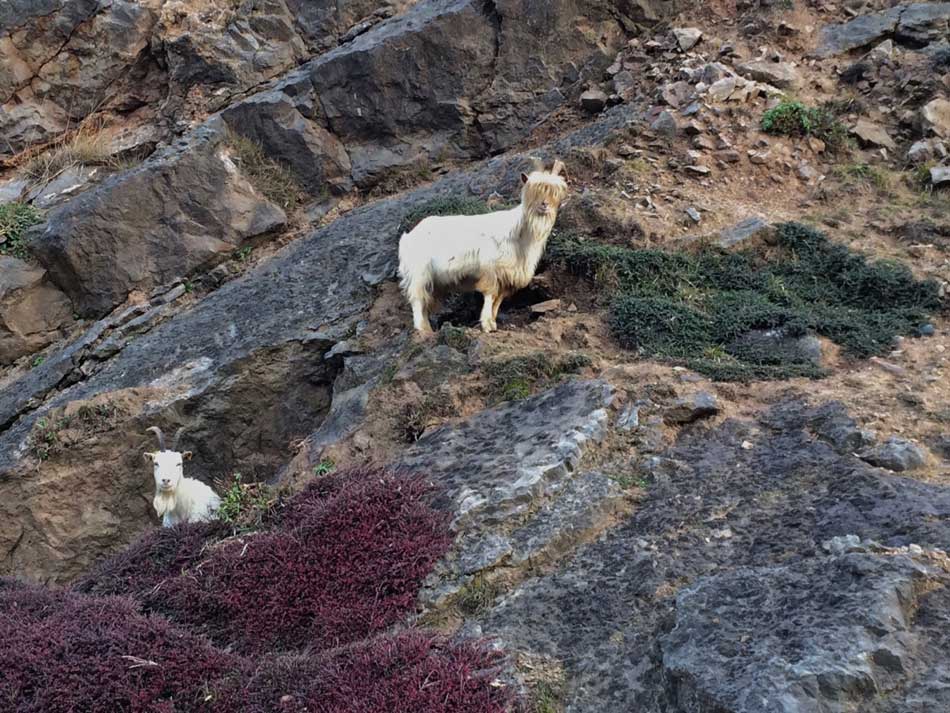 The weather was OK for running but not great for photography. The views were still pretty spectacular though, it must be amazing up here on a clear day.

Whenever the gradient eased off to near flat my knee hurt though so I walked where necessary. Thankfully most of it in this direction was uphill as I made my way along Marine Drive and up the Great Orme. There were coastal views to the left and sheer limestone cliffs to my right. 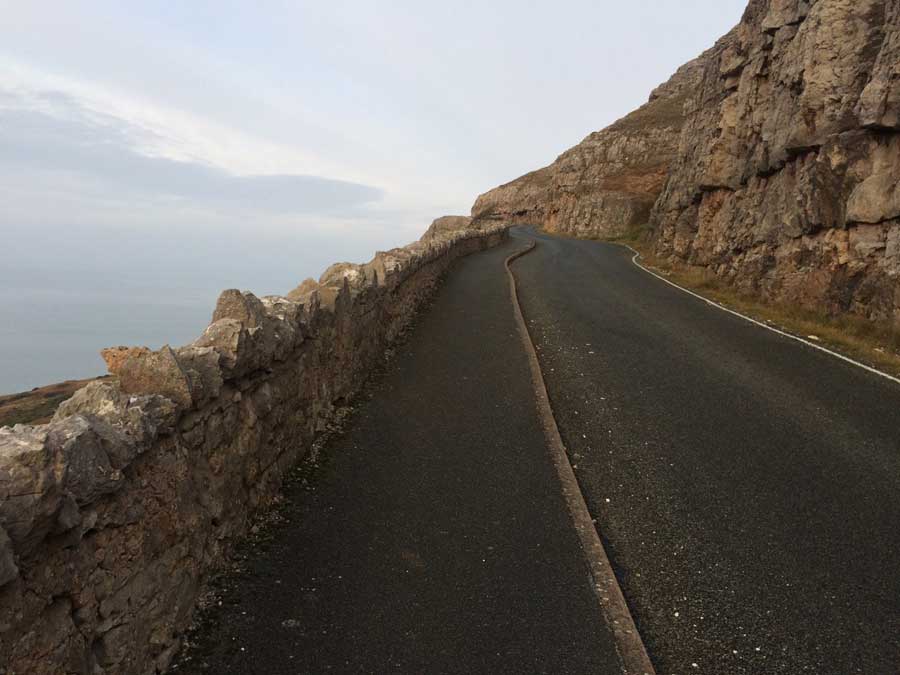 Soon I was at the top and the route down opened out before me. Trouble is, as soon as the gradient became a descent, the pain in my knee got worse. I was still able to jog up the hills and walk along the flat, but the downhills had me hobbling. By the looks of the terrain in front of me I would be hobbling for a while! 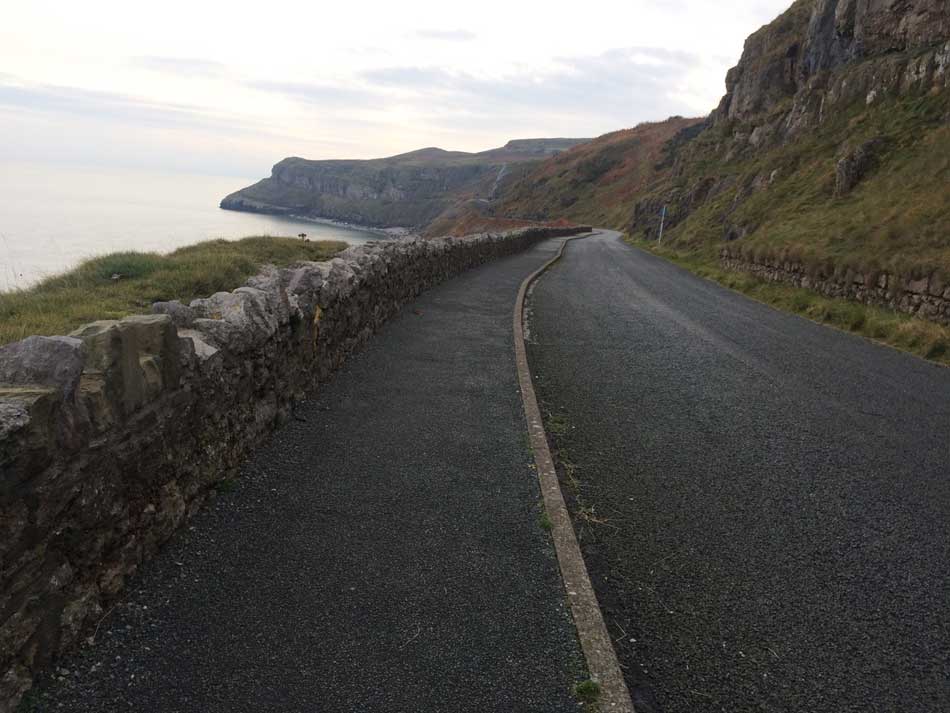 Back Down I go

At least there were nice views down to the sea below me as gulls soared along patrolling the cliffs. 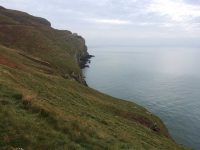 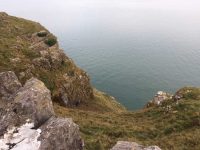 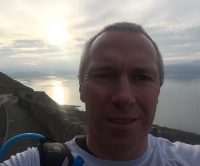 Eventually after a long descent that took me past many sheer cliffs with countless climbing routes on them I rounded a bend. The East shore of Llandudno with its long Victorian Pier and row upon row of seafront hotels presented itself in front of me.

At 2,295 feet (700 m) the pier is the longest in Wales and the fifth longest in England and Wales. The pier had its origins in a much shorter pier of just 242 feet (74 m) built on 16 wooden piles, opened in 1858. The present pier, built for the Llandudno Pier Company by Walter Macfarlane of Glasgow using iron castings from the Glasgow Elmbank foundry, was opened to the public on 1 August 1877. 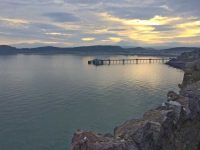 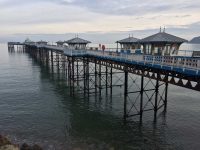 I passed a few small caves and went under the Marine Drive gatehouse and made my way to the huge promenade of Llandudno. I hadn’t seen many people whilst on the Great orme, but I was now thrust into Llandudno where people were all out walking, cycling and running along the prom. There was even someone on a strange one-wheeled motorised skateboard thingy!

It was of course completely flat along the prom. This was better than the descent but I still couldn’t run so I walked my way along, taking in the sights and sounds of Llandudno and admiring the architecture. The prom is huge, as wide as a motorway and not too busy today, and it goes on for quite  way too. Eventually though I came to the end and started making my way up onto the Little Orme.

I was able to jog a little as I climbed onto the Little Orme. The Coast Path then took me away from the road and steeply up onto the shrubby ground of the Little Orme. There was evidence of limestone quarrying here and there and some views out to the towns of the North Wales coast. I could see Penrhyn Bay, followed by Rhos-on-Sea and then Colwyn Bay as the North Wales coast stretched off into the distance. 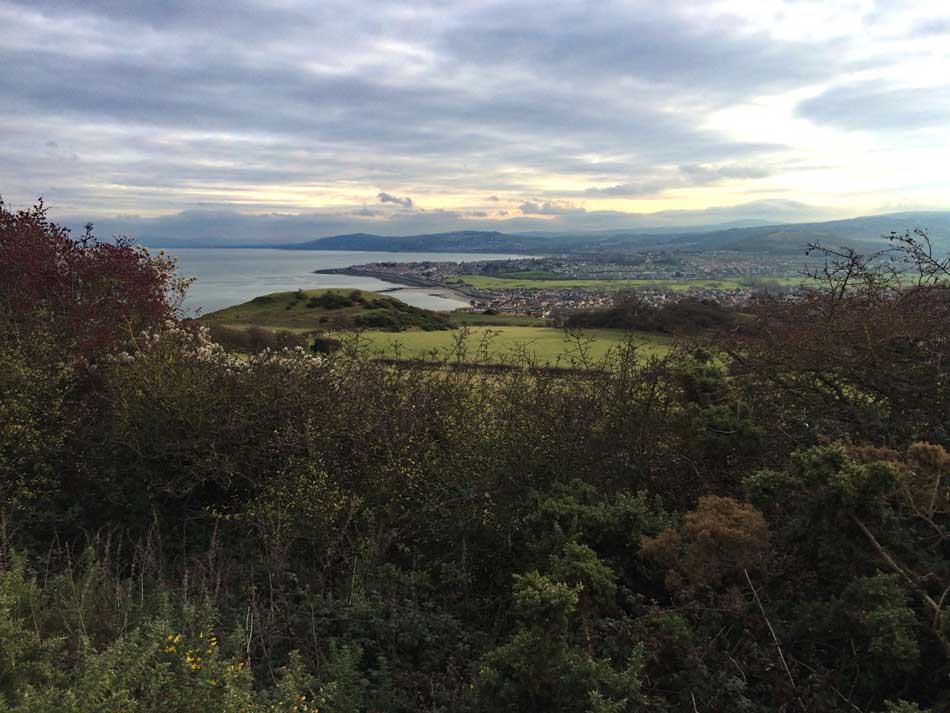 The little detour around the Little Orme was the only time that I really had to follow signs as until now the Coast Path had simply hugged the coastline and followed the road. I was also following the North Wales Path at the moment, which shared it’s route with the Wales Coast Path. 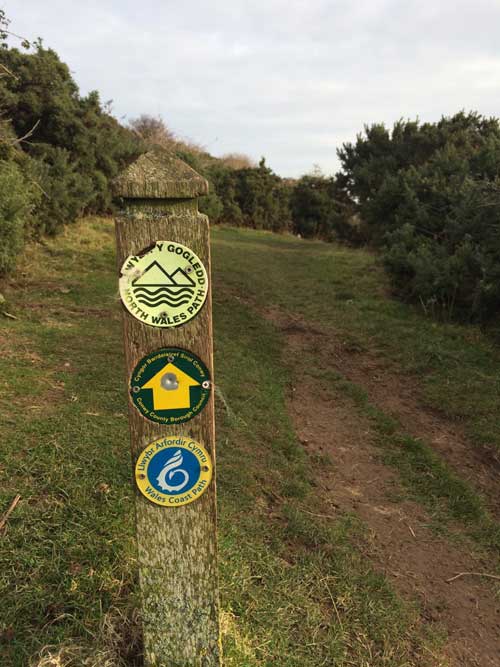 The only problem was that the steep climb up onto the little Orme was followed by an even steeper descent which had my knee in agony and I was reduced to a hobbling, limping wreck once again. 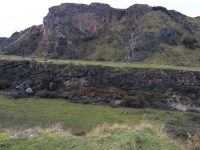 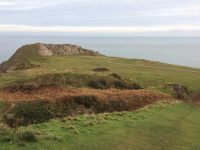 The eastern side of the Little Orme was dominated by limestone quarries. It did at least flatten off as I made my way down onto the sands of Penrhyn Bay. 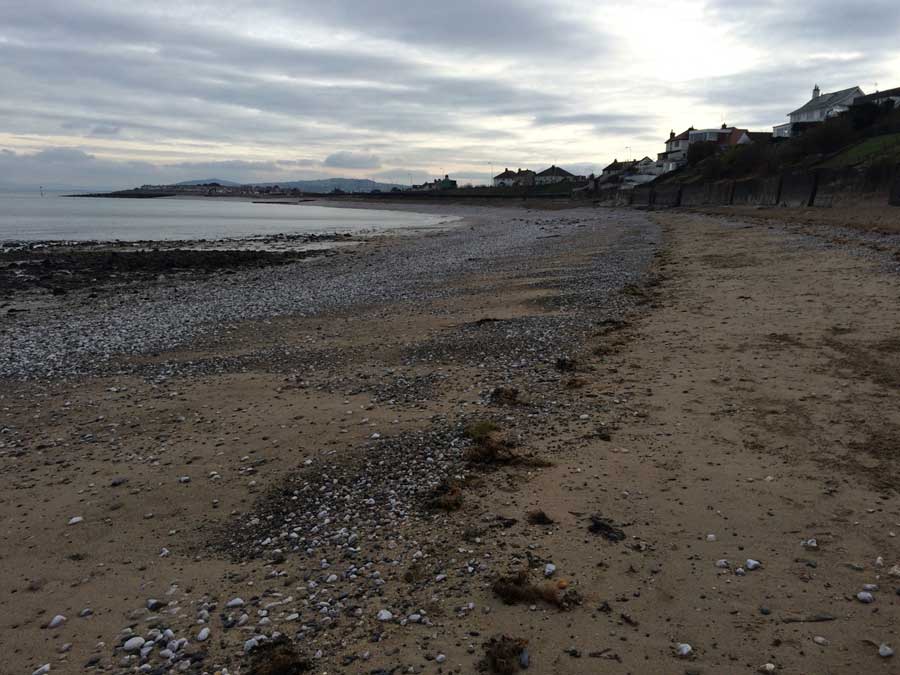 I walked along the sands for a while and then made my way up onto the sea wall. From here, the Coast Path followed the sea wall atop the beach. The beach had been fortified with huge boulders all along it’s length. I passed the tiny little chapel of St Trillo’s and made my way around into the lively seaside town of Rhos-on-Sea. 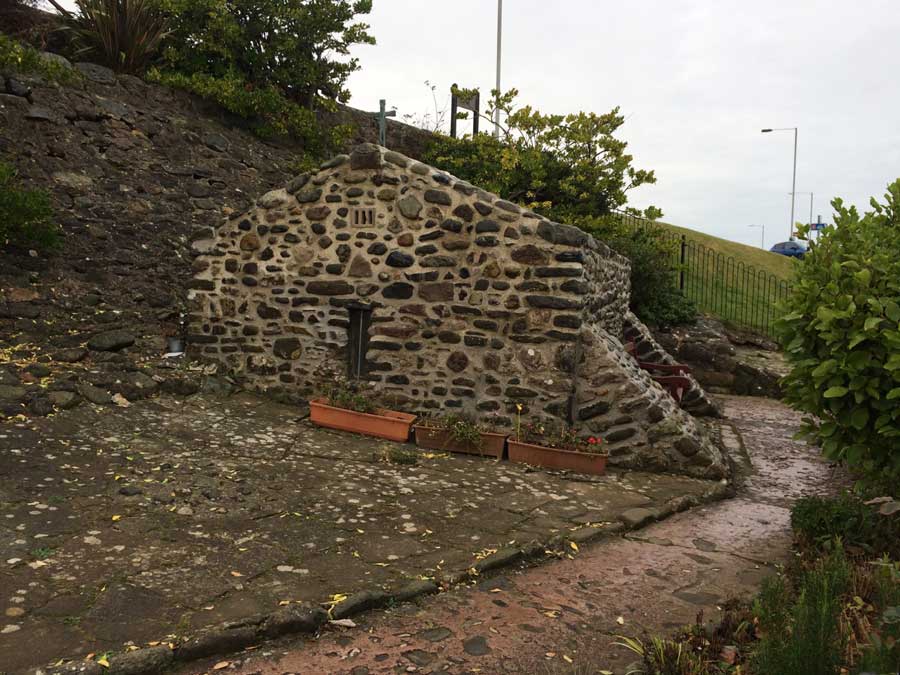 As I came into Rhos-on-Sea I spotted buses that would take me back to Conwy, so rather than continue on for the extra mile to the train station at Colwyn Bay I decided to call it a day. My knee was sore, the bus would be cheaper than the train and it would take me all the way to Conwy rather than to Llandudno Junction. It did mean that todays route was only 13.8 miles, but they all count and I’ve made it a little further in my quest to circumnavigate Wales.

I think I will have to leave it there for a few weeks though to give my knee time to heal. So, although I’d like to get this North Wales section finished and I only have 45 miles to this end of the Wales Coast Path I may not be able to continue until the New Year. Once I do, there will probably be at least 3 more days until I finish the North Wales section. I’ll then have to start researching the Offa’s Dyke Path which will take me along the border between Wales and England, and down to South Wales where I can continue once again with the Coast Path. There’s still plenty to look forward to once my knee is OK.