You may have noticed that although I’ve still be fairly active, cycling, running around the coast path and such like, I haven’t been posting about any proper training and certainly nothing about any races. This is all due to the fact that I’ve had a few niggling injuries.

Last year it was plantar fasciitis, this year I’ve been unable to swim since Christmas thanks to an ongoing shoulder injury. I don’t even know what is wrong with my shoulder yet, but although it’s still sore, it does seem to have eased up a little over the past few weeks. I even managed a short open water swim on Monday afternoon as a bit of a test.

I don’t think the swim made it any worse, so that’s a step in the right direction. It wasn’t too slow either really, all things considered.

I pulled out of (actually never entered) the races I had planned this year thanks to the shoulder injury and with nothing to aim for have been running and cycling for recreation rather than training since then. I’m certainly not ‘unfit’, but I’m not ‘fit’ either and I’m definitely not fast or race ready. I am however signed up for one race – The Fishguard Ocean Lava Half Ironman. I pulled out of this last year because of my foot but as I’d already paid the entry fee my place was deferred to this year. I can’t really defer it again, so I either turn up and do it, or lose out on the entry fee. At the moment my plan is to go with the former. I’m hoping to turn up and do it on the day, but I will be entering it with a different mindset to races I’ve done in the past. I won’t be in it to win it, or even to post a good time, I’ll just be aiming to have a good day out and to get my money’s worth. It’ll be my first attempt at a longer distance race anyway (it is 4 times the distance of any triathlon I’ve done before), so getting around the course will be the first priority.

With that less than 6 weeks away and having done no real training, it does probably mean I should at least try to get a little in shape. It won’t be a race but I don’t want it to destroy me either! With that in mind I thought I’d do an FTP test on Tuesday just to see where I was on the bike. I haven’t done one for a while and in the past I’d done them with slightly odd settings between by turbo trainer and the TrainerRoad software. Essentially I used to have different settings on the turbo trainer to what I had set in the software as that worked out better with my gearing when it came to actual workouts. However, I’ve been using it lately with the turbo trainer and software set with matching figures so thought I’d stick with that for the FTP test. It should also provide a more accurate power measurement and power to weight ratio readings.

So, after a relative rest day on Monday (just a short swim and a SUP Surf), I started Tuesday morning with a 20 minute FTP test. This consists of a warm up, some calibration so as to get things set up as repeatable as possible, a 5 minute all out effort, 5 minutes easy and then a 20 minute effort as hard as you possibly can. It’s kind of fun, but painful all at the same time. But, the result was: 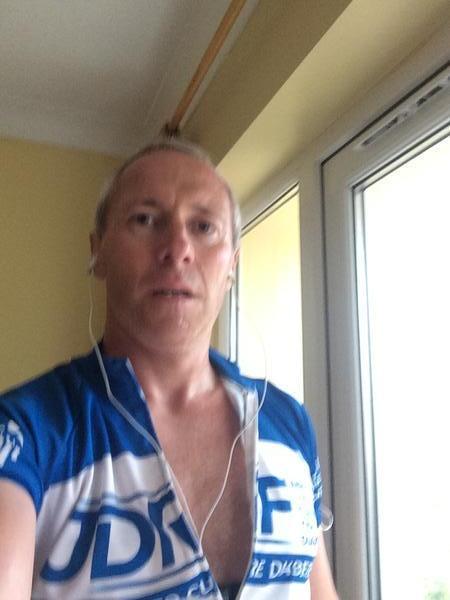 It also means that any subsequent workouts on the turbo trainer will of course now be at a higher FTP and therefore just that little bit harder. 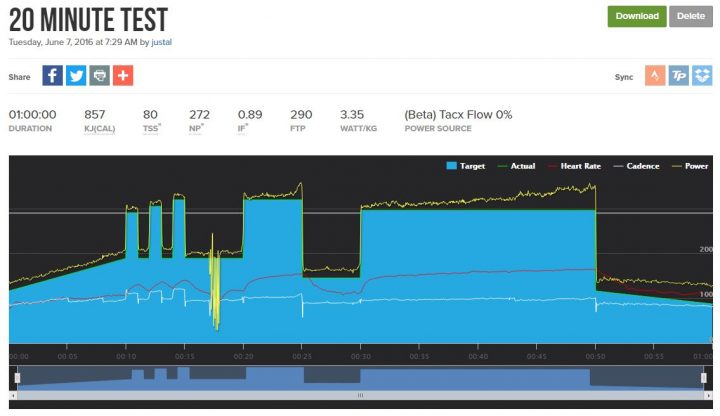 Running in the Rain

I then headed out for a run. It was misty and murky when I set off and I had an interval session planned. Again, something a little different to the steady state runs I’ve been doing lately and definitely different to the long, slow, rucksack laden coast path runs. Today’s session was a 10 minute warm up, followed by 5x 2 minute hard intervals with 2 mins recovery between intervals. All followed by 10 minutes easy running.

It was good to be running at a slightly faster pace at first, but by the end of it the 2 minute hard intervals seemed to be lasting longer than I would have liked and the 2 minute recovery intervals seemed to be getting much shorter! It also started raining in quite epic style partway through my run. I was soon splashing through standing water as water streamed down my face and soaked me to the core. I do like running in the rain, but this was mad!

What with the higher intensity and the hardcore aspect of running in a downpour it felt a little more like ‘training’ than recreation. Good fun all the same and that’s the idea. Getting the balance right between trainign and recreation and keeping it fun. It may not make me fast and I might not be winning any races but hopefully it keeps me fit, injury free and at least able to participate in races should I have the desire to do so.